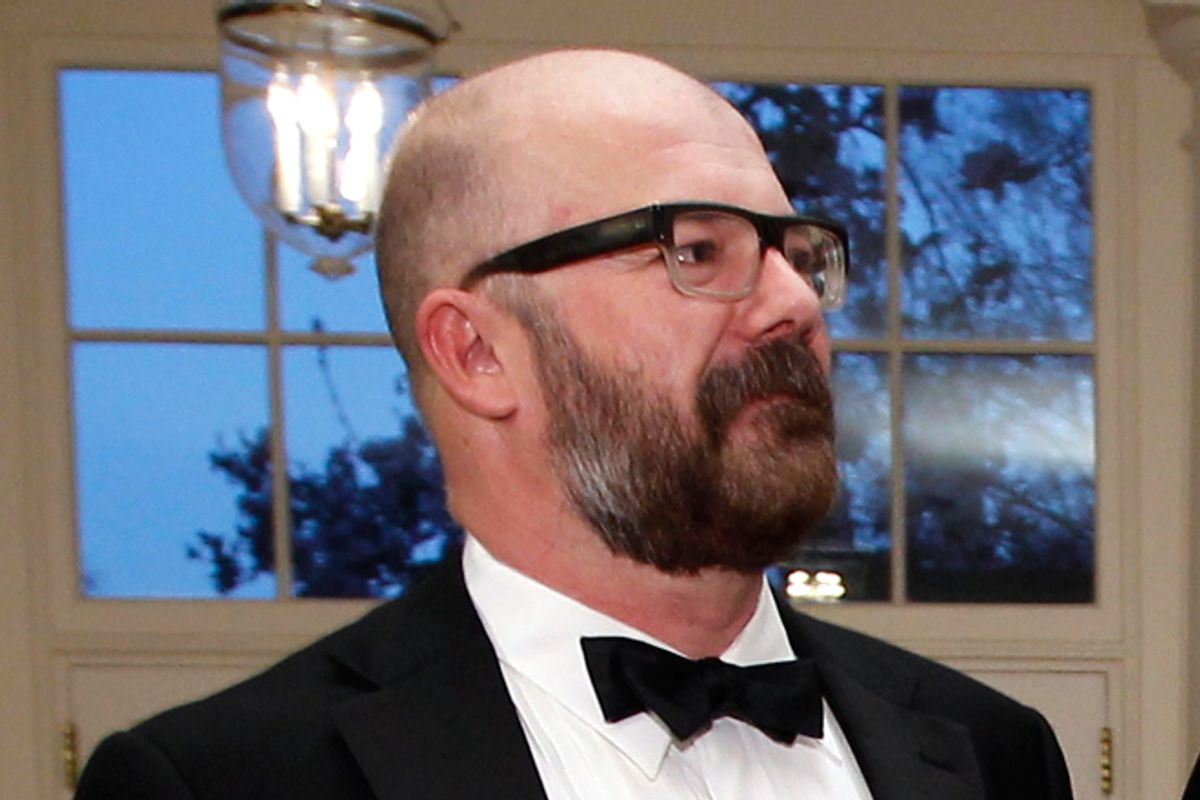 Andrew Sullivan -- who has become the most reliable media hagiographer of an American President since . . . . the 2002 version of Andrew Sullivan under President Bush -- spent the past three years continuously insisting that President Obama's opposition to same-sex marriages was largely irrelevant ("We will win not by begging presidents to back us (they have no role in a matter involving state legislatures, governors and courts")). Based on that view, he constantly berated gay groups and gay activists for complaining about Obama's opposition to marriage equality: "this desperate desire among some gays for some kind of affirmation from one man is a little sad," he wrote just last week. But that was when President Obama opposed same-sex marriage, so defending the President required one to voice that position.

Last week, everything changed. President Obama "evolved" into a supporter of same-sex marriage. So now let's hear what Andrew Sullivan has to say on this topic. The day Obama announced his reversal evolution, Sullivan wrote that he was "uncharacteristically at a loss for words"; that " it reaffirms for me the integrity of this man we are immensely lucky to have in the White House"; "that's why we elected him. That's the change we believed in"; and that "there are tears in my eyes." He then spent the next week on his blog hailing Obama's courage, integrity and greatness as reflected by this decision of historic significance (the same decision that he spent three years insisting was irrelevant before Obama made it). He then penned this week's Newsweek cover story in which he wrote that "when I watched the interview, the tears came flooding down" and "to have the president of the United States affirm my humanity—and the humanity of all gay Americans—was, unexpectedly, a watershed." Yesterday, he went on The Chris Matthews Show, and this actually happened: 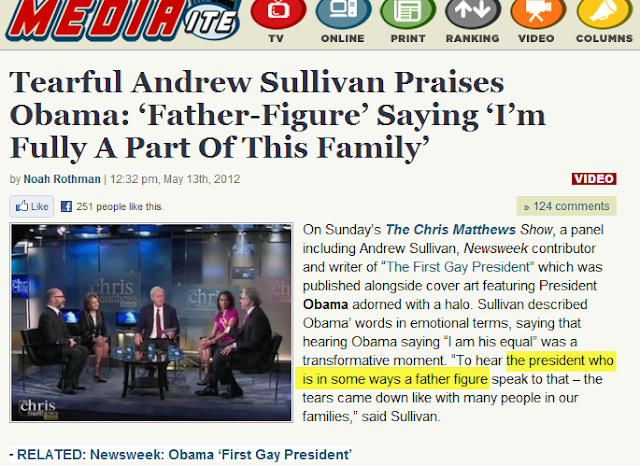 That's from the same person who, to defend anti-gay-marriage Obama, has been writing things like: "this desperate desire among some gays for some kind of affirmation from one man is a little sad." I've long defended Sullivan as much as anyone; I consider him a friend; and I understand that as one of the first marriage equality advocates, he might be more emotional than most about this admittedly emotional issue. Still, this has to be one of the creepiest episodes in American punditry in some time, and that's true for two independent reasons:

First, it shows the dedication some media figures and Obama followers have to glorifying and justifying whatever the President does, even when the acts being defended are the exact opposite of one another. Sullivan spent three years aggressively scorning everyone who criticized Obama's marriage position on the ground that it's irrelevant and inconsequential what the President thinks about marriage equality, even arguing that it's "sad" to watch gays seek presidential approval; then, the minute Obama announces that he supports same-sex marriage, Sullivan takes the lead role in depicting this act as the Peak of Human Courage and Integrity, one of monumental significance, while he all but crusades for Obama's instantaneous Sainthood. Given how effusive Sullivan now is about the incalculable importance of Obama's support for same-sex marriage -- for gay youth, for equality generally, for all that is Good and Noble in Our Politics -- doesn't he at least owe an apology to all those gay activists who endured Sullivan's condescending scorn when they were trying to pressure Obama to "evolve"?

But the more important point is that it's dangerous, literally, to be willing to twist one's own views this way to glorify whatever the leader does at any given moment. Sullivan has been willing to criticize Obama more than most of the President's most devoted followers, but this complete turnaround in the flash of a presidential gesture is hard to watch.

Second, and much more important, it is wrong on every last level to relate to the President as a "father figure." There was a time when I thought Sullivan's serial blinding reverence for political leaders -- Reagan and Thatcher, then Bush 43, now Obama -- was the by-product of some sort of transferred British need to be subjects of a monarch. But I don't think that theory explains much, since all kinds of native-born Americans do the same (remember all this and this?). I was supportive of Obama's marriage announcement because of the political benefits it would engender, not because it gave me some kind of personal validation that my father has finally accepted who I am. The President is not Our Father; he's a politician who, like all people wielding political power, is in great need of constant critical scrutiny and adversarial checks -- from all citizens, but especially media figures. Relating to him as some kind of guiding paternalistic authority is, I'm sorry to say, really quite warped. But it's far from uncommon, and that explains a lot.

UPDATE: Bob Somerby appears in comments and writes: "This is the homeland; the president is the father. Why is this hard to follow?" Language, of course, reveals much about how and what we think, which is part of why I find this so disturbing.

UPDATE II: I don't have the slightest problem with Andrew Sullivan or anyone else being emotional about Obama's expression of support for same-sex marriage, and this post has absolutely nothing to do with that issue, so if you're one of those people who think that I'm objecting in any way to his display of emotion and intend to reply to that, please re-read what's written here, with an emphasis on the first three paragraphs, to see that what's being discussed here has no remote relationship to that issue.

UPDATE III [Tues.]: Sullivan referenced and implicitly criticized this critique (while uncharacteristically refusing to link to it); my reply to him, sent by email, is here.

UPDATE IV [Tues.]: Sullivan now has a more detailed and direct response, though my email reply applies equally to it.