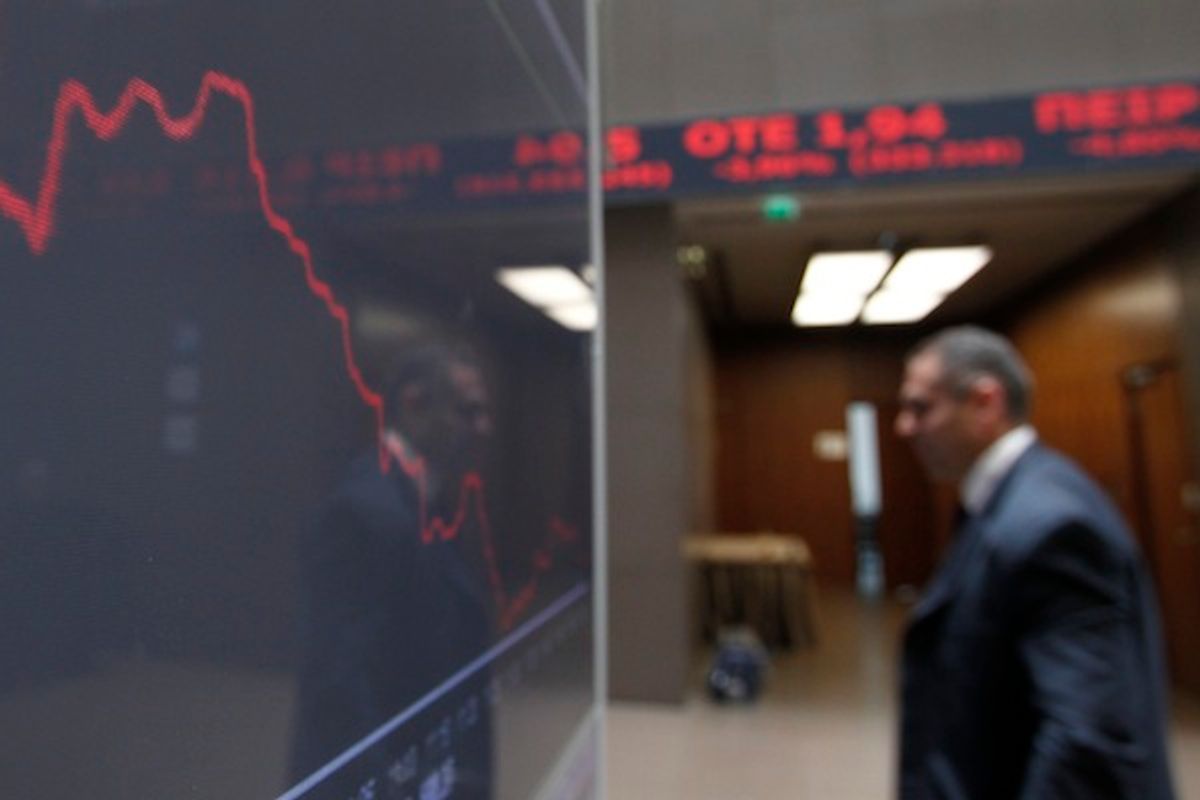 A man is reflected in the chart with stock prices at the Greek Stock Exchange in Athens, Monday, May 14, 2012. (AP Photo/Petros Giannakouris) (AP)
--

BRUSSELS – It was the scenario never to be named, a prospect so terrible that the mere mention of it would conjure up doom and destruction for the eurozone.

In the last few days, however, the risk that Greece could be forced out of the currency bloc has become too real to be ignored. The once-taboo subject has become an unavoidable topic of conversation among Europe’s financial leadership.

“The price would be very high if they decided to leave the euro,” warned German Finance Minister Wolfgang Schauble, before talks Monday with his eurozone partners.

Governors of three central banks have openly raised the option of a Greek exit.

“Technically it could be managed,” said Patrick Honohan, the Irish governor. “It is not necessarily fatal, but it is not attractive.”

Even Jose Manuel Barroso, the usually cautious president of the European Commission, had a stark warning for the Greeks: “If a member of a club does not respect the rules of the club, it’s better not to remain in the club,” he told Italy’s Tg24 TV last week.

In the corridors of the European Union’s headquarters the fear now is not only that Greece could be forced out, but that the resultant chaos would spread quickly to Portugal, Ireland, Spain and beyond, causing a collapse of the euro currency and a generalized economic meltdown.

The prospect has more than just Europe worried. For all its problems, the eurozone’s $13.6 trillion economy remains the world’s second largest. Its collapse would risk a global economic earthquake making Lehman Brothers look like a mild tremor.

“This is not just about Europe, there is a possibility that it may spread to the global economy,” Japanese Prime Minister Yoshihiko Noda told Dow Jones Newswires over the weekend. “This is the biggest downside risk factor for the Japanese economy.”

The doomsday scenario is not yet inevitable, but unless European leaders get their response right, the dominoes could start to fall very quickly.

Greece could be forced into a rerun of its inconclusive May 6 election in mid-June. Polls predict an even stronger showing for the mishmash of Trotskyites, neo-Nazis and other anti-austerity groups who surged in support triggered the current impasse.

They want Greece to renege on commitments to cut its huge budget deficit in exchange for the 130 billion euro bailout. Germany and other creditors have warned that would lead to a freezing of bailout payments. A bankrupt Greece would then be forced to drop out of the eurozone.

As that prospect draws near, savers facing the threat of exchanging their euros for a much weaker new national currency could spark a run on the banks and send their money to Germany or some other safe haven. Some reports suggest Greeks have already transferred 250 billion euro out of the country.

Renewed fears over Greece are already having a major impact on other at-risk countries. Portugal’s stock index hit its lowest level since 1996 on Monday and Italy and Spain both saw rates on their bonds rise to the highest levels this year.

If Greece heads toward a euro exit, creditors would send those rates soaring, casting doubt on the nations’ ability to pay their debts. Savers in Portugal, Ireland and Spain could also take fright and move their money abroad. Shaky banks would implode. G-8 economies Italy and France would come under threat.

Saving the euro, at that point, would need a massive intervention by the European Central Bank, backed by increased firewall funding from Germany and other more stable northern European nations to prop up the southerners. An agreement to share debt burdens or devalue the euro may also be required.

It is by no means certain, however, that skeptical voters in Germany, the Netherlands and Austria would go along with that. The incoming Socialist administration in France and restless political parties in Italy could also rebel against austerity measures which the northerners are likely to insist upon as part of a new financing deal.

Ireland could rule itself out of any future EU bailouts, if its austerity weary voters reject the EU’s fiscal discipline treaty in a May 31 referendum.

As eurozone finance ministers gathered in Brussels on Monday evening, officials in Brussels were acknowledging that the risk of a Greek exit — they are calling it the "grexit" — is now as great as at any time since the crisis erupted in late 2009.

Jean Claude Juncker, the Luxembourg Prime Minister who chaired Monday's meeting of eurozone finance ministers, insisted, however, that other EU members were not seeking to push Greece out.

"Nobody was mentioning an exit of Greece from the euro area (in the ministerial meeting). I am strongly against," Juncker told a news conference. "I don't envisage, not even for one second, Greece leaving the euro area. This is nonsense. This is propaganda."

Given that most Greeks say they want to keep the euro, European leaders are hoping they will return to mainstream politicians if there is a second election in June.

For that to happen, leaders in other European countries may have to take a gamble and intervene directly in the election campaign by making clear the vote will be in effect a referendum on staying in the eurozone.

"Without a Greek commitment this (bailout fund) won't work, and this is the responsibility of Greek politicians," Olli Rehn, the EU's economics commissioner, said after the eurozone ministers' meeting. "The future of Greece and the welfare of its citizens lie more than ever on the shoulders of Greek politicians."

There is a risk that more foreign lecturing to the Greeks could backfire if voters rebel against yet more outside interference, but the EU is rapidly running out of options if it wants to keep the eurozone together.