If you want to know how drones will change America, look to the Jewish State -- where they're already widespread 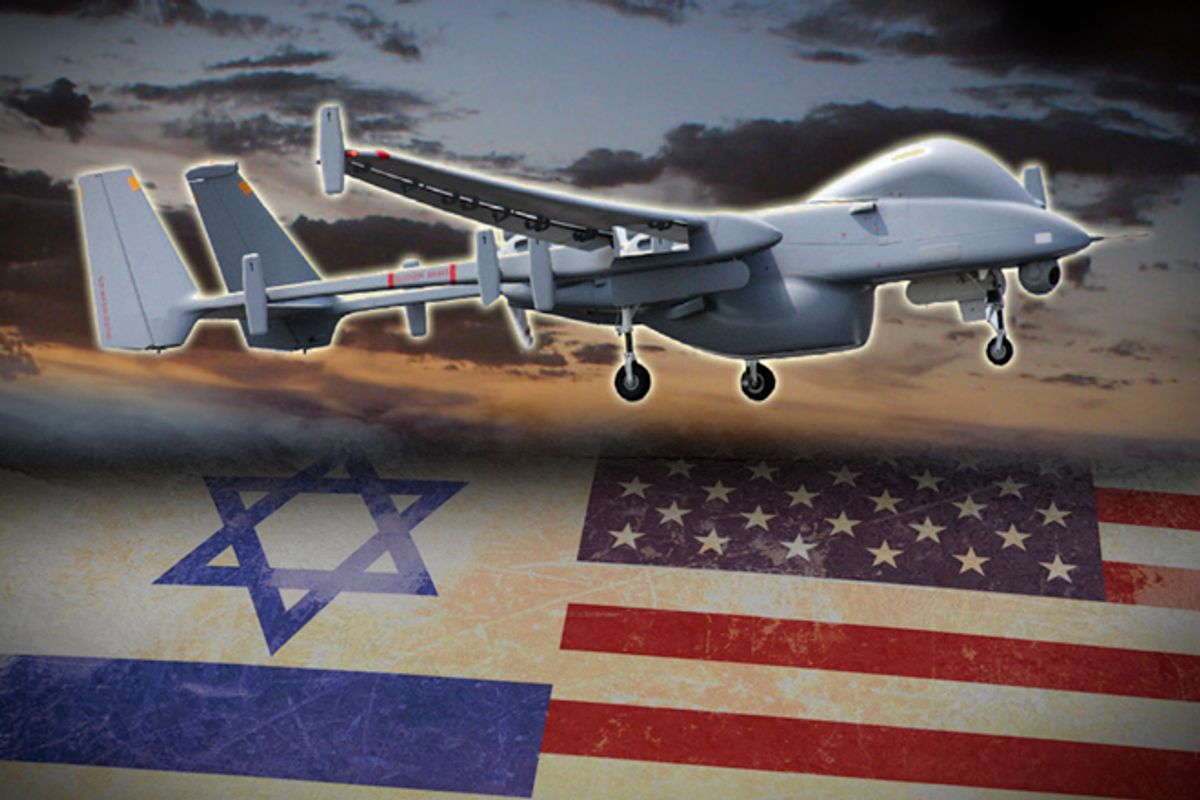 Stark Aerospace of Mississippi is perhaps the only foreign-owned company with FAA permission to fly a drone in U.S. airspace. Based in the town of Columbus, not far from Mississippi State University, Stark is a subsidiary of the state-owned Israel Aerospace Industries -- not that you could tell from looking at the company's website, executive leadership or affiliations. You have to go to the Mississippi secretary of state website to learn that two of Stark's three directors are Israelis.

So too with the America's drone industry. The Israeli influence is not visible but it is real, documented and extremely relevant to the future of drones in America. If you want to know how drones may change American airspace in coming years, just look to Israel, where the unmanned aerial vehicle market is thriving and drones are considered a reliable instrument of "homeland security.”

"There are three explanations for Israel's success in becoming a world leader in development and production of UAVs," a top Israeli official explained to the Jerusalem Post last year. "We have unbelievable people and innovation, combat experience that helps us understand what we need and immediate operational use since we are always in a conflict which allows us to perfect our systems."

Israel's drone expertise goes back to at least 1970, according to the UAV page of the Israeli Air Force. Mark Daly, an expert on unmanned aircraft at Jane's Defense in London, notes the Israelis were the first to make widespread use of drones in Israel's 1982 invasion of Lebanon, when the aircraft were used to monitor troop movements.

Now, as the Arab media and Western reporters such as Scott Wilson of the Washington Post have reported, the Israeli Defense Force uses fleets of constantly hovering drones to intimidate and control the Arab population in the Gaza Strip.  (The residents call these drones "zenana," which both sounds like the aircraft's distinctive buzz and is Arabic slang for a nagging wife.) The IDF regularly uses drones for targeted assassinations of suspected militants, saying the drones enable them to use "precision strikes" to avoid hurting civilians. Yet as Human Rights Watch has documented, the drone strikes during the Gaza War killed scores of children who were nowhere near armed combatants.

Israel markets its expertise in defense to the rest of the world. Israeli academic Neve Gordon cites a glossy government brochure on drones titled "Israel Homeland Security: Opportunities for Industrial Cooperation," which boasts, “no other advanced technology country has such a large proportion of citizens with real time experience in the army, security and police forces." The chapter called “Learning from Israel’s Experience” notes that "many of these professionals continue to work as international consultants and experts after leaving the Israel Defense Forces, police or other defense and security organizations."

The work has paid off when it comes to drones: The Jewish state is the single largest exporter of drones in the world, responsible for 41 percent of all UAVs exported between 2001 and 2011, according to a database compiled by the Stockholm International Peace Research Institute. Israeli companies export drone technology to at least 24 countries, including the United States.

In addition to exports, Israeli companies also create subsidiaries in consumer countries. "To increase sales outside Israel, Israel's defense companies have to set up subsidiaries in target markets, rather than expand local manufacturing," Haaretz reported  in 2009. The Israelis "set up Stark in 2006 to drum up business in America," according to Haaretz, because the U.S. prefers "to buy armaments and other defense gear from local companies." In 2007, Stark  "inaugurated its first production outfit, which makes Hunter unmanned vehicles that it sells through Northrop Grumman. In fact, the U.S. armed forces have been using [Israeli-made] Hunter drones since the early 1990s."

As for domestic drone uses, the Israeli example is perhaps most instructive at the U.S. border. The 5 million Palestinian Arabs living in and around Israel, like the 11 undocumented resident aliens in the United States, are ineligible for citizenship in the land they call home. Both groups are subject to monitoring, barriers to entry and rapid expulsion. Not surprisingly one of the first uses of drones by the Department of Homeland Security was to monitor the U.S.-Mexico border, where it now flies Israeli-made Hermes 450 drones.

And the Israeli example is instructive not just at the border, but also south of it, where the Mexican government has allowed the U.S. to fly drone missions as part of the drug war. Mexico has, apparently, learned a thing or two from its northern neighbor about the best country for buying drones. In March, when it allegedly purchased two new drones of its own, it knew where to go: Israel.