Where the wounded are

Wars don't just cause casualties among soldiers, they drain medical staff. I traveled to see the costs firsthand 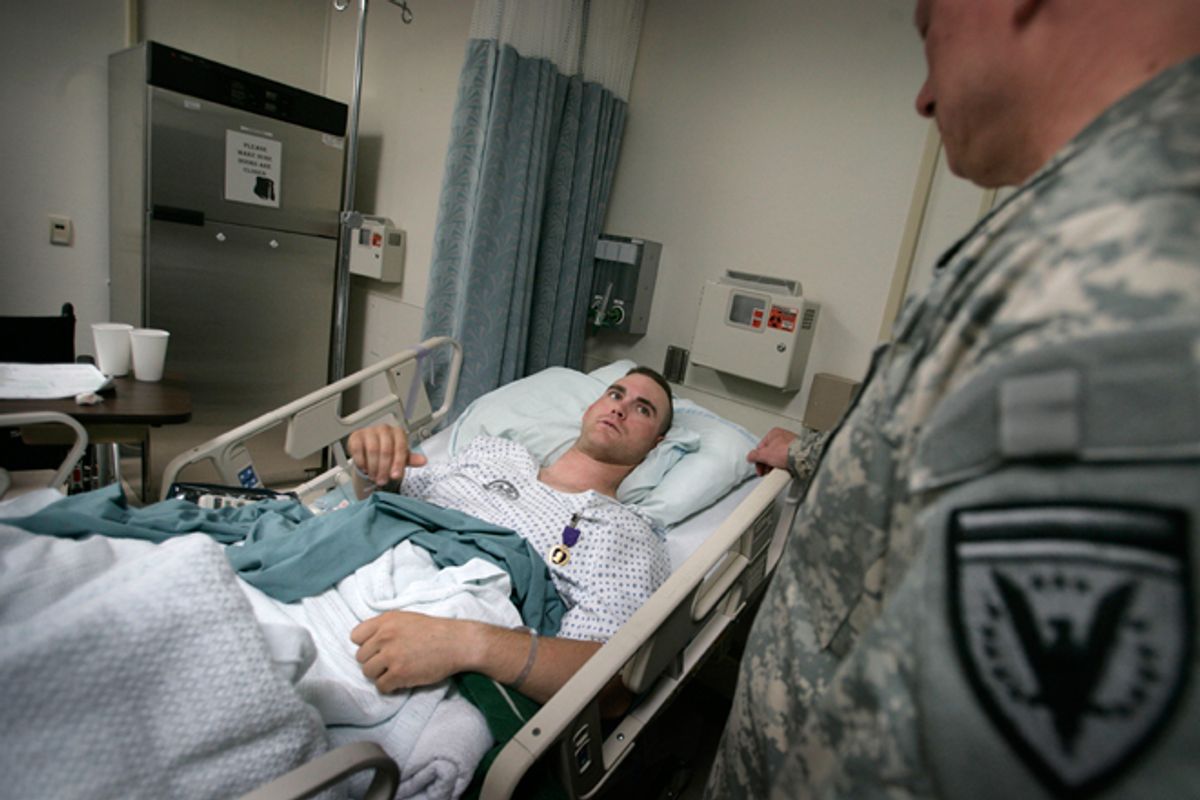 A soldier is prepared for an operation at Landstuhl Regional Medical Center. (Reuters/Kai Pfaffenbach)
--

The weather’s getting warmer in Afghanistan and the war there is heating up again. That means – as it has meant every year for more than a decade -- that the pace will quicken at the Landstuhl Regional Medical Center in Germany. More casualties will be brought to this largest American military hospital outside the United States. The Critical Care Air Transport teams and their C-17 Globemasters will fly in from “downrange,” as they call the Afghan battleground, and the injured will be brought by ambulance bus from nearby Ramstein Air Force Base to the hospital front door.

For the last four years, the foundation has been conducting writing workshops. The project began with professional writers from stage, TV and movies mentoring veterans from the Iraq and Afghan wars, working with them on writing exercises and projects ranging from memoirs and blogs to children’s books, screenplays and sci-fi novels. Recently, in collaboration with the Wounded Warrior Project, the foundation started similar workshops with caregivers, the loved ones of veterans helping them through the aftermath of catastrophic injuries.

Now, Wounded Warrior had asked some of us to come to Landstuhl to meet with the medical staff there. Some 3,000 strong, military and civilian, they work ceaselessly in what has become one of the busiest trauma centers in the world, helping between 20,000 and 30,000 patients a year (not just from the battlefield, but also military and their dependents from all over Europe, Africa and much of Asia).

Landstuhl is where the victims of the 1983 bombing of the U.S. Marines Corps barracks in Beirut were brought; Bosnian refugees from the Sarajevo marketplace bombing in 1994, too, wounded from the American embassy bombing in Kenya in 1998 and the 2000 attack on USS Cole. During the first Gulf War, more than 4,000 service members were treated at Landstuhl, as have been men and women fighting in the Balkans and Somalia. Since 9/11, the hospital has treated coalition troops from 44 different countries.

They compare this hospital to the center of an hourglass; it’s the midpoint between a combat injury and treatment in the field and then subsequent care back in the States or other home country. Or it’s where a service member is treated and then sent back into battle.

The staff at Landstuhl sees the wounded at their worst. Many who arrive suffer from multiple injuries – “polytrauma” so extensive that several teams of surgeons with different specialties – neurological, thoracic, ear and eye, facial reconstruction and orthopedic, among others -- may work on an individual patient, often simultaneously. Bodies are blown apart or crushed by IEDs, grenades and suicide bombs, but so skillful are the medical teams there, so advanced the techniques and technology, Landstuhl’s survival rate runs as high as 99.5 percent. (The survival rate among American wounded in World War II was 70 percent.)

But all that success takes a toll. One of the little discussed but potent side effects of war is what’s called combat and occupational stress Rreaction or secondary traumatic stress disorder. Compassion fatigue.

After all the years of fighting in Iraq and Afghanistan, many of the doctors, nurses and other staff at Landstuhl are exhausted or worse. Given what they’ve seen -- the horrific wounds and amputations, the infection, agony and grief – some walk around “like zombies,” one therapist said. Feelings of empathy and kindness yield to loneliness, despair and burnout.

Working with physically damaged men and women who are so deeply traumatized rubs off. The emotional rawness is contagious. A hospital handout on PTSD understatedly reads, “When life-changing events occur, perceptions about the world may change. For example, before soldiers experience combat trauma, they may think the world is safe. Following combat, a soldier’s perceptions may change -- a majority of the world may now seem unsafe.”

That’s why returning vets may reflexively search alongside a U.S. interstate highway for roadside bombs, only shop at Walmart at 3 in the morning, or worry to excess that their children’s school will be attacked by terrorists. And it’s why after hearing the stories of their patients, reliving the horrors of war, watching them endure pain and sometimes countless operations, medical practitioners can suffer from the same fears -- whether it’s the surgeon who heals the wounds, the psychiatrist who probes the mind for the source of anguish or even the clean-up staff decontaminating and removing the blood from surgical tools.

Combine that with homesickness, the high operational tempo of Landstuhl, the low tolerance for mistakes, the downtime when the mind takes over and remembers every awful experience. It’s a dangerous, often unhealthy mix.

And so, on a Saturday morning, we writers sat down with a bunch of men and women who work at Landstuhl and other nearby medical facilities. There were 14 of us and t32 or so of them. We broke into small groups – two writers working with a group of two to four hospital staff.

My colleague Susanna and I mentored four – a male Army nurse and a female Navy nurse, a physical therapist and a developmental pediatric psychiatrist. We weren’t there to interview or pry; they would tell us what they wanted us to know when they wished, their stories slowly emerging from conversation and the brief writing exercises we gave them.

The male nurse had been in Special Ops, the Navy, Marines and Army; he was reluctant to talk of what he had experienced but wanted to examine themes of good and evil in an epic novel. The physical therapist told us she wanted to explore the mind-body connection, perhaps with a blog; the Navy nurse spoke of her feelings for the soldiers she took care of from the Republic of Georgia, the former Soviet state, now independent. (By the end of the year, Georgia, aiming at membership in NATO, will have some 1,500 troops in Afghanistan.) She had learned how to bake for them the Georgian national dish, khachapuri, a cheese-filled bread; now she wants to write a cookbook.

For two days, we talked and they wrote, we recommended books and movies, they told us about the ones they loved. Tears were shed as stories and memories came to the surface, many too private to relate here. Over the coming weeks and months, we’ll stay in touch via email and meet again; trying to be of assistance as they write to express their thoughts and feelings, to tell their stories.

Do the workshops help? Hard to measure, but intuitively it feels as if they do, that in the talking and writing comes self-awareness and some measure of equanimity. And selfishly, for those of us who serve as writer-mentors, the benefits are enormous and fulfilling.

But the statistics are alarming. According to NBC News, “The Pentagon counts more than 6,300 American dead and 33,000 wounded in action in Iraq and Afghanistan. A Rand Corp study estimates that as many as 300,000 post-9/11 veterans suffer from PTSD or major depression, and about 320,000 may have experienced traumatic brain injuries, mainly from bombs.” The number of civilian fatalities in Iraq and Afghanistan remains uncertain but a Brown University study last year reported at least 132,000.

Meanwhile, there are still nearly 90,000 American troops in Afghanistan.  More will die and be wounded. President Obama has pledged their complete departure in 2014.

But even after that, the work at Landstuhl will go on. There are still nearly 300,000 American military personnel overseas, plus family members. Landstuhl will take care of many of them. And, says one of the hospital’s surgeons, with a sigh of resignation, “There will always be the Middle East.”