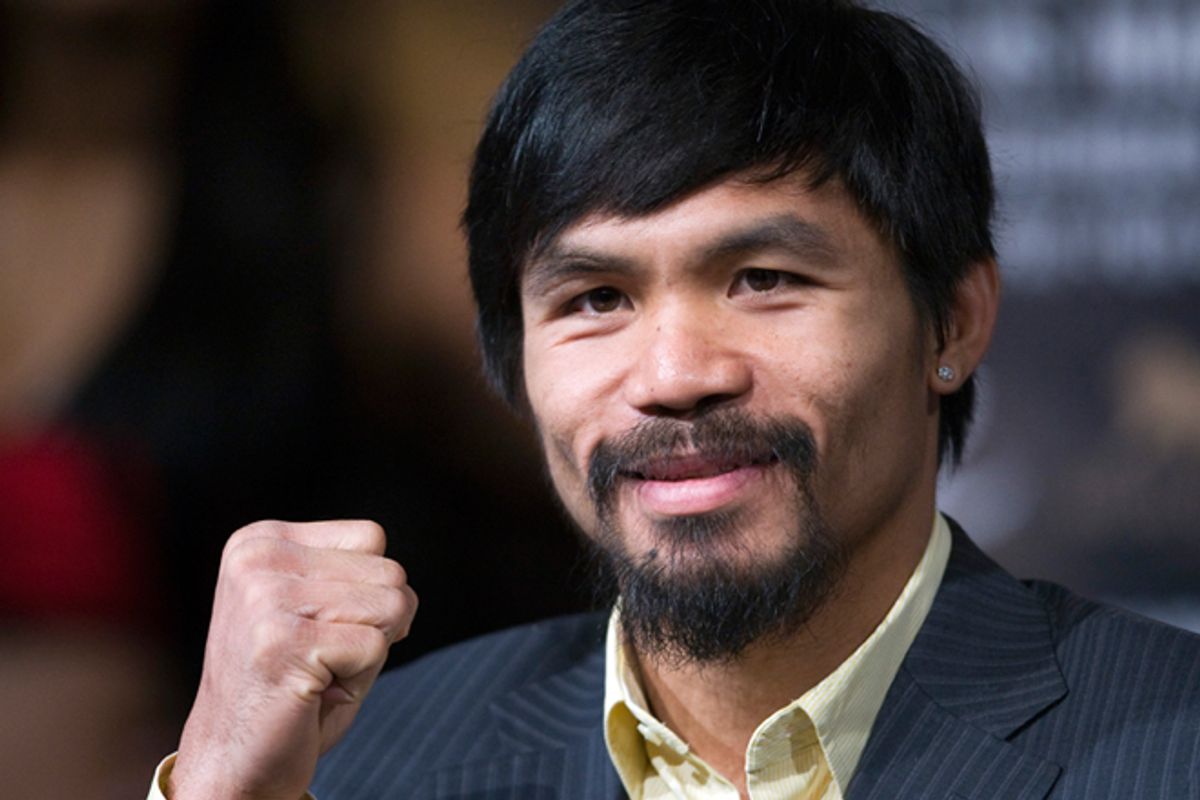 Let's get something straight, so to speak, right off the bat. There's no disputing that Manny Pacquiao is not the most enlightened guy to ever put on gloves and fight for a belt. In a story for Examiner.com this past weekend, blogger Granville Ampong wrote of how the boxing champ takes issue with Barack Obama's recent groundbreaking declaration of support for same-sex unions. "God's words first ... obey God's law first before considering the laws of man," Pacquiao told Ampong, in what the writer described as "an exclusive interview." Pacquiao was further quoted explaining that "God only expects man and woman to be together and to be legally married, only if they so are in love with each other… It should not be of the same sex so as to adulterate the altar of matrimony, like in the days of Sodom and Gomorrah of Old."

OK, it's generally accepted that invoking Sodom and Gomorrah in general -- and Sodom and Gomorrah of Old, in particular -- is not going to win anybody a seat at the GLAAD awards. Sure enough, Pacquiao's statements quickly set off a chain of angry and just plain disappointed responses from across the Net, where Pacquiao has been celebrated as a Filipino icon, and beloved for his humanitarian works. On Tuesday evening, the Los Angeles shopping center the Grove, where Pacquiao was to be interviewed for "Extra," called off the event. "Based on news reports of statements made by Mr. Pacquiao," read a statement from the center's spokesman Bill Reich, "we have made it be known that he is not welcome at the Grove and will not be interviewed here now or in the future. The Grove is a gathering place for all Angelenos and not a place for intolerance."

It's a relatively free country, which means that the Catholic Pacquiao is welcome to express his views, even views many of us find backward and exclusionary. In return, a business like a shopping mall may choose to decline his patronage. What is not OK is what happened along the way.

You see, within the original Examiner.com piece, Ampong went off on a bit of biblical tangent. "Pacquiao's directive for Obama calls societies to fear God and not to promote sin, inclusive of same-sex marriage and cohabitation," he wrote, "notwithstanding what Leviticus 20:13 has been pointing all along: 'If a man lies with a man as one lies with a woman, both of them have done what is detestable. They must be put to death; their blood will be on their own heads.'"

That's Ampong. Quoting Leviticus. You could go ahead and infer that this is what Pacquiao was alluding to in his remarks, and you definitely could say that's some convoluted writing there. But Pacquiao himself clearly didn't issue the quote. But let's not let the barest understanding of attribution get in the way of a sensational headline, shall we? Before you could say gross perversion of the facts, Change.org was running a petition asking Nike to drop "homophobic boxer Manny Pacquiao," declaring, "In an interview published Tuesday, March 15th with the conservative Examiner newspaper, the world-famous boxer and Los Angeles resident quoted Leviticus…" And except for the fact that Pacquiao didn't quote Leviticus, Examiner.com is not a conservative newspaper, and the interview didn't run on Tuesday, sure.

The confusion stems largely from a Tuesday L.A. Weekly blog post by Simone Wilson, in which she wrote, "Pacquiao told the National Conservative Examiner over the weekend that gay men should be 'put to death' for their sexual crimes." She then backpedaled a tad by noting "Yes, he was quoting Leviticus 20:13, but he hasn't backed down from his harsh stance." She continued further in the piece to invoke "what Pacquiao said" and ponder that "For the sports star to announce that he thinks thousands of gay Angelenos should be 'put to death' for loving a same-sex partner should hugely alienate him to the locals," adding that "Because ... uh ... 'put to death'? You just don't say that kind of thing in 21st century America." Maybe that's why he didn't. And by the way, calling the source "the National Conservative Examiner" greatly glorifies Examiner.com, a site anybody with an Internet connection and rudimentary typing ability can write for, "even if you’re not a professional writer." It's a site with all the journalistic credibility of, oh, L.A. Weekly.

But what kind of commitment to facts could we have expected from Simone Wilson? This is the person who, when real journalist Lara Logan was attacked in Egypt last year, hastily banged out a grotesquely offensive fantasy version of events, writing, "In a rush of frenzied excitement, some Egyptian protestors apparently consummated their newfound independence by sexually assaulting the blonde reporter."

Wilson's colleague Dennis Romero added more fuel to the mythic Pacquiao interview story Tuesday, in a piece headlined "Manny Pacquiao Says Gay Men Should Be 'Put to Death.'" USA Today then jumped in, reporting that "Pacquiao also invoked Old Testament, and recited Leviticus 20:13, saying: "If a man lies with a man as one lies with a woman." And the Village Voice blog, for good measure, reported, "The Bible Via-Manny Pacquiao: Gays Shouldn't Get Married, They Should Be 'Put To Death.'" How ridiculous did the whole thing get? On Pacquiao's own "official" website Tuesday, writer Keith Terceira said, "Manny Pacquiao was recently quoted in the USAToday as invoking the old testament." [sic]

I get that nobody really pays attention to what anybody posts on Examiner.com, but seriously. If you're going to quote someone, read the damn source material already. You need to have an eighth-grade reading proficiency level to get a driver's license, yet apparently you can be functionally illiterate and work for L.A. Weekly and USA Today.

On Wednesday, Granville Ampong wrote a follow-up post on the matter, saying of the Leviticus quote, "Pacquiao never said nor recited, nor invoked and nor did he ever refer to such context." And Pacquiao likewise issued a statement, saying, "I didn’t say that, that’s a lie… I didn’t know that quote from Leviticus because I haven’t read the Book of Leviticus yet," and adding, "I'm not against gay people … I have a relative who is also gay. We can’t help it if they were born that way. What I’m critical off are actions that violate the word of God. I only gave out my opinion that same-sex marriage is against the law of God."

Pacquiao inarguably has a long way to go in the tolerance department. And his remarks were ignorant, to be sure. But you can't cure ignorant with stupid. And you can't change minds with lies.

UPDATE: LA Weekly writer Simone Wilson called us Wednesday to clarify our assertion that she initiated the story that Pacquiao himself deployed the Leviticus quote, telling us that "USA Today, the Village Voice, and his own Web site had already reported it" by the time she wrote her piece. Though the misleading content of her story remains the same, her place in the fray was not first. For which we apologize -- and offer the sincere hope that the story can't get any more meta now.