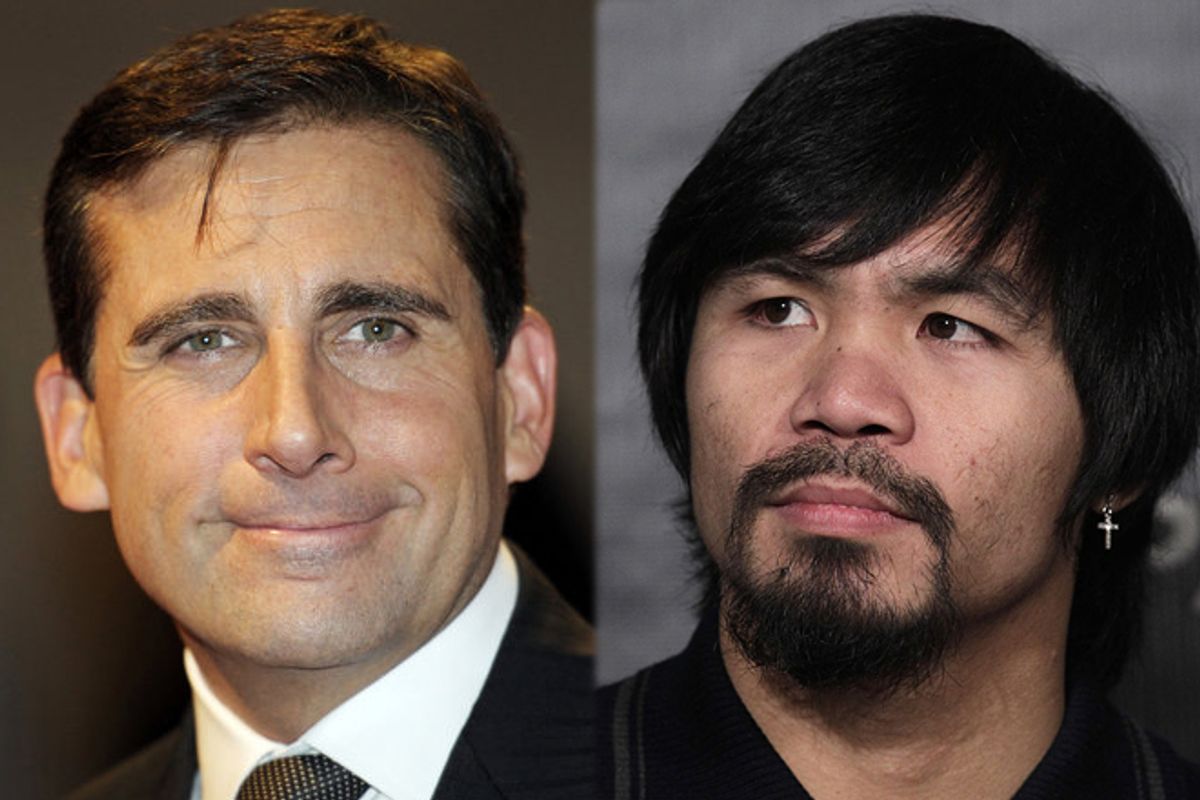 We're all relieved around here that Manny Pacquiao is not really some Leviticus-quoting loon who says that gays "must be put to death" – even if that may have something to do with the fact that he admits "I haven't read the Book of Leviticus yet."

But it's nonetheless disappointing that a man we at Salon bestowed our highest honor to just six months ago has proven himself so terribly unenlightened. In an interview for Examiner.com last week, one of our 2011 Sexiest Men declared of marriage, "It should not be of the same sex so as to adulterate the altar of matrimony, like in the days of Sodom and Gomorrah of Old." Oh dear. Winning lots of fights? Sexy. Getting elected to the Filipino Congress? Sexy. "Donating millions to improve living conditions in his poverty-stricken nation"? Super hot. Not being down with civil rights? Bzzzzzzt!

That is why we have decided to take an unprecedented step here at Sexiest Men World Headquarters. We have in the past fought epic, bloody internal battles over men like Zach Galifianakis, Al Franken and Louis C.K. But we have never, in our sexy, sexy history, revoked a man's title. Until now.

We understand that the Roman Catholic boxer has to be true to his beliefs, and we would never insist that falling in lock step with Salon's own socialist, American fabric-destroying agenda is the only criterion for making the list. It's just that we suddenly don't feel like going a few sweaty rounds with a dude who thinks civil rights "adulterate the altar of matrimony."

So instead we're passing on the crown to one of last year's runner-ups. Like Pacquiao -- and also like our beloved first Sexiest Man, Carell's former "Daily Show" colleague Stephen Colbert – he's a happily married, self-described "born and bred" Catholic. But this one says, "I stay clear of declaring my political choices," insisting humbly, "I feel like my voice is no more valuable, no less valuable than anyone else's."

What really makes us go weak in the knees is how he turned a bumbling, inept bag-of-wind character and made us care when he said goodbye to "The Office." And, last summer, he took a broken, pathetic, recently divorced dad and made him so tenderly romantic (and so darn good-looking in a tailored suit) he nearly made us forget Ryan Gosling in "Crazy, Stupid Love." We've had a thing for him since before he became a 40-year-old virgin. We'd choose him as our friend for the end of the world. How could we ever have been so blinded by that pugilistic piece of beefcake? That's why today, we're asking newest Salon Sexy Man Steve Carell, will you gay marry us?