Attention, Hulu and Netflix: It's not TV, it's the Internet. Original programming needs to take more chances 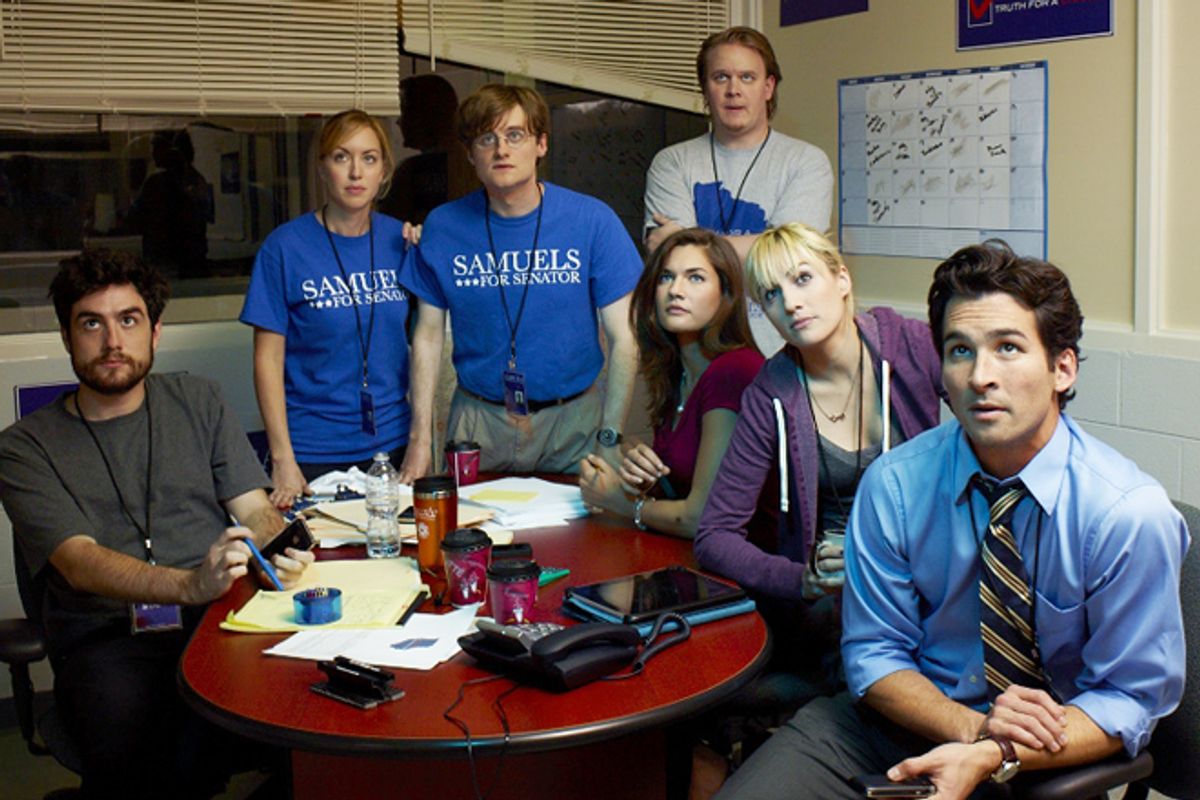 A still from "Battleground"
--

At the Fox Upfront on Monday afternoon, the head of programming “welcomed” Hulu and Netflix to the original programming game, with all the threatening good cheer of an amped-up high school senior getting ready to pound on an incoming freshman’s face. Sure, the more good original programming the better, Fox suggested, but making hit TV is hard and developing an audience is even harder -- these online upstarts should expect to get demolished by their network rivals for a long time to come. Or as the head of programming put it, “Welcome to the NFL.”

But just mentioning Netflix and Hulu, two companies that have thus far rolled out exactly one original scripted program each to not much fanfare, is a compliment of the “It's better to be talked about than not talked about at all” variety. Hulu and especially Netflix, which will begin airing new episodes of Fox’s former show “Arrested Development” sometime later this year, are on the playing field. Since one of the major distinctions between Hulu and Netflix and broadcast TV is that there’s no proper time to watch their shows, now seemed as good as any to catch up on the two existing series and see if Fox and its brethren have anything to worry about.

Hulu’s “Battleground” is a 13-episode comedy set behind the scenes of a Wisconsin Senate campaign and executed in the mockumentry style of “The Office.” Neflix’s seven-episode “Lilyhammer” is a comedic drama starring “The Sopranos'” Steven Van Zandt as a wise guy who ends up in Norway. Both series are professional, solid and unembarrassing. And even though I stayed up way past my bedtime one night finishing the enjoyable “Battleground,” both it and “Lilyhammer” are the TV equivalent of cautious toe-dipping, Netflix and Hulu’s proof that they can make polished products audiences will recognize as television.

“Battleground” is a well-constructed, low-key series that’s about 75 percent as good as something great. The dialogue is smart, the approach to politics is pleasantly non-histrionic, the characters are likable and so is the candidate. If the broad, idiotic Jordan — the son of the candidate’s husband — feels like a Dwight Schrute knockoff, the rest of the series counterbalances with an assiduous streak of Midwesternness, unshowily getting down to the business at hand, which happens to be putting together a competent, amusing television program. (One of the main characters, a nerdy, nice, newbie staffer who gets the girl by staying nerdy and nice, is a personality type that could only exist in the Illinois-Wisconsin-Minnesota tri-state area. More like him, please.) If you’ve run through episodes of “Veep” and “The West Wing” and “Tanner 88” and you still have an itch to scratch, “Battleground” will do it.

Netflix’s  “Lilyhammer” is not nearly as charming. Van Zandt plays a mobster who requests witness protection in Lilyhammer, because he liked the look of it in the 1992 Olympics. Once in Norway, a country full of snow and reindeer sweaters, electric cars and polite police chiefs, he figures out how to put his gangster skills to use in a new environment. In the first episode, a lone wolf — and that’s not a metaphor for a loner, but an actual sheep-eating wolf — gets a pair of cement shoes. The show feels like a really long indie movie that somehow got distribution, OK reviews and no audience, and now kicks around on your suggested Netflix streams for eternity.

But if the short, funny “Battleground” is both better and better suited to a computer screen than the longer, less funny “Lilyhammer,” Netflix’s strategy still makes more sense than Hulu’s. The great hurdle for both Netflix and Hulu is inserting their series into the conversation. There has to be a subset of people who feel about political comedies or displaced mobsters the way I do about British costume dramas — which is to say that they hunt down programs fitting this description, and watch the hell out of them — but that’s not most people. With thousands of TV shows available to audiences through legal means, and almost all the TV shows ever available through illegal ones, a brand-new series that’s not half bad isn't going to jump to the top of anyone’s Netflix queue if people aren't talking about it.

“Lilyhammer” isn’t great, but it is nominally ambitious (it is, in fact, another one of The Fauxpranos), and ambitious TV is the kind that gets people chatting and binge watching. Netflix’s next shows — "Arrested Development" and the David Fincher-Kevin Spacey collaboration “House of Cards" — should get lots of attention, and be a lot better than "Lilyhammer." Meanwhile, Hulu’s model, to make something solid and small and premiere an episode of it every week, seems totally reasonable and not nearly flashy enough to get its shows to stand out in a very, very crowded field.

There is another way for Hulu to go, and it doesn’t involve spending heaps and heaps of money on famous people and canceled but beloved TV shows. And that’s to make something strange.  “Battleground” and “Lilyhammer” and all the shows that Hulu and Netflix have in the works are exceedingly normal, shows that would fit any TV executive’s idea of what a TV show should be. This seems sensible, as well as small-minded and skittish. Netflix and Hulu aren’t TV networks,  and they should revel in that. (It is not, if you hadn't heard, such a good time to be a TV network.) Why aren’t they putting on the crazier, weirder shows, cheaper series with odd perspectives and strange time stamps, that are good enough to get people talking and that no network, or even cable channel, could ever put on? Hulu and Netflix want respect, when all they need is buzz, even the buzz of a small, dedicated audience. Netflix and Hulu aren't just TV, they're the Internet. They should stop being so boring.