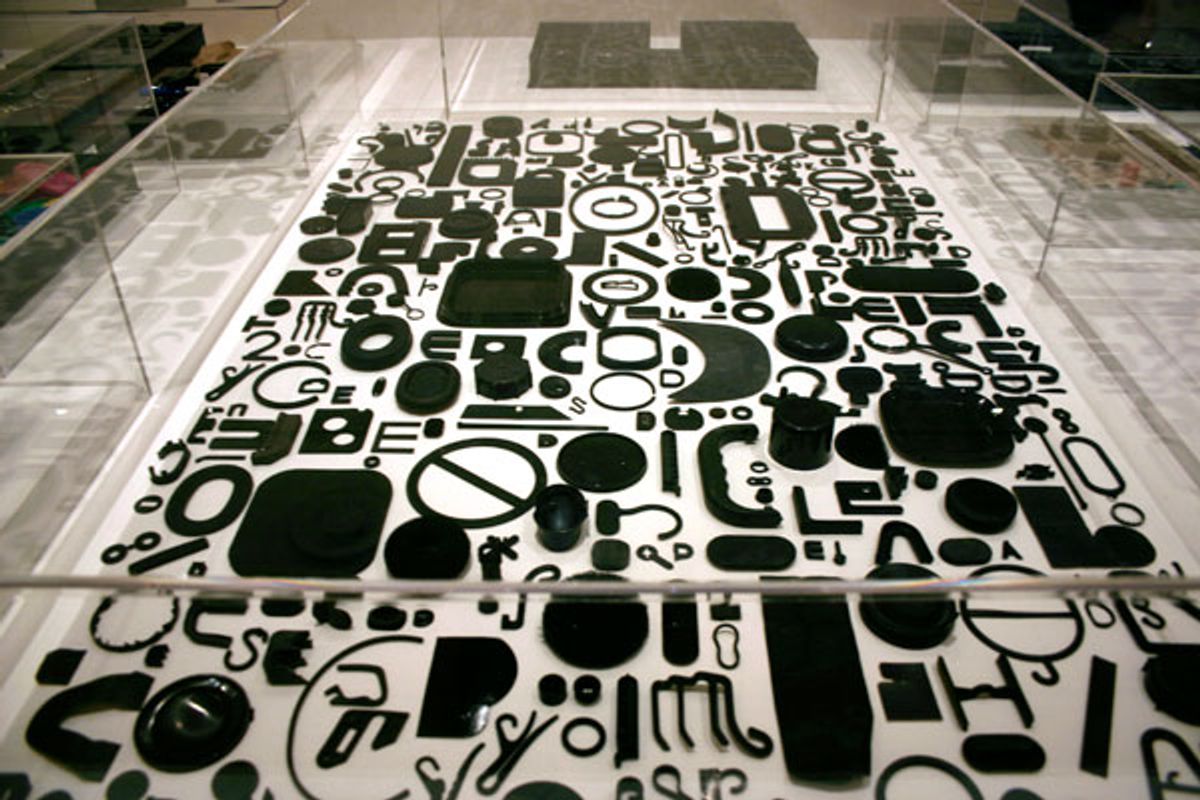 In the exhibition "Ecstatic Alphabets/Heaps of Language," which opened on Sunday at the Museum of Modern Art, words are treated as tools and as totems. Gathering text-based work by artists from Marcel Duchamp to Tauba Auerbach alongside contemporary designers like Paul Elliman and Dexter Sinister, the show offers varied takes on how to make meaning out of language, and also how to make a beautiful mess of it—sometimes at the same time.

The typographic theme runs through work by pillars of midcentury art (Lawrence Weiner, Robert Smithson) and contemporary design upstarts (like Experimental Jetset and Stuart Bailey and David Reinfurt, who collaborate as Dexter Sinister and produced the exhibition catalog—$5 in the MoMA gift shop and downloadable for free—as an issue of their magazine, Bulletins of the Serving Library). There’s also a bright thread of humor. Pick up one of three black telephones sitting on a shelf, and you’ll suddenly be on the line with Frank O’Hara or John Giorno or Robert Creeley, who generously recite a poem just for you (or in Allen Ginsberg’s case, chant incoherently in your ear).

Auerbach has some cheeky little ditties on display, including The Whole Alphabet (lowercase), a single piece of paper with all 26 letters typed one on top of the other in a formalist blur. Her other works are literal-minded jokes that use the expected physical form of the book as their punchlines: a 3,200-page RGB color test, for instance.

But the conceptual heart of the show, and the highlight, is Found Fount, by the London-based designer Paul Elliman. Elliman has long been experimenting with deconstructions of language and objects—creating alphabets from photobooth portraits, for example. Whereas some artists in the show disassemble language into its physical forms or turn it into sculptures drained of immediate linguistic meanings, Elliman conjures words from ordinary objects. "Dead Scissors," for example, collects broken-off scissor handles that look like the letter P.

Although Elliman has been gathering the pieces of Found Fount for 23 years, this is the first time the physical forms have been publicly on display. The show collects just a small sampling of the work, which still takes up a vast vitrine: cracked pieces of plastic, rusted metal U-rings, rhinestone-encrusted broaches, plastic beads, and cardboard cast-offs. The cardboard, mind you, has been not purposefully cut out into letterforms. Rather, they’re the random bits that are sometimes glued into folded boxes—the corners, wedges, and other pieces normally destined for the recycling bin. Here, however, they're lovingly arranged and displayed on a black background under Plexiglas alongside Elliman's other everyday wonders.

"Ecstatic Alphabets/Heaps of Language" runs through August 27. Paul Elliman will discuss his work on Wednesday, May 9, at 6 p.m.