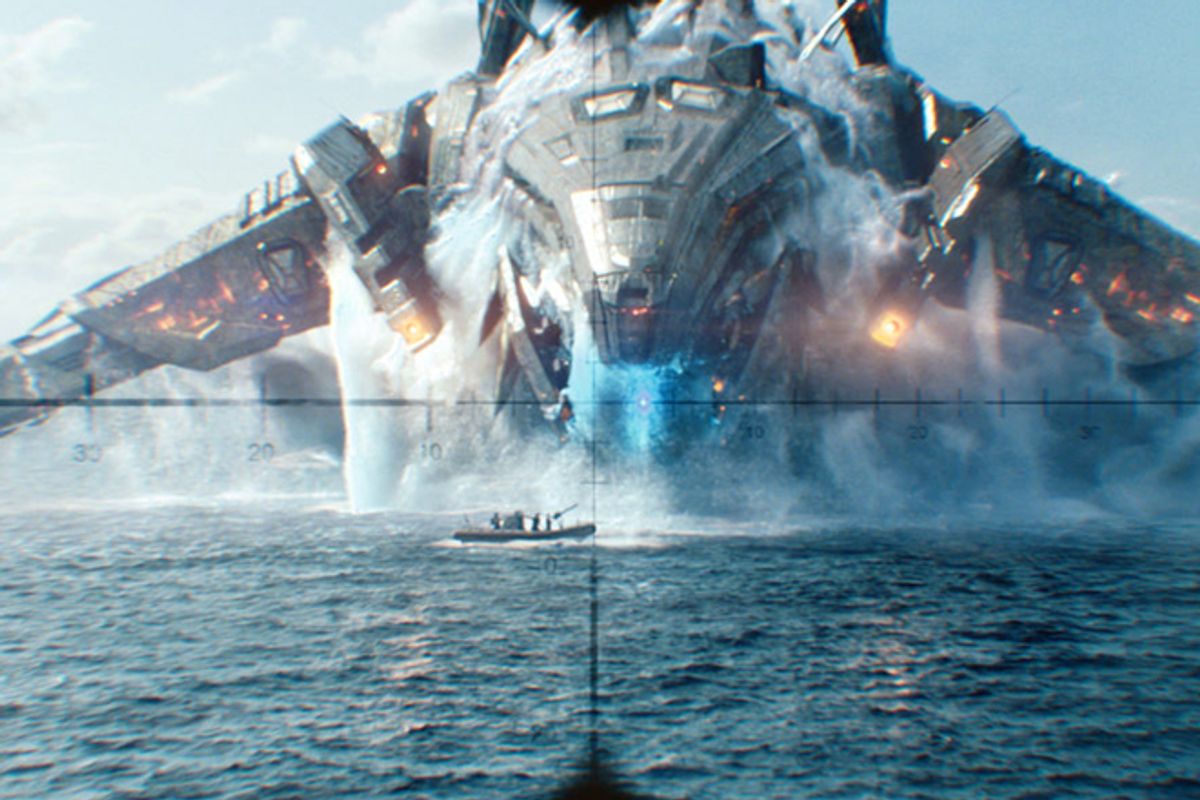 A still from "Battleship"
--

One of the great marketing constants of contemporary Hollywood is the idea of appealing to the 11-year-old boy within every moviegoer (whatever gender that person may manifest on the surface). Almost every American movie released during the summer season has that squirmy pre-adolescent id in view, and about two-thirds of the movies made the rest of the year. But what about a movie as baffling and incoherent and flat-out stupid as "Battleship" -- an alien-invasion adventure by way of a Hasbro game, or maybe the other way round -- a movie that would make your inner 11-year-old stomp out of the theater in disgust?

It's undoubtedly gilding the lily to claim that "Battleship" is the dumbest movie I've ever seen -- for all that I front as someone who only likes Turkish films where people stare at the landscape without talking, I've seen a lot of dumb movies -- but it's definitely up there. Over and above its extraordinary, mind-melting level of stupidity, "Battleship" (which is directed by actor-turned-filmmaker Peter Berg, of "Hancock" and "Friday Night Lights," and written by action-flick brothers Erich and Jon Hoeber) is also extremely weird. Its shameless and nonsensical combination of ingredients finally won me over, after a fashion, when I realized that its gung-ho Navy-recruitment propaganda and retrograde gender politics shouldn't be taken any more seriously than the ZZ Top, AC/DC and Billy Squier songs on the soundtrack. The only point of the whole exercise is to make small boys whoop and holler.

You know that bar over on the roughneck side of town, the one where all the jingoistic, pro-military, America-hell-yeah movies go to quaff some brewskis and swap tales about kickin' Communist hiney? Yeah, that one. Well, when "Battleship" shows up there and starts breaking beer glasses on its head, "Top Gun" and "Red Dawn" and "The Green Berets" get to feel all grown-up and complicated and full of girly-man sensitivity. That's how stupid it is. Come to think of it, that's the same Oahu tavern where we first meet our handsome but headstrong hero, Alex Hopper (Taylor Kitsch, last seen fleeing the ruins of "John Carter"), who's enjoying a birthday beverage and stern lecture, both provided by his uptight Navy officer brother, Stone (Alexander Skarsgård). Let me back up and repeat that key piece of information: Skarsgård's character is named Stone Hopper, and I promise that if you remind me of that in three years, I'll still think it's hilarious.

That bar on that evening is also where Alex first claps eyes on Sam (Brooklyn Decker), a leggy, cheerleader-ish blonde who's come into this testosterone-rich dive bar unaccompanied, only to be denied a microwave burrito. Alex gets her that burrito, and wins her heart, at the end of a painful slapstick sequence that involves the total destruction of a convenience store and him being repeatedly Tased by local law enforcement. Funny! Shortly after that, we get to see Sam wearing short-shorts and a tank top, smooching with Alex on the beach -- and that's the one and only moment of faint implied sexuality anywhere in "Battleship." Decker's Sam might as well be encased in a glass vitrine; for the rest of the movie she's seen only in chaste white dresses or tomboyish outdoor clothes. She's less a Megan Fox-style sex object than a small boy's vague and non-threatening idea of a sexy lady, and in her remaining scenes with Alex she spends her time urging him -- I'm not kidding about this! -- to ask her father for her hand.

Alex doesn't get around to doing that right away, because after the seemingly endless throat-clearing of these early scenes, stuff finally starts happening and the action movie gets here at last. See, Alex has been dragged into the Navy by his big brother Stone Hopper and somehow gotten an officer's commission, and Sam's dad (Liam Neeson, doing his growly Amurkin act) is some big-shot admiral who hates him, and then some huge alien vessels from outer space show up, because of a beacon sent out there by geek scientists (thanks, nerds!), destroy Hong Kong and land in the Pacific right in the middle of RIMPAC, which sounds vaguely pornographic but is actually a massive naval exercise involving fleets from many nations. The alien ships are immense gleaming CGI monstrosities wielding impressive firepower -- as usual, far beyond our comprehension, etc. -- but they're also kind of the McMansions of the alien-invader world, meaning that they look great for the first few minutes and then you start wondering what the point is, and how well anybody thought any of this through before they started building.

There appear to be no clear rules governing the behavior of the marauding aliens, which is to say that the only rule is this: Despite their overwhelming military superiority, the invaders must have weaknesses that will eventually allow the United States Navy to boo-ya all over their asses. So the aliens never fire on anyone who doesn't pose a direct threat (except when they do), even though their apparent purpose is world conquest. They come from a planet that, as we are repeatedly told, is very similar to Earth, yet they have reptilian eyeballs and cannot tolerate direct sunlight. Their ships can apparently fly -- or, at least, they flew here across millions of miles of space -- yet they navigate through the ocean with a frog-hopping motion not unlike metallic whales doing the butterfly stroke. In fairness, all the big machines and humanoid monsters and things that go boom are awesomely rendered; Berg has definitely spent his reported $200 million budget on stuff you can see. It's just all so profoundly stupid.

Thanks to whatever marketing logic dictates that these kinds of summer movies have to last more than two hours, Berg and the screenwriters pack in all kinds of Navy protocol, ludicrous subplots and irrelevant comic business, among the explosions. R&B star Rihanna is here, in a nothing role as a tough-as-nails petty officer, and Tadanobu Asano, a major Japanese star whose presence may pay off in East Asia, plays a kind of guest-star captain who figures out how to track the radar-cloaked alien ships using a low-tech grid that somewhat resembles -- yes! -- the traditional layout of the Battleship game. I bet there were high-fives all around in the writing room when they figured that one out. (Let me observe here that playing the Hasbro version is lame; Battleship can and should be played with graph paper.)

I'm not even getting into the bizarre "Space Cowboys" twist toward the end, in which a mothballed World War II-era battleship, and its crew of geriatric docents, is dragged into the fray in a last-ditch effort to save the world. I mean, I know what the title of the movie is, but it's somehow especially funny that they got all worried about the fact that the real-life Navy doesn't use battleships anymore. ("Man, we can't let down the people like this! They want a freakin' battleship, and they're gonna get one!") Plus, did you know that museum ships built 70 years ago are kept all fueled up and ready to go, with stacks of live missile shells piled up behind the Grab-a-Smurf machine? Me neither! But please forgive me; I'm just bitter. Unlike Taylor Kitsch's endlessly enthusiastic character, I never did get around to asking my wife's dad for her hand in marriage. And when you get right down to it, isn't that kind of a charming custom? Why in the world did we let that one get away?