Right-wing writers, from Charles Krauthammer to Matt Drudge, join the left in criticizing domestic drone use 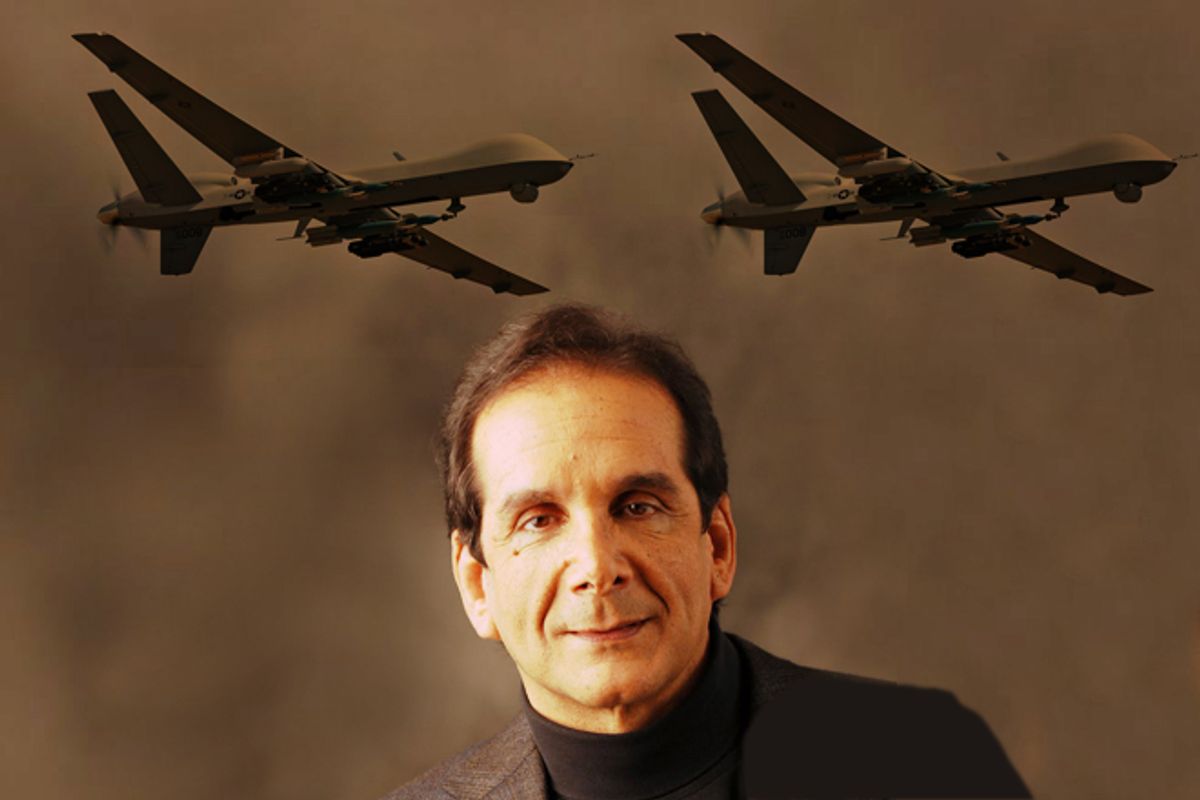 Opposition to the use of drones in domestic airspace is spreading from the Code Pink left to the Fox News right. While conservatives laud the use of drones against suspected militants overseas, the sudden and vehement criticism of domestic drones this week by three right-wing commentators suggests that Congress's rush to open up U.S. airspace to unmanned aviation vehicles now faces an unusual left-right chorus of critics.

Admitting that he was "going ACLU," conservative columnist Charles Krauthammer called Monday for a total ban on the use of drones in U.S. airspace. As reported by RealClearPolitics, Dr. K said:

A drone is a high-tech version of an old army and a musket. It ought to be used in Somalia to hunt bad guys but not in America. I don't want to see it hovering over anybody's home. Yes, you can say we have satellites, we've got Google Street View and London has a camera on every street corner but that's not an excuse to cave in on everything else and accept a society where you're always under -- being watched by the government. This is not what we want," Krauthammer said on the panel portion of FOX News' "Special Report."

In fact,Krauthammer has outdone the ACLU, which has invoked a "nightmare scenario" of drones without calling for an outright ban. Krauthammer even predicted that some Americans may try to shoot down a surveillance drone, while adding he did not want to encourage the idea.

On Tuesday, Fox News contributor Anthony Napolitano seconded Krauthammer's prediction, minus his scruples. "The first American patriot that shoots down one of these drones that comes too close to his children in his backyard will be an American hero," Napolitano said, much to the consternation of anti-vigilantes at Media Matters. Conservative impresario Matt Drudge also wondered about the legality of shooting down drones, tweeting Tuesday, "Question for The New Age: If one shoots down a fed/police drone while it's invading one's privacy, does that make one a terrorist?"

Later on Tuesday, CNN's resident conservative Jack Cafferty worried that, "as more and more of these unmanned aircraft pop up over U.S. soil, they may be used to spy on Americans."

There is an Air Force document that says if unmanned drones accidentally capture surveillance footage of Americans, they can keep the information for up to 90 days and analyze it. Where is that in the Constitution?

The U.S. military and the government aren't supposed to conduct surveillance of Americans on U.S. soil without their consent, but if they accidentally capture you on video, that's OK.

While political unity can be heartwarming, the differences between liberal and conservative critics are not negligible, reflecting very different cultural and ideological impulses. While conservatives fantasize about shooting down drones, liberals dream their moral arguments can control the skies. But it is striking that these conservative critics, while supporting the drone wars overseas, do not see security benefits at home. Like liberals, they see mostly an incipient civil liberties threat.

Whether a coalition of the libertarian left and libertarian right can influence U.S. domestic drone policy remains to be seen. A similar coalition has opposed the Patriot Act for a decade without visible effect.