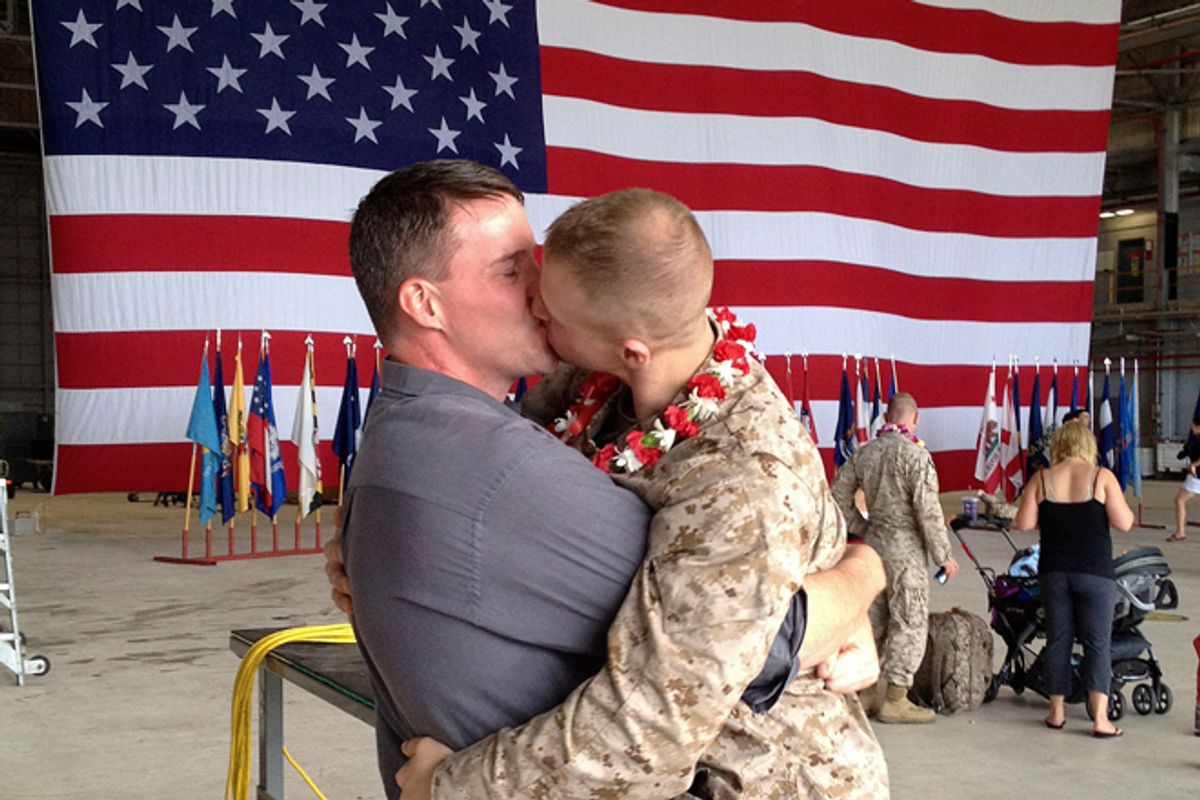 People who thought the repeal of “don’t ask, don’t tell” was the final word on discrimination against gay and lesbian soldiers were mistaken. As the House of Representatives debates the National Defense Authorization Act this week, Republicans will push for two amendments to permit the military to discriminate against gay and lesbian service members, using “religious freedom” as a cover.

One amendment, offered by Mississippi Republican Steven Palazzo, would prohibit the use of military property to “officiate, solemnize, or perform a marriage or marriage-like ceremony, involving anything other than the union of one man with one woman,” even on bases in states in which same-sex marriage is legal. Rep. Todd Akin’s, R-Mo., amendment would require the military to “accommodate the conscience and sincerely held moral principles and religious beliefs of the members of the Armed Forces concerning the appropriate and inappropriate expression of human sexuality” and would prohibit “adverse personnel actions” against them.

The amendments are another step in a campaign waged by congressional Republicans, religious right activists and their allies in a new organization, the Chaplain Alliance for Religious Liberty, to protect military chaplains who discriminate against gay and lesbian service members. This campaign — infused with overheated rhetoric about repression and persecution of Christians — has emerged as a key piece of the religious right's strategy of portraying the Obama administration and its allies as hostile to religion.

House Republicans have sought to portray anti-gay military chaplains as in need of protection to freely express their belief that homosexuality is a sin. Akin’s effort to protect the “conscience” rights of chaplains and religious service members “is trying to solve a problem that does not exist,” Aubrey Sarvis, executive director of the Servicemembers Legal Defense Network, which fought for DADT repeal, said in a statement. Sarvis added that there are already adequate protections for chaplains’ and other service members’ consciences, and no one is being punished for their personal religious beliefs. Palazzo’s amendment conflicts with Defense Department policy requiring neutral use of facilities, according to SDLN.

Last year, similar amendments in the House version of the NDAA were stripped out in conference committee. But House Republicans have persisted in their push for “religious freedom” against the rights of gay and lesbian service members to be free of discrimination, harassment and stigmatization. It’s a fight, in Akin’s words, against “[t]his liberal agenda” that “has infiltrated our military, where service members and chaplains are facing recrimination for their sincerely held moral and religious beliefs.” Akin claimed that raising “moral or religious concerns” about same sex marriage or the DADT repeal “have become potentially career-ending” for some chaplains and charged that Obama’s support for same-sex marriage “will only add fuel to this fire.”

President Obama’s new position on marriage equality, the anti-gay activists claim, is yet more evidence that the government seeks to repress their religious speech and practices and eventually drive them out of the military.

“In part this was triggered by repeal of 'don’t ask, don’t tell,'” said Ron Crews, a retired military chaplain and executive director of the Chaplain Alliance for Religious Liberty. But he, too, tied his group’s activism to the broader claim that Obama is hostile to religious freedom.

“There’s just concern right now about this administration’s seeming lack of understanding of religious liberty issues, and this is just one symptom of that,” Crews told me. He cited the administration’s contraception coverage policy as another example. Since senior Defense Department officials are political appointees, he added, the legislative efforts are an attempt to “counterbalance” administration policy.

The Chaplain Alliance is made up of retired chaplains who are now “endorsing agents” for active military chaplains serving as representatives of their religious group or denomination. The Alliance is entirely Christian and represents 2,500 active chaplains, said Crews.

The military, said Crews, “has become another laboratory for social engineering” as the DADT repeal “validated behavior in the military that a good number of faith groups acknowledge as sinful behavior and so the government has put its stamp of approval on behavior that faith groups find sinful and harmful, actually, to the individual and to the broader society.”

To advocates for the rights of non-theists and non-Christians to be free from evangelism in the military, though, the military chaplains’ complaints ring hollow. “Chaplains are senior officers with their commanders' ear, unfettered access to service members, and the right to preach their beliefs from the pulpit,” said Jason Torpy, president of the Military Association of Atheists and Freethinkers, which opposes the amendments and has worked to end discrimination against non-theists in the military. The MAAF has documented and advocated against aggressive evangelizing in the military, including command promotion of prayer, disparagement of non-believers, religious counseling and “spiritual fitness” programs (which promote Christianity as an essential part of military service), evangelical concerts and baptism of troops.

“These amendments are intended to give chaplains the additional power to force their beliefs on others by belittling and ridiculing fellow service members,” Torpy added. “When did the honorable concept of free exercise of religion give way to the free infliction of religion?”

“We think the language they have put forth would allow people the license to bully, and then blame it on their religion requires them to do this,” said Edwina Rogers, executive director of the Secular Coalition for America, which also opposes the amendments.

The Chaplain Alliance claims, however, that chaplains are the ones at risk of being bullied. In a letter to the House Armed Services Committee supporting a similar, stand-alone bill, the Military Religious Freedom Protection Act, the Chaplain Alliance ominously warned of a “hostility” to the chaplaincy that could cause them to lose their endorsements “because of their inability to preach, teach, or share with their fellow servants the full counsel of God,” leading to a “constitutional crisis” because “the military cannot function without the chaplaincy, much less a partial chaplaincy.”

But when I asked Crews about retaliation, he said, “we have not had any chaplains reprimanded as yet for anything they’ve said in the pulpit,” and admitted there are protections for chaplains speaking at a worship service. But, he added, “we’re not just concerned with what happens inside the walls of the chapel,” but with “the overall ministry of a chaplain.”

Crews pointed to the Strong Bonds program, which sponsors military retreats to help service members “strengthen” their marriages under the stress of multiple deployments. “The question becomes will chaplains be required to take same-sex soldiers on those retreats if the chaplain upholds the view of the definition of marriage from a biblical perspective that marriage is between one man and one woman. We’re just waiting right now for an incident to occur. This is one of the unknowns.”

Crews’ worry that chaplains will be forced, against their religious beliefs, to provide marriage counseling to same-sex couples underscores how the religious right has disregarded the Establishment Clause as it complains of religious persecution. Strong Bonds, which uses Christian materials, has long been a target of criticism from the Secular Coalition, the MAAF, and other advocates of church-state separation, for using federal money to lecture service members with sectarian religious advice.

Several years ago, Laurel Williams, an Army major who attended a Strong Bonds retreat in Orlando, Fla., in 2008, showed me an array of evangelistic materials she received there. One item was a book by Gary Chapman, described as the “leading biblical marriage counselor in the U.S.,” whose phrase “love your partner like Jesus loved the church was repeated over and over throughout the weekend seminar,” Williams told me. One book used in the program promised its readers that “you can be equipped to develop an affair with the one and only lover who can satisfy all your innermost desires: Jesus Christ.”

Torpy, of the military atheist group, obtained a copy of a strategy memorandum sent by an Akins aide to House staff and several religious right leaders, which shows Republicans decided to offer two separate amendments because it “gives us the strongest hand going into conference with the Senate.”

But Rogers said she had “high hopes” that the Senate would not adopt the amendments, even if they are passed by the House, and that they would once again be removed in conference. “To roll the clock back and say, now you can discriminate based on what you believe,” said Rogers, “sounds like a serious problem.” But discriminating based on their religion is exactly what the “religious freedom” crusaders want to achieve, and it doesn’t look like they’re going to give up any time soon.