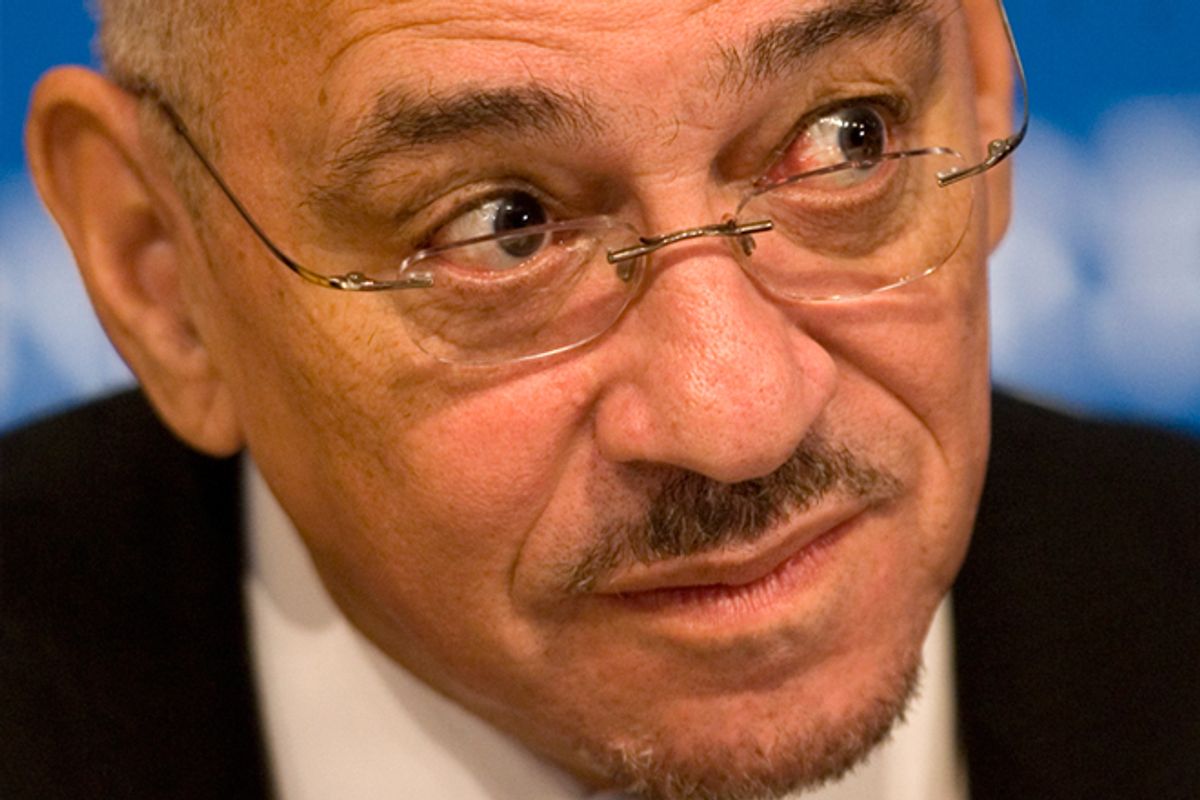 On the one hand, it's almost funny. Fred Davis, the man who created hilariously bad ads for losing 2010 Republicans -- Carly Fiorina's "Demon Sheep" and Christine O'Donnell's "I am not a witch" -- now wants cranky conservative billionaire Joe Ricketts to spend $10 million on an advertising campaign to take down Barack Obama. He's teamed up with Whit Ayers, one of his collaborators on Jon Huntsman's spectacularly terrible presidential run. Halfway through their description of "the Ricketts plan," they describe themselves as "pirates." Ay, matey, but are they after Obama's booty – or Ricketts'?

Davis, Ayers and friends should remember that Obama sent in special ops to take out Somali pirates in 2010. These pirates' fate might be similar. Politically, of course. I'm not suggesting anyone use violence against them. And they're not suggesting anyone use violence against Obama, of course -- although their pitch is chock-full of eliminationist rhetoric. From its title, which promises to "stop [Obama's] spending for good," to its description of being "locked, loaded and ready" to "hit Barack right between the eyes" and bring about "his demise," the memo the New York Times released today is right-wing hate porn, designed for maximum titillation to Ricketts, its intended audience. It may not have worked on Ricketts, whose PAC disavowed the plan Thursday afternoon after a day of negative publicity. But will it work on anyone else?

I doubt it. The 54-page PowerPoint is certainly a quick, fun read, a guide to the profiteering right-wing id. I loved the idea that they wanted to unveil the whole campaign in Charlotte during the Democratic convention: I can't think of anything that would get the oft-divided Democratic Party fired up better than right-wingers with flyover Rev. Wright hate porn. Although the plan is supposedly designed to demonstrate Obama's "incompetence," it's hard to see what Wright's views have to do with Obama's competence – unless you're of the opinion that nothing says "incompetence" like a black man having something to do with another black man. The writers reassure Ricketts they've minimized the risk of being charged with racism by lining up a "highly literate" (that must have been hard) black spokesman, Larry Elder, whom they're paying $25,000 to serve as frontman. (If I were Larry, I'd talk to an employment discrimination lawyer: I think a white guy would get more than $25,000 to front a $10 million ad campaign. Not to mention to sell his soul.)

Can the Wright fear-mongering work? I think it mainly plays with people who wouldn't vote for the president, anyway. I'm one of the few liberals who wrote with concern about the Wright revelations back in 2008. I didn’t want to believe that Obama looked the other way as Wright preached the unredeemable evil of the United States (and most white people), along with self-defeating theories of black difference and downright lies about genocide. But I never believed Obama shared those opinions. I assumed he admired Trinity's social work and political connections. I didn't think he spent a whole lot of time in its pews or listening to Wright's views. Still, I thought it was fair to look at what Obama's ties to Wright told us about his politics – and like most people, I quickly decided: not much.

Four years later, independents are able to see that Obama has in fact been a fairly hawkish president, whose foreign policy certainly didn't come from the Jeremiah Wright hymnal. In fact, his expansion of drone warfare, with its inevitable civilian casualties, is precisely the kind of thing Wright and other foreign policy critics think can result in "chickens coming home to roost." And it's not like the media ignored Wright, either. Remember that whole race speech candidate Obama had to make in March 2008 – against the advice of strategists who worried it would backfire?

The notion that the Wright mess didn't get adequate attention comes down to one fact: that John McCain wouldn't greenlight a lurid strategy to blacken Obama (literally and figuratively) with scary ads about Wright. For that, McCain earns derision from his former campaign advisors: They call him “a crusty old politician who often seemed confused, burdened with a campaign just as confused.”

What is Mitt Romney saying about the so-called Ricketts plan? He told reporters this morning he hadn't had time to read the papers (typical Romney bravery), although he'd already done his own Wright-baiting in a February interview with Sean Hannity. By this afternoon, the Romney campaign released a statement disavowing the proposal (and Romney himself then told the conservative Townhall site that he would "repudiate" the Super PAC's ad strategy). Even Ricketts did the same, in a statement from his PAC saying "he is neither the author nor the funder of the so-called Ricketts Plan to defeat Mr. Obama that The New York Times wrote about this morning…. [I]t reflects an approach to politics that Mr. Ricketts rejects and it was never a plan to be accepted but only a suggestion for a direction to take." (Jeff Zeleny of the Times later Tweeted that a reference on page 46 of the plan suggests that it had received tentative approval at a meeting in New York.)

You can decide whether or not you believe that. I think it's good news that even Joe Ricketts can be shamed out of such a crude and racialized appeal. That doesn't mean we won't see such appeals in the months to come, just that they probably won't come with a prominent billionaire's name on them.