The fall brings shows from Dane Cook, Matthew Perry and Kevin Bacon. Is there anything new to look forward to? 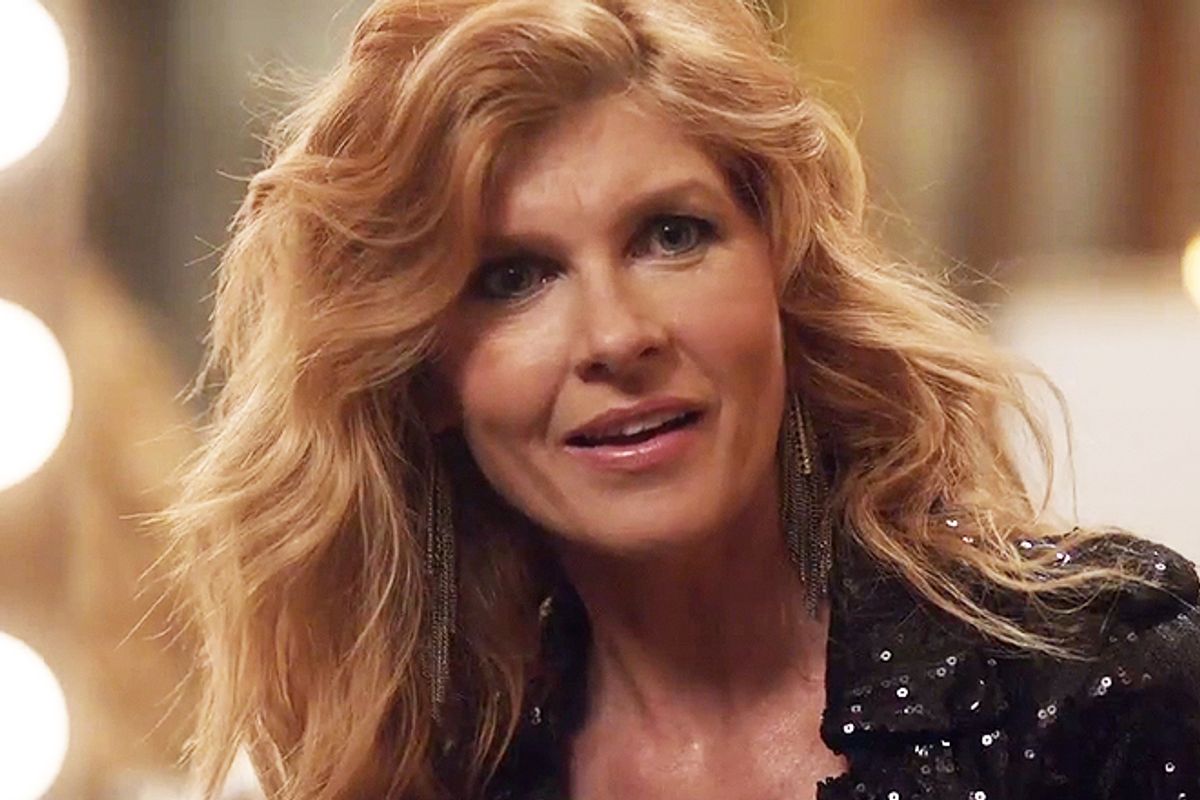 The four major networks, ABC, CBS, NBC and Fox, trotted out their new fall shows this week. All of next season’s new comedies, dramas and reality shows, the vast majority of which will be flops, got shiny trailers, two to three minutes culled from the first episode of the series, which is, for now, the only episode that exists. These trailers were made to entice advertisers into parting with some of their money, but they are also an occasion for TV obsessives to behave like fashion police, i.e., to make rash, bitchy, wildly subjective judgments based on very little information. I love this week so much.

This year, about 20 new shows will premiere in the fall, with another dozen waiting in the mid-season wings. There are dramas about haunted luxury apartments, islands armed with nuclear arsenals and the making of Vegas. There are procedurals starring Sherlock Holmes, Jersey girls turned lawyers and a Mob Doctor. One show has Mrs. Coach playing a country singer, one has Kelly Kapoor falling into a swimming pool while riding a bicycle, and another has Kevin Bacon chasing serial killers. There are two sitcoms starring gay people, one about a family who lives next door to aliens, and others featuring Matthew Perry, Lily Tomlin, Dane Cook and a screeching monkey. If each network had at least one show last year about a sexually active, provocative, sassy woman — the lady sitcoms — there is no such equivalent trend this year. There is just a lot of TV, some of which will be good, and most of which will be bad. Here are my thoughts on what look to be the best and worst shows of the upcoming season, network by network.

CBS is the most stable and highest-ranked network in the land, a position it has held for many years by eschewing any and all concerns about both coolness and quality. CBS does not put on risky, ambitious shows some small portion of the Internet will fall in love with and loudly plead for, whatever the show’s ratings. That is a move for losers like NBC. CBS, instead, puts on things that work, and the things that work on CBS are usually polished, ultra-competent procedurals and comedies that make me want to gouge my eyes out, but that are the most popular in America. So, arriving on CBS this fall: “Elementary,” starring a tattooed Johnny Lee Miller as a modern-day Sherlock Holmes and Lucy Liu as Dr. Joan Watson, his drug minder;  “Made in Jersey,” about a Snooki turned lawyer and made good, starring a charming British actress (Janet Montgomery, whom CBS insisted I would like, and, aggravatingly, I really, really did ) putting on a very thick Jersey accent; and “Partners,” a sitcom about two best friends, a straight guy and a gay guy (played by the delightful Michael Urie), in serious relationships, a sort of progressive premise for CBS, until you see the trailer. CBS is stretching itself this year with one big, ambitious show, with a bland name. “Vegas” stars Dennis Quaid as a good guy and Michael Chiklis as a bad one in 1960s Sin City. There is a lot of “buzz” around this program, but all I could think when watching was that in the ‘60s, shaved heads were not a thing (ahem, Mr. Chiklis), and that CBS will find a way to make this boring.

If you ask, Fox will tell you that it, not CBS, is the most stable and highest-ranked network in the land, and if you just care about people under the age of 49, it is. Since it ain’t broke, Fox isn’t fixing it, putting just three shows on this fall, and holding its extremely creepy, high-profile, Kevin Bacon-hunts-a-serial-killer-with-acolytes drama, “The Following,” for mid-season. Coming in the fall is Mindy Kaling’s poorly named “The Mindy Project” (on the show, she plays a character named Mira), which looks good, and “Ben & Kate,” which is not as cool or buzzy, but I thought looked better. Nat Faxon and Dakota Johnson (daughter of Melanie Griffith and Don Johnson) star as the titular siblings, one an overgrown man child, the other a single mom. The trailer is very, very sweet, which would make it a better fit with “New Girl,” that most emo of shows, than the spiky, sardonic “Mindy Project." The only other show Fox is debuting in the fall is the drama “The Mob Doctor,” about a doctor (“My Boys'” Jordana Spiro) who has to do healthcare-related favors for the mob. I can’t bring myself to dub this "worst," a little because Spiro is very likable, and a lot because “The Mob Doctor” is clearly the best titled new show of the season.

NBC has been a disaster for years now, and each fall, in the hopes of climbing out of its sorry position, it orders a ton of new shows. This year, it ordered 12, and, unfortunately, none of them look that great. One of the dozen is “Next Caller,” a sitcom starring Dane Cook as a misogynist shock jock forced to work with a female co-host. This show is already a punching bag, likely to remain the season’s go-to example of the crappy sitcom, basically because it stars Dane Cook being a dick. While it’s hard to argue with this logic, by far the most horrible-looking show coming to NBC in the fall is “Guys With Kids,” a multi-camera comedy about three dudes with babies and ladies and no funny lines whatsoever. I’m also not particularly jazzed over the drama “Chicago Fire,” which looks almost exactly like a more melodramatic “Third Watch."

As for best, well, there’s a lot of “could be OK” on NBC’s schedule: there’s "Go On," about Matthew Perry in a grief group; Justin Kirk in "Animal Practice" as a pet-loving, people-hating, lady-shagging veterinarian; and Ryan Murphy’s new sitcom about a gay couple and their surrogate, "The New Normal," which I would be much more excited about if I hadn’t been burned by Murphy so many times before (and if there wasn’t that bad Mariah Carey joke in the promo). That leaves the J.J. Abrams-produced “Revolution,” set 15 years after all the electricity in the world has gone out forever. This may just end up being another irritating, never-ending mystical conspiracy show, but I'm a sucker for anything post-apocalyptic.

Ratings-wise, ABC is not in a much better state than NBC, except it has two new shows I can't wait for. In “Nashville,” "Friday Night Lights'" Connie Britton stars as an aging country singer who has to figure out the next step of her career while dealing with an obnoxious, successful Taylor Swift-type played by Hayden Pantierre. It’s very, very soapy, but it involves Mrs. Coach singing and saying wise things with a Southern lilt and lots of sequins, and, therefore sounds wonderful to me. Then there’s “Last Resort,” created by “The Shield’s” Shawn Ryan. It stars Andre Braugher as the captain of a submarine who disobeys an order to fire a nuke on Pakistan. He, his crew, and his sub are then pursued by the U.S. military until they land on a tropical island, turn on the sub’s nukes, and start politicking. This is an original, far out premise, plus “Felicity’s” Scott Speedman is in it, and I really missed his mumbling.

Whereas NBC's unpromising shows seem merely blah, ABC's least promising shows look to be potentially awesome, fascinating misfires. It is the network that aired "Work It," after all. (ABC does have one merely bad and boring looking sitcom, "The Family Tools.") First, there is “The Neighbors,” ABC’s highest-profile new comedy, about a family that moves into a suburban community populated by aliens. The family can tell their neighbors are aliens because when they clap their hands over their heads, they transform into green aliens. It’s a very 1980s premise with a single-camera comedy execution, and no good jokes. Then there’s “Zero Hour,” starring “ER’s” Anthony Edwards as a conspiracy theorist drawn into the mother of all conspiracy theories after his wife is kidnapped. The trailer involves clues packaged in the backs of clocks, Nazis, possessed babies, and various other artifacts left over from the “Alias” or "DaVinci Code" sets. Can't wait.