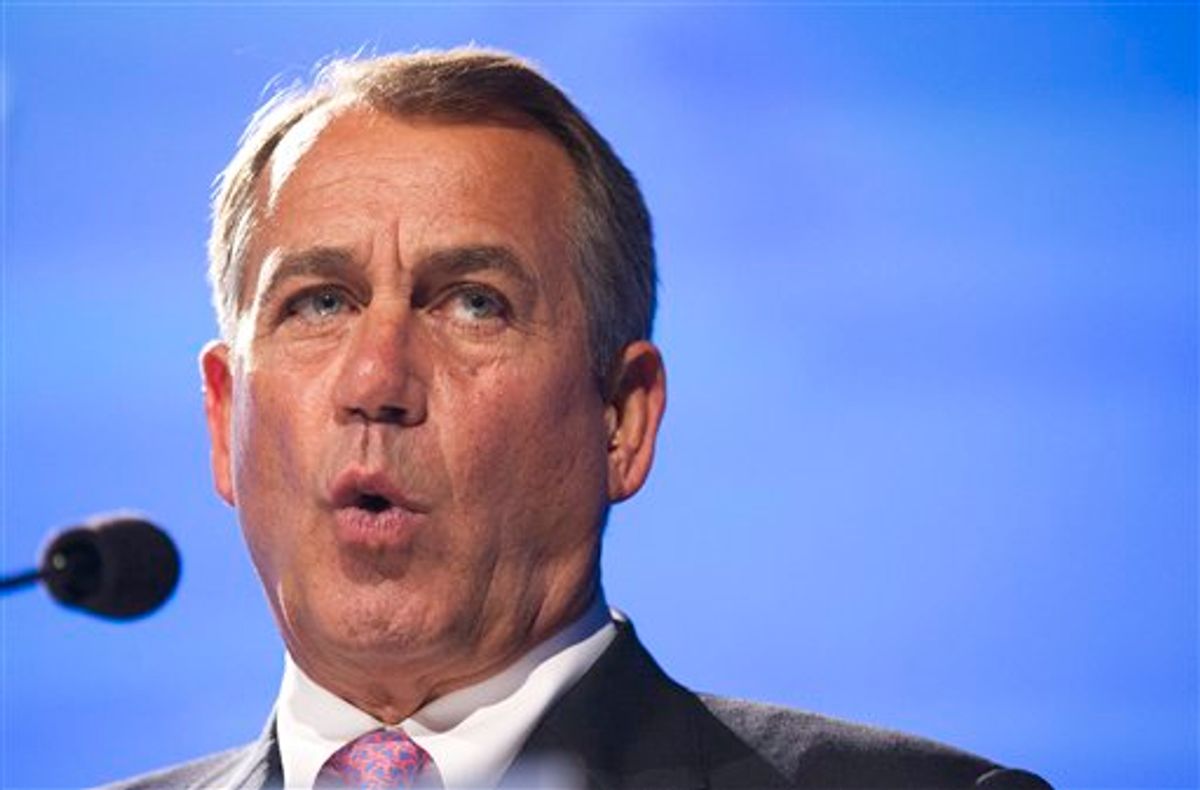 House Republican leaders put out the word on Wednesday night that they’ll be prepared to swing into action if the Supreme Court invalidates President Obama’s healthcare law next month.

The political necessity of this was obvious: “Obamacare” itself doesn’t tend to poll that well, but some of its individual components do, and when voters are asked which party they trust more on healthcare, Democrats enjoy a clear advantage. So if the court does away with the law, it will be hard for Republicans to hit the campaign trail this fall without having some sort of plan that they can point to for dealing with the issue.

Of course, calling what GOP leaders leaked a “plan” is really stretching the term. As stories in the New York Times and Politico made clear, the intent seemed more to shield the party from Democratic attacks that it helped kill off provisions of the law that are actually popular:

If the law is partially or fully overturned they’ll draw up bills to keep the popular, consumer-friendly portions in place — like allowing adult children to remain on parents’ health care plans until age 26, and forcing insurance companies to provide coverage for people with pre-existing conditions. Ripping these provisions from law is too politically risky, Republicans say.

The problem, as critics were quick to note, is that the popular components of Obamacare are only made feasible by the unpopular parts. Forcing insurance companies to cover preexisting conditions only makes sense with the individual mandate that Republicans abhor, since it compels young and healthy people who would otherwise forgo coverage to enroll too. Beyond that, the Times reported, the House GOP was prepared to consider a variety of modest measures that might bring down insurance premium rates slightly:

Republicans are dusting off proposals that date back more than a decade: allowing individuals to buy health insurance across state lines, helping small businesses band together to buy insurance, offering generous tax deductions for the purchase of individual policies, expanding tax-favored health savings accounts and reining in medical malpractice suits.

But even this may be too much for the right. By late Thursday morning, just hours after the GOP leadership’s plans were leaked, Rep. Paul Ryan threw cold water on the idea that Republicans would offer any specific legislation before the November election, telling the Washington Examiner: “Now, we’ve got nine weeks of session left. Do we want to cram through our own 2,700 page vision? No, that’s what the country hated. But do we believe in patient-centered health care and market-based medicine? A lot of us have put time and effort into this, yeah.”

And by the end of the day, Politico reported that a revolt had broken out on an influential conservative Google email group that GOP House leaders monitor, where the sentiment seemed to be that publicly supporting any components of Obamacare – even the popular ones – would amount to a sellout of conservative principles.  The uprising, according to Politico, began almost as soon as the stories leaked Wednesday night, leading to this:

Cognizant of the conservative anger, Dave Schnittger, Boehner’s longtime deputy chief of staff, sent a separate email to a small group of fellow leadership aides Wednesday night, saying that, during his weekly media availability, the speaker would “knock … down” the plan that had leaked.

Boehner did not address health care once in his 12-minute news conference. Aides say he was prepared to talk about it — if the issue came up.

One of the first moves Republicans made when they reclaimed the House in 2011 was to pass legislation repealing the healthcare law. It was a symbolic move, since it had no chance of clearing the Senate, but it was also billed as the first step. Soon, Republicans insisted, they’d unveil a new, better plan to replace Obamacare. More than a year later, that plan still hasn’t seen the light of day, and if the events of the last 24 hours are any indication, there’s not going to be one before the election – or maybe ever.