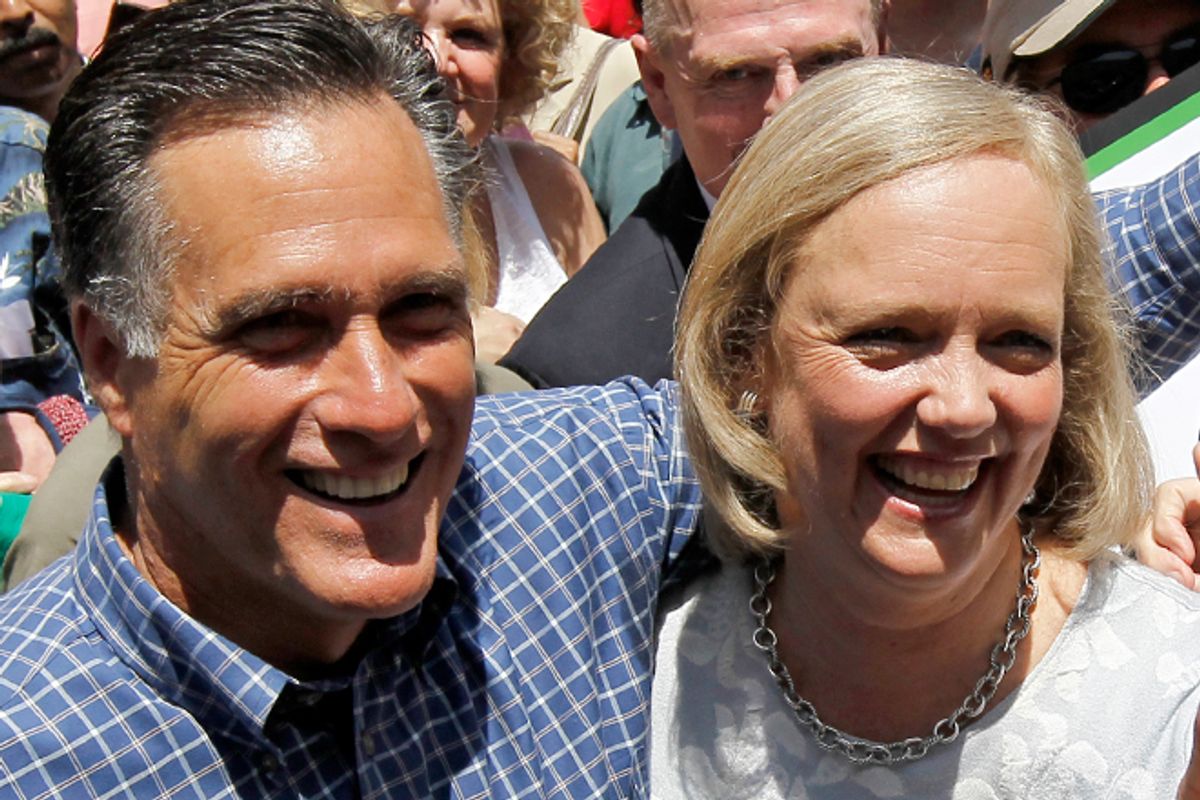 When Meg Whitman ran for governor of California in 2010, the former eBay CEO told voters that her business background made her the right choice to boost job creation in a state troubled by high unemployment. Sound familiar? It's the same spiel we hear from Mitt Romney every single day.

As a consolation prize for getting clobbered by Jerry Brown in the gubernatorial election, Whitman landed a plum job of her own -- CEO of Hewlett-Packard, a company that, like California, has been going through some tough times. But this week Whitman made clear that as a business leader, her approach to job creation doesn't quite mesh with her political promises. Multiple media outlets are reporting that HP is planning to cut its workforce by around 30,000 jobs -- a number that accounts for 7-8 percent of HP's total workforce.

Whitman's decision will probably result in some layoffs in California, but it wouldn't be fair to label her an outright hypocrite on the basis of this strategy alone. Downsizing may well be the right course for Hewlett-Packard, which is having a hard time adjusting to an era where computing is moving to the smartphone and leaving the PC far behind. But there's a data point in the New York Times' report on the layoffs that deserves close attention: "China, which is one of H.P.’s highest growth areas, will probably be spared."

Again, this makes strict bottom-line sense. Hewlett Packard, by its own admission, now derives around 60 percent of its revenues from overseas. China is the world's fastest-growing market for computer gizmos. Cutting staff in China would be suicidal. And HP's behavior is in no way extraordinary. In April, the Wall Street Journal reported that between 2009 and 2011, fully three-quarters of the new jobs created at the 35 largest U.S. multinationals were overseas. And this isn't just about offshoring to cheaper labor. Overseas is where the demand is.

The job creation plan outlined by Whitman when she ran for governor included cutting red tape, lowering various government fees, and tax breaks. Again, it's an agenda that maps quite closely to Romney's -- and that's no accident: Whitman was Romney's finance chair during his 2008 campaign, and hosted a California fundraiser for him in March. But while cutting regulations may boost corporate profits,  it doesn't do a darn thing for boosting demand. HP is probably more likely to take the money saved via a tax break and spend it on a new R&D center in Shanghai than it is to staff up in Silicon Valley.

All of this explains why having an illustrious business resume doesn't mean that one is automatically qualified to occupy the White House in a time of economic stress. Business executives have a mandate to act in their own self-interest -- to seek profit by any means, including  downsizing in the U.S. and pouring resources into China. That's why HP's "Government Affairs" page stresses its support for " free trade and the reduction of barriers across borders," even in the face of growing evidence that outsourcing to China has a negative impact on U.S. job creation.

A political leader is supposed to think in terms of the larger public interest -- which means things like figuring out how to fund education or pay for the social welfare net that protects the unemployed and feeds the hungry. California's voters figured that out when they rejected Whitman. Once again, it will be interesting to see where the general public at large comes down in the case of Romney.