Urban entertainment districts: Blocks where no one has fun

Cities keep trying to create downtown cool with dull nightlife districts. But who wants to hang out at the mall? 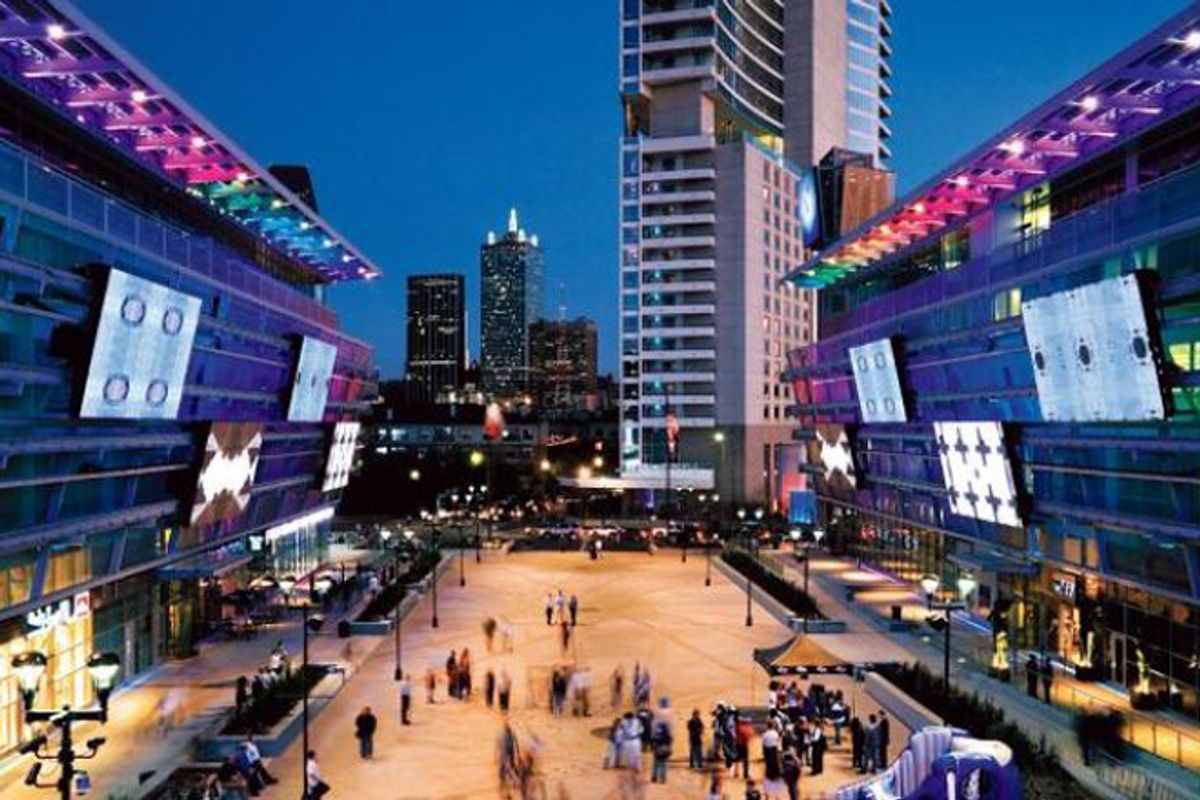 If you took all the clichés about horrible urban design and shoved them into 75 acres, you'd probably end up with something pretty close to Dallas' Victory Park. A pre-planned billion-dollar collection of imposing hyper-modern monumental structures, high-end chain stores, enormous video screens, expensive restaurants, a sports arena and tons of parking, completely isolated from the rest of the city by a pair of freeways, Victory Park is like the schizophrenic dream of some power-hungry capitalist technocrat.

Or in this case, his son's. The -- neighborhood? development? -- was built by Ross Perot Jr. as an "urban lifestyle destination." But what it really is is an entertainment district: that swath of cityscape whose character has been preordained by a city council vote and is now identified by brightly colored banners affixed to lampposts. (The entertainment district's close cousin, the arts district, is often lurking somewhere nearby.)

What could be wrong with a district where nightclubs and galleries are encouraged to thrive? Nothing, necessarily; done right, a city can help foster these scenes with a gentle guiding hand. Constructing an entire milieu from whole cloth, however, is where cities get into trouble. "The problem with these created-overnight districts is that you're trying to create a culture as opposed to letting one grow," says Nathaniel Hood, a Minneapolis-based transportation planner. "You're getting the culture that one developer or city council member thinks the city needs, as opposed to the ground-up culture that comes from multiple players."

Victory Park is an extreme example, hyper-planned right down to the performances to be held at its American Airlines Center. ("A U2 concert is fabulous," Perot told the Wall Street Journal. "KISS, not so good.") But the Dallas Arts District, though less micro-managed, has struggled with its identity as well. Conceived in the 1970s by design consultants in faraway Boston, it relocated the city's arts institutions to the northeast corner of downtown. Another planning consultancy drew the boundaries of the district, and one by one, the city's cultural icons were moved there. Today, it contains the Morton H. Meyerson Symphony Center, the Nasher Sculpture Center, the Dallas Museum of Art, and the Winspear Opera House. It's home to buildings by Renzo Piano, I.M. Pei, Rem Koolhaas and Norman Foster. In fact, you'll find everything in the Dallas Arts District except a lot of people, says Patrick Kennedy, owner of the Space Between Design Studio and the blog Walkable DFW.

"A district inherently becomes a single-use idea," says Kennedy. "Everything has to be 'art.' You end up with a bunch of performing arts spaces and when they're not in use it becomes a vacuum." This vacuum has made the district itself a museum of sorts, something impressive to observe but strangely inert. (The Chicago Tribune called the area "the dullest arts district money can buy.") It has few apartment buildings; one is the new Museum Tower, a 42-story condo residence that, as of last month, had sold only 16 of its 102 units. The Museum Tower recently made news when its glass facade began reflecting 103-degree sunlight directly into the Nasher Sculpture Center next door. Now the tower's developers and the Sculpture Center are embroiled in a fight over which party should alter its building -- essentially, arguing over whether art or residents should reign supreme in the Dallas Arts District.

That's a defeatist choice to have to make, but the monocultures created by urban districting make it almost inevitable. At last week's 20th annual Congress for the New Urbanism, Hood spoke about the folly that is Kansas City's Power & Light District, an $850 million entertainment district whose neon signage is as blinding as its eagerness to be hip. But no one would mistake Power & Light for a neighborhood created by cool kids. "Land costs are higher downtown, so you have to create something genuinely unique," says Hood. "It can't just be an outdoor mall with slightly cooler bars."

But that's exactly what you get in the Power & Light District: themed venues catering to neatly delineated tastes, Epcot-style: the Maker's Mark Bourbon House & Lounge ("Southern Hospitality rises to a new level"), the Dubliner ("true Irish ambiance"), Howl at the Moon ("a completely unique dueling piano entertainment concept") and PBR Big Sky ("every cowboy and cowgirl's nighttime oasis"). The model suggests that city life is nothing more than a selection of personal consumption experiences. But at times, the district feels more like a very enthusiastic ghost town -- one with a $12.8 million budget shortfall.

It's not just that the developers are boring people -- the economics of single-owner districts incentivize blandness. Chain stores and restaurants can afford to pay higher rent, so they get first dibs. To boost rents even higher, tenants are sometimes promised that no competition will be allowed nearby. "Starbucks will be willing to pay the higher rent if [the developer doesn't] let other cafes into the area," says Hood. And forget about occupying the Power & Light District -- you're on private property. For a full list of the rules (no bicycles, panhandling, profanity on clothing) you can consult its website.

"A true [arts or entertainment] district is always sort of moving around," says Kennedy. "It's wherever the bohemians find cheap real estate." For instance, compare Power & Light or Victory Park or even the Dallas Arts District with Boston's Kenmore Square, which developed in the '80s and '90s as a wildly diverse barrage of punk venues, rock clubs, dive bars, sports bars and beloved hole-in-the-wall restaurants, all anchored by Fenway Park, bringing together an unlikely cross-section of Bostonians into one spontaneous not-an-entertainment-district for freaks, foodies and sports nuts alike. And despite being unplanned and unsubsidized (or, more accurately, because of that), Kenmore eventually upscaled in exactly the way city leaders hope for.

Kenmore Square, by the way, also disproves the conventional wisdom that the presence of a stadium or arena automatically dooms neighborhoods. "Fenway Park is a beautiful example of a large entertainment-type building sitting in a neighborhood that's very vital," says Dean Almy, director of the Dallas Urban Laboratory, "and one of the things that makes it vital is that it isn't all about Fenway Park."

But mainly, it shows that these districts work better without all the bureaucratic attachment parenting. A great example is Cincinnati, where, rather than busting in with relocation plans and a branding scheme, the city has designated five neighborhoods Community Entertainment Districts where aspiring restaurateurs can simply get a liquor license directly from the state for about $1,500, rather than on the open market where they cost up to $30,000.

Milwaukee has taken a similarly hands-off approach to Water Street, an area on the city's waterfront where a fairly raucous bar scene emerges nightly. Daniel Campo, assistant professor of architecture and planning at Morgan State University, co-authored a study of the Water Street scene and identified several factors that make it work: Small, older buildings (cheap enough to open a dive bar in), flexible facades (no historic designations), open late (naturally) and located on a slightly dicey fringe of town where chaos can unfold.

Campo characterizes such spaces as areas of "benign neglect," neighborhoods where  entertainment zones can naturally emerge. "These are places where no one lives, the cops don't go there, people don't care about that area." He compares it to New York in the '70s and '80s, when the police had bigger fish to fry than kids drinking beer on the street. "You have to be comfortable with the way these places work. There's going to be loud people, messes on the sidewalk -- it's not for everyone." They're an example of what philosopher Michel Foucault called heterotopias: "Neither utopian or dystopian, but a paradoxical combination of both."

Water Street is an example of how, when the city declines to step in, citizens will. In a less cacophonous way, Cleveland has done this with its Gordon Square Arts District, where a group of nonprofits got together and created their own urban district where theaters already existed. "You had three very humble nonprofit organizations, no powerful boards, that just needed capital improvements," says the District's executive director Joy Roller. Their early efforts got $2 million to encourage arts in the area and established Cleveland as a "thought leader" in arts-district development.

What these areas of Cincinnati, Milwaukee and Cleveland have in common is (and I hate to even utter this often meaningless phrase) urban authenticity. It's a notion that gets tossed around a lot, but here it truly applies -- people know when they're being handed an experience that was created by committee for purely economic purposes. Planned districts are about "applying a label and hoping your city lives up to it," says Kennedy. Instead, cities should "foster a natural emergence of character. You never know what's going to pop up."