Faux history for the GOP

Republicans love David Barton and his new book, "The Jefferson Lies" -- even though it gets history wrong 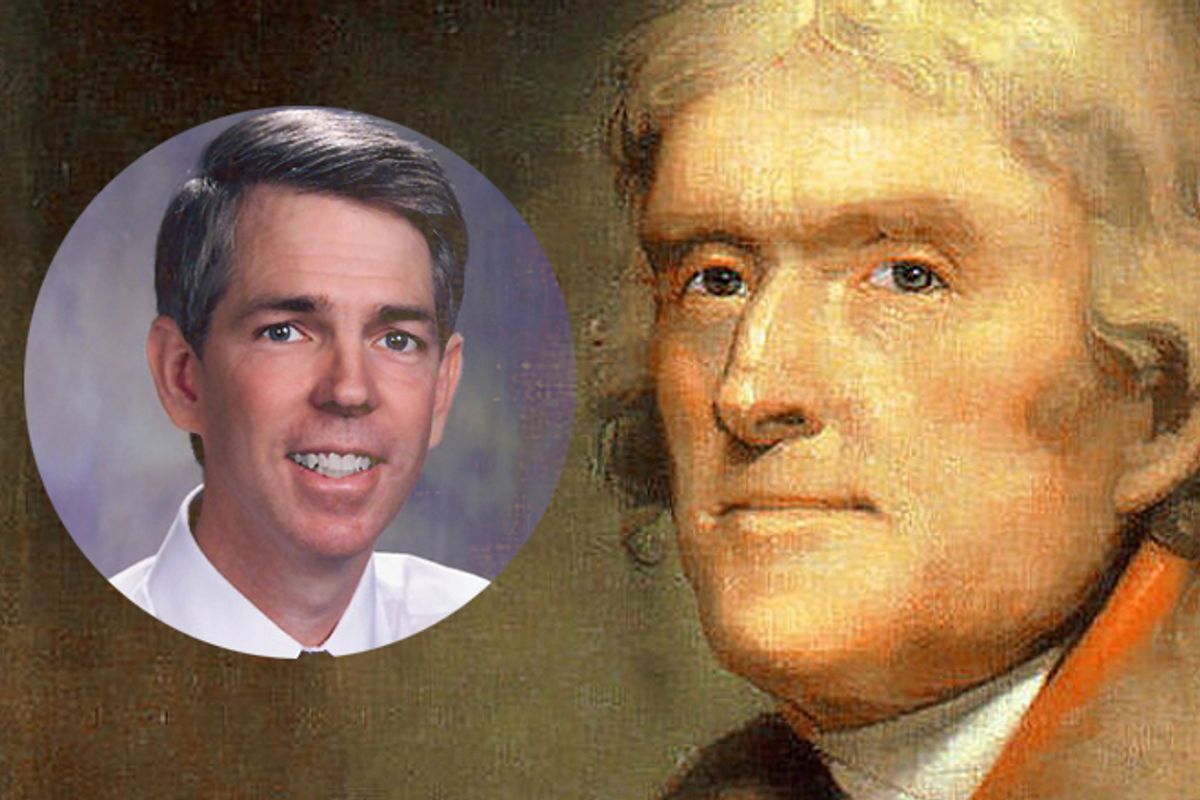 Earlier this month, the evangelical writer David Barton’s new book, “The Jefferson Lies,” hit the New York Times bestseller list for hardcover nonfiction. Barton isn’t popular, however, only with the ordinary American reader. On May 8, John Boehner authorized the use of Statuary Hall in the U.S. Capitol for a religious service to commemorate the first inauguration of George Washington. Among the speakers was Barton, who is revered by social conservatives because he argues that the nation was founded primarily by evangelical Christians on explicitly Christian teachings.

Barton -- “one of the most important men alive,” according to Glenn Beck -- is frequently criticized as a pseudo-historian by progressives and academic historians for his claims about the Founders. He is now facing scrutiny, however, from evangelicals. After Barton’s speech in the Capitol, John Fea, chairman of the history department at evangelical Messiah College, accused Barton of “peddling falsehoods” about Washington, and asked, “Is it time to gather Christian historians together to sign some kind of formal statement condemning Barton's brand of propaganda and hagiography?”

There is no question that Barton’s history lessons are important to the conservative wing of the GOP. Barton, who was named one of Time magazine’s top 25 most influential evangelicals in 2005, was also tapped by Tea Party Caucus chairwoman Michele Bachmann to teach classes on the Constitution to congressional members in 2010.

During the GOP presidential primary season, Barton was a central figure in the religious right’s effort to crown a religious conservative as the GOP front-runner. In 2011, at the Rediscovering God Conference in Iowa,  Mike Huckabee gushed:

I almost wish that there would be a simultaneous telecast and all Americans would be forced, forced at gunpoint no less, to listen to every David Barton message and I think our country would be better for it. I wish it’d happen.

In 2010, before Newt Gingrich decided to run for president, he appeared on David Barton’s Wallbuilder’s radio show, telling Barton:

Most recently, speaking in Statuary Hall, Barton related a legend about George Washington’s prayer in the snow at Valley Forge. In the story, a British loyalist overheard Washington praying, went home to his wife and proclaimed that the revolutionaries will win the war because of Washington’s fervent prayers. According to historian Fea, Washington probably did pray for success, but the story of Isaac Potts stumbling upon Washington praying in the snow is a legend. In his book “Was America Founded as a Christian Nation: A Historical Introduction," Fea demonstrates that the facts don’t add up. For instance, Potts was probably not near Valley Forge at the time and he was not married at that time, meaning he could not have had a conversation with his wife about Washington’s prayer. Fea says this kind of revisionism is common, saying that “Barton continually tells stories of the past that are not true.”

Over the past year, I read some of Barton’s claims about history, checked them out, and found most of them to be problematic. Some of these claims have been restated in “The Jefferson Lies.” For example, Barton claims that Jefferson did not free his many slaves because of restrictions in Virginia law. Barton says Jefferson could not free them because by 1826, when Jefferson died, the law forbade such emancipations. This claim is quite misleading. In 1782, Virginia passed a law on manumission, which allowed the emancipation of slaves at any time, not just at death. In fact, many slaves were freed by other slave owners after this law passed. However, after this law passed, Jefferson sold some slaves for cash, instead of freeing them. Although legal provisions relating to emancipation were tightened a bit in 1785 and further in 1806, there was a 24-year window wherein Jefferson could have freed his slaves while he was alive.

In 1806, Virginia law was changed to require emancipated slaves to leave the state or face being resold into slavery. In fact, Jefferson favored deportation. He wrote in his autobiography, “Nothing is more certainly written in the book of fate than that these people are to be free. Nor is it less certain that the two races, equally free, cannot live in the same government. Nature, habit, opinion has drawn indelible lines of distinction between them. It is still in our power to direct the process of emancipation and deportation peaceably ...” In “The Jefferson Lies,” Barton refers to the 1806 law but minimizes Jefferson’s views on deportation, and does not indicate that emancipation could have occurred before a master’s death.

One chapter in “The Jefferson Lies” deals with the so-called Jefferson Bible. The Jefferson Bible refers to Jefferson’s extraction of passages from the New Testament Gospels that he believed were really the words and deeds of Jesus of Nazareth, leaving aside what he believed was added by others. Jefferson said the work was like extracting diamonds from a dunghill. Jefferson made two such efforts, one in 1804 and the other sometime after 1820. In “The Jefferson Lies,” Barton tells readers that Jefferson included miracles of healing from Matthew chapters 9 and 11. However, a review of the table of texts used by Jefferson to construct his works reveals that he did not include the passages Barton claims.

While there are many false claims in “The Jefferson Lies,” another obvious historical molehill Barton makes into a mountain is Jefferson’s signature on shipping passports that are dated with the words, “in the year of our Lord Christ.” Common diplomatic language at the time, those actual words were required by treaties with European nations and included on preprinted forms. Barton says Jefferson chose to include that religious language into his presidential business. Not so. Jefferson, like Adams before him and several presidents after him had no choice because, as Jefferson once told Secretary of the Treasury Albert Gallatin, “Sea-letters are the creatures of treaties.”

My co-author Michael Coulter and I have addressed these and other claims in our book, “Getting Jefferson Right: Fact Checking Claims About Our Third President.” For an article that later became a part of that book, I wrote Barton and called Wallbuilders without response. In April, 2011, Barton declined to appear with me on a Christian radio program. According to Fea, this is not surprising. “When he is called out on these falsehoods by a respectable historian, even evangelical historians who for the most part share his faith, he refuses to admit to his errors.”

After years of being attacked by progressives, will Barton reexamine his claims due to friendly fire? With “The Jefferson Lies” hitting the New York Times list of bestsellers, it seems clear that being fast and loose with the facts sells well. All the more reason for people in the evangelical community to subject claims about the Founders to a renewed scrutiny.