Romney uses Booker, Ford and Rattner to attack Obama. Can Dems take back their party from finance capital? 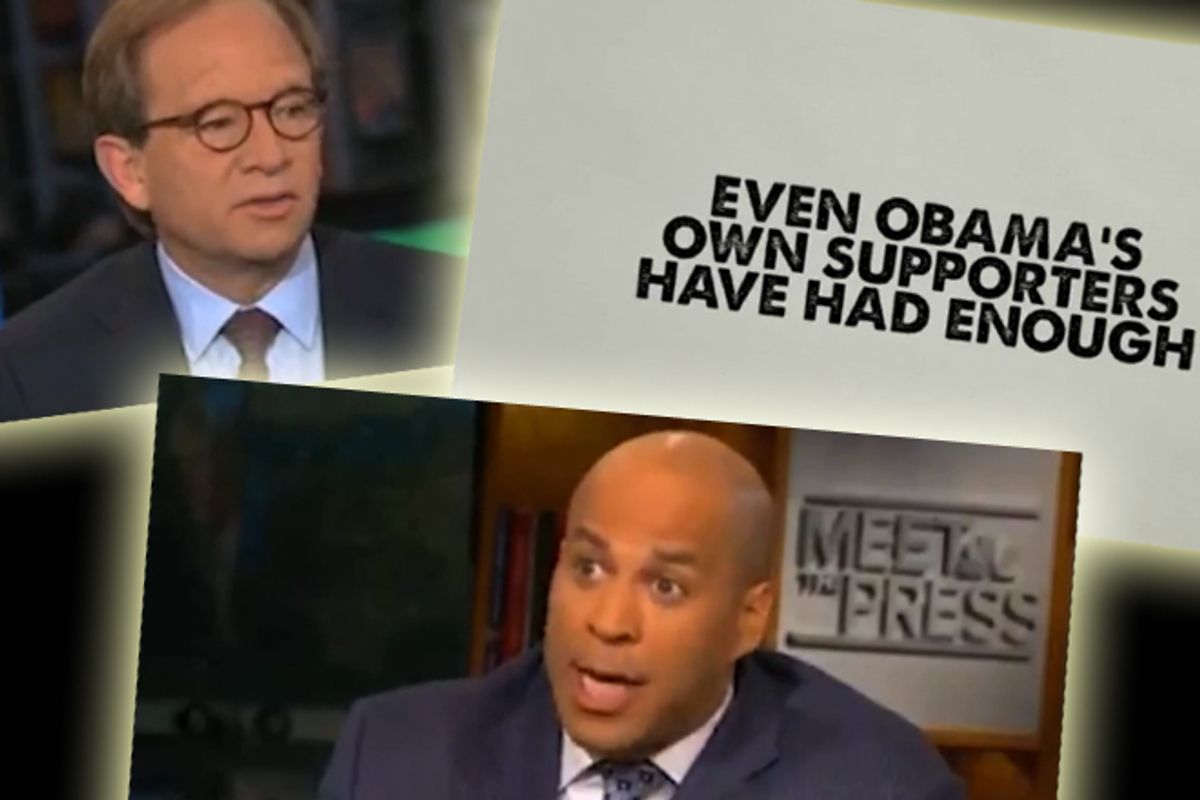 Mitt Romney put out an ad Monday using Newark Mayor Cory Booker, along with former Tennessee politician Harold Ford Jr. and former auto czar Steve Rattner, to attack the Obama campaign for its criticism of Romney's work with Bain Capital.  "Have you had enough of President Obama's attacks on free enterprise?" the ad asks. "His own supporters have."

Booker, of course, has become infamous for telling David Gregory on "Meet the Press" Sunday that Obama ads criticizing Romney's Bain work are "nauseating" and "crap." Then Harold Ford Jr., who laughably tried to become the senator from Wall Street in 2010 after failing to become the senator from Tennessee in 2006, couldn't stand seeing Booker getting all the centrist Wall Street love, and jumped in behind him: ”I would not have backed off the comments, if I were Mayor Booker," Ford told his friends on MSNBC's "Morning Joe" Monday. "Private equity is not a bad thing. Private equity is a good thing in many instances." For good measure the Romney ad also scooped up Rattner's criticism – also on "Morning Joe" – from a few weeks ago: "I don't think there's anything Bain Capital did that they need to feel bad about," Rattner told the crew.

Democrats are wringing their hands over the latest circular firing squad, but I think all the self-promotion and betrayal is a good thing. It should remind Democrats why many working- and middle-class people either sit out elections or don't think there's a big difference between the parties. For the last 20 years, folks like Rattner, Booker and Ford have tried to make sure their party courted Wall Street more slavishly than the GOP – and they often succeeded. We ought to remember that history before we get carried away with our populist high-fiving in the 2012 campaign, convinced that Obama deserves to win the fealty of the unemployed, underemployed and Occupy Wall Street, too.

I've always kind of liked Cory Booker, even while knowing he was a privileged Ivy Leaguer in love with his own capacity to reconcile conflict and also to convince rich people and Republicans that Democrats don't hate them – kind of like Barack Obama, before he got sandbagged by the modern GOP. I still don't think Booker has gotten nearly enough grief for his multilayered betrayal of Obama on "Meet the Press." For one thing, he stepped on the president's message, which is a terrible move for a trusted surrogate. He also played the despicable false-equivalence game – and he did it again in the video he made to try to walk back some of the damage he'd done. Booker keeps claiming what he really finds "nauseating" are the negative super PAC ads "from both sides" – but the Bain attack is coming directly from the Obama campaign (although the pro-Obama Priorities USA contributed one ad to the mix). Besides, it's outrageous to equate the Bain attacks with the Fred Davis-Joe Ricketts plan to morph the president into Rev. Jeremiah Wright. I expect Republicans to try to make that lame argument, not Democrats.

Maybe most unfair, Booker and Ford endorsed the GOP lie that Obama has it in for private equity generally, not merely the excesses of firms like Bain. They're only egging on the Wall Street wusses who act like the president has nationalized the banks just because he signed on to the flawed Dodd-Frank bill and once called a few of them "fat cats." Booker and Ford are clearly only out for themselves, anxious to prove there are some Democrats who still love Wall Street. Of course, this shouldn't surprise us: Booker has teamed up with hedge fund moguls and other super-rich private equity folks (as well as Mark Zuckerberg and Bill Gates) in the course of reforming Newark's schools as well as generally advancing his career. (He's also ignored public records laws to keep those big donors from scrutiny.)

I wrote about Rattner's comments earlier. By all accounts he did a decent job as auto czar, helping the president restructure the big three automakers and save the industry. But the big Democratic Party donor is clearly trying to pull the party back from those who are coming to understand that its fealty to Wall Street has hurt it with working- and middle-class voters – and much more important, has hurt the country. It's Democrats who have for years protected the carried interest rule, keeping tax rates low for investors and private equity principals like Mitt Romney. Booker, Ford and Rattner are firing a warning shot at Democrats who are wandering away from their Wall Street. To its credit, the Obama team is doubling down on its Bain campaign, and let's hope that continues.