The Newark mayor did a lot of talking on “The Rachel Maddow Show,” but he didn’t really say anything 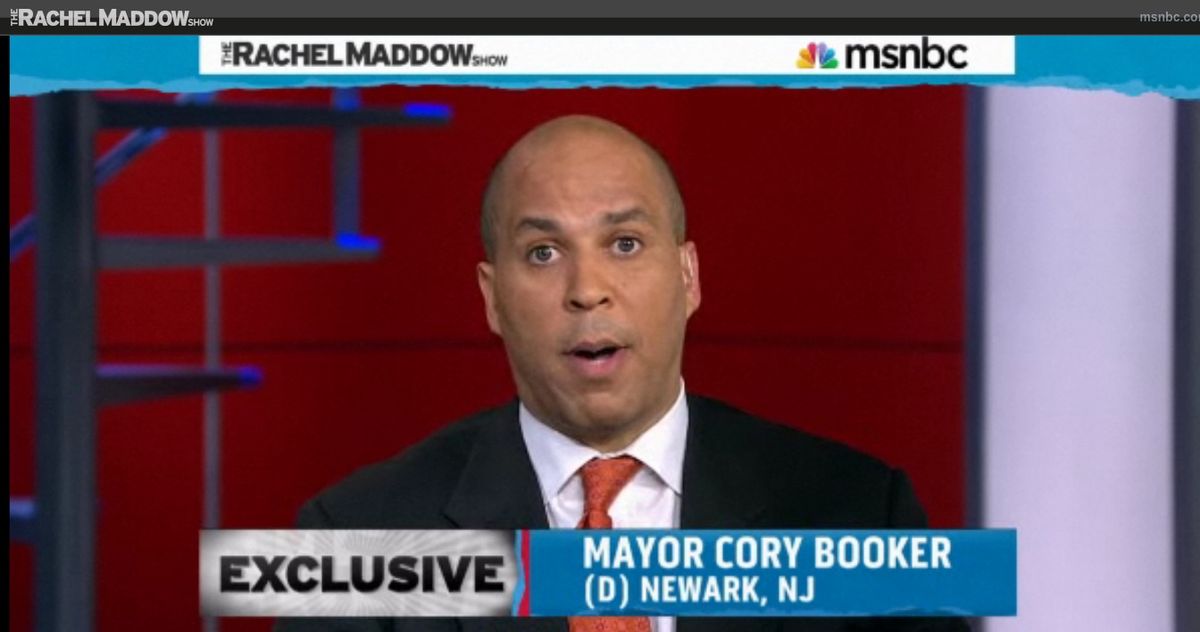 Cory Booker did an awful lot of talking last night, but he didn’t really say anything.

After refusing requests all day, the Newark mayor agreed late in the day to a live interview on Rachel Maddow’s MSNBC show. By this point, Republicans had launched an online petition urging their supporters to “stand with Cory” against the Obama campaign’s “attacks on the free market.”

“It wasn’t until the GOP went across that line that I said, ‘Forget it. I’ve heard all I can stand and I can’t stand no more,’” Booker told Maddow when the interview started.

If you only watched Booker’s 12-minute performance last night, you’d probably be tempted to believe his claim of near-total innocence and even victimhood in an episode that overtook the presidential campaign Monday. This only makes sense; Booker can talk with the best of them. But in all of his earnest pleadings and verbose answers, he never actually confronted what landed him in hot water in the first place.

On Sunday’s “Meet the Press,” Booker seemed to call the Obama campaign’s attacks on Mitt Romney’s private equity record “nauseating” and to liken them to efforts by some on the right to make Jeremiah Wright an issue in the race. On Maddow’s show, he played off the “nauseating” line as a reference to super PAC-era negative campaigning in general and copped only to some sloppy phrasing.

“Obviously, I did things in the ‘Meet the Press’ interview, as I told you, that did not land the points that I was trying to make,” Booker said. “And in some ways, frustratingly, I think I conflated the attacks that the Republicans were making with Jeremiah Wright with some of the attacks on the left. And those can’t even be equated.”

And as he did in a hastily produced video on Sunday night, Booker insisted that Romney’s Bain Capital past is fair game, and that he’s happy to “echo” Obama’s efforts to highlight it. Other than that, though, Booker mainly talked around the private equity issue. He invoked marriage equality several times, the war on women, universal healthcare and college tuition affordability, and bragged that “I’ve been standing with Barack Obama since before most people were standing with Barack Obama.” He also excoriated Republicans for not focusing on issues affecting cities like his and moralized at length about the corrosiveness of attack ads.

This was damage control at its slipperiest. The reality is that Booker did more than just clumsily register his objections to the negative tone of politics on “Meet the Press.” He specifically stood up for Romney’s private equity firm and its record:

"I have to just say from a very personal level, I'm not about to sit here and indict private equity. To me, it's just we're getting to a ridiculous point in America. Especially that I know I live in a state where pension funds, unions and other people invest in companies like Bain Capital. If you look at the totality of Bain Capital's record, they've done a lot to support businesses, to grow businesses."

He had no interest in grappling with this in his Maddow interview, though, so he filibustered.

What’s happening here really isn’t that complicated. Booker, like many Democrats (especially in the New York/New Jersey area), spent years cultivating Wall Street and the investor class. He was better at it than most, building an enviable network of elite financial supporters by leveraging personal ties (from his Stanford/Yale/Oxford days) and convincing them that he shared their basic worldview.

In the Clinton-era, this was a standard part of the Democratic playbook, but in post-meltdown America, intimate ties to Wall Street can be poisonous inside the party. Booker, who likes to portray himself as a third way/new politics figure, clearly didn’t appreciate this before Sunday. And now, with Democratic activists turning on him, he’s scrambling to put out the fire – without completely contradicting himself or permanently alienating the Wall Street base that will still be crucial to his statewide political aspirations.

The result was his 12-minute display of charismatic evasion last night.

After Booker’s interview last night, I was on MSNBC’s “The Last Word” to talk about it: