Catholic Church: Time for a new war on birth control 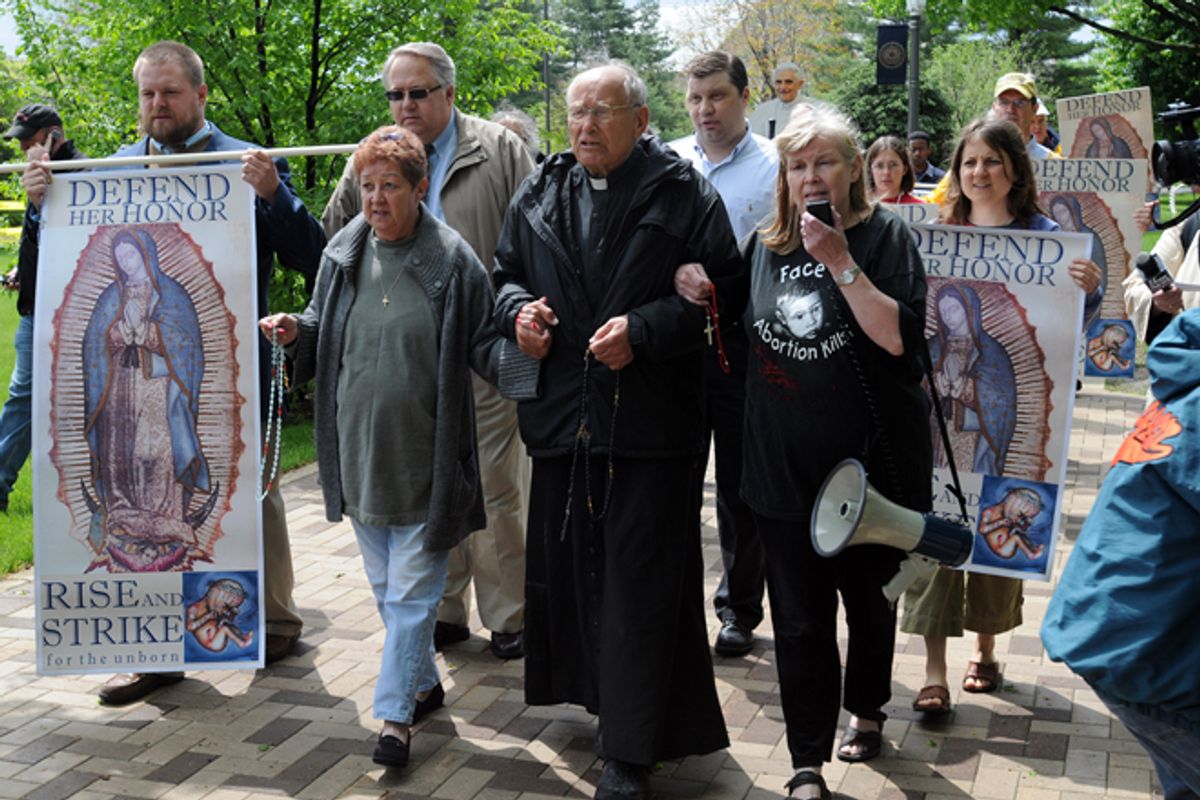 Until Rush Limbaugh called Sandra Fluke a slut, the United States Conference of Catholic Bishops had almost convinced the public that fighting the contraceptive coverage mandate in the Affordable Care Act was about religious freedom. Now, 43 plaintiffs, including 13 dioceses and, most prominently, the University of Notre Dame, would like to bring back the argument that the Obama administration is encroaching on their religious rights.

“This lawsuit is about one of America’s most cherished freedoms: the freedom to practice one’s religion without government interference,” opens the Notre Dame suit, which was filed Monday. “It is not about whether people have a right to abortion-inducing drugs, sterilization and contraception.”

Because the words “abortifacient” or “abortion inducing” sound so scary, the Notre Dame lawsuit makes sure to claim over and over again that, despite a political compromise and executive order specifically exempting abortion coverage from Affordable Care Act provisions, they are being forced to pay for abortion. It claims that “many contraceptives approved by the FDA that qualify under these guidelines cause abortions,” which is false on multiple levels: Even if you believe, as Catholic doctrine does but medical professionals do not, that fertilization, not implantation, constitutes pregnancy, the latest scientific research shows that there’s no evidence that emergency contraception prevents implantation.

Not that they’ve entirely gotten their message straight: Whereas Harvard Law professor Mary Glendon argues in the Wall Street Journal today in defense of the bishops’ position that “if religious providers of education, health care and social services are closed down or forced to become tools of administration policy, the government consolidates a monopoly over those essential services,” the Notre Dame lawsuit suggests that instead of forcing them to cover birth control, the government could just expand Title X clinics that provide birth control to low-income women. The same clinics, by the way, that social conservatives and acquiescent Republicans are trying to either cut funding to or defund altogether.

The lawsuits make a First Amendment free exercise claim, but are aware that they face a standard set by Justice Antonin Scalia in his 1990 majority opinion in Employment Division v. Smith: That the free exercise of religion is not limited by a “neutral law of general applicability” – that is, it applies to everyone. In the Notre Dame suit, the plaintiffs argue that the “U.S. Government Mandate is not a neutral law of general applicability. It offers multiple exemptions … for example, all 'grandfathered' plans are exempted from its requirements.” Of course, that grandfathering is merely a temporal distinction, just like the one-year period that HHS gave religiously affiliated institutions to comply.

Earlier this year, the White House announced a compromise that would allow religiously affiliated institutions that objected to instead have insurance companies directly provide coverage. Notre Dame, as the lawsuit points out, is self-insured, but the administration has said it is seeking to work out an arrangement for such institutions.

The Notre Dame lawsuit also claims that the mandate was “implemented at the behest of individuals and organizations who disagree with certain religious beliefs regarding abortifacients and contraception, and thus it targets religious organizations for disfavored treatment.” Secretary of Health and Human Services Kathleen Sebelius is called out for speaking at a NARAL Pro-Choice America fundraiser. She’s quoted, disparagingly, for saying, “Wouldn’t you think that people who want to reduce the number of abortions would champion the cause of widely available, widely affordable contraceptive services?  Not so much.”

Not every Catholic organization has come out fighting; several dioceses and universities are sitting this one out, and the administration won the initial support of the Catholic Health Association's Sister Carol Keehan with its compromise. (The most recent comment on its website says the CHA is awaiting specifics.) But as Angela Bonavoglia reports in the Nation, this struggle is part of a larger crackdown by the conservative hierarchy against liberal elements within it -- chiefly, women, including nuns.