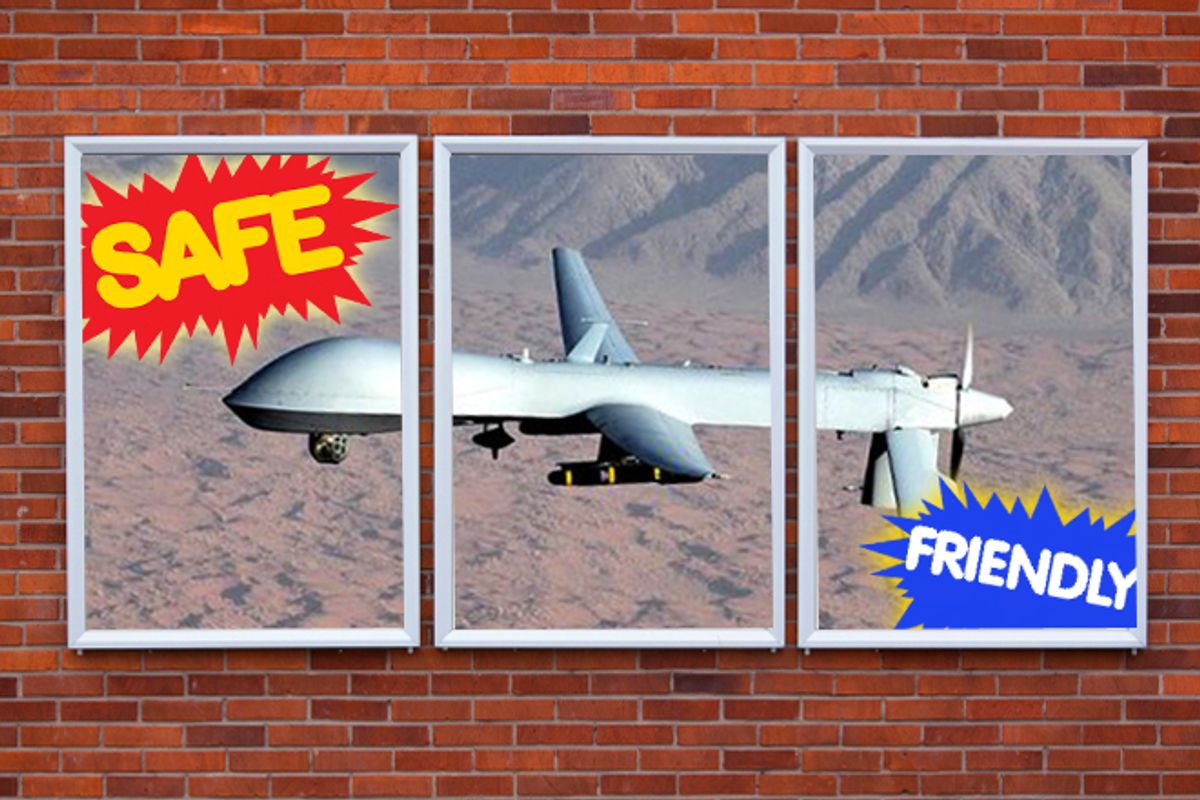 Stung by mounting hostility from the left and right, America's drone industry is fighting back.

"We're going to do a much better job of educating people about unmanned aviation, the good and the bad," said Michael Toscano, president of the Association of Unmanned Vehicle Systems International, the industry's trade group in Washington. "We're working on drafting the right message and how to get it out there."

The P.R. blitz comes after drones suffered a round of negative attention last week. Conservative columnist Charles Krauthammer called for a ban on drones in U.S. airspace, and two other conservative commentators endorsed the idea of shooting down unmanned aircraft flown by U.S. law enforcement agencies. (Opposition to the U.S. government's deployment of unmanned vehicles had previously come from left-liberal groups concerned about civilian casualties in the drone war in Pakistan and potential threats to civil liberties at home.) The nation also witnessed drone "scares": An unidentified flying object nearly collided with a plane over Denver, and rumors circulated of a surveillance drone flying near the NATO summit in Illinois.

After issuing a statement denouncing Krauthammer's remarks as "irresponsible" and "dangerous," Toscano said the AUVSI would go on the offensive against critics. While the strategy is still being shaped, Toscano made it sound like something straight out of a crisis-management textbook -- or Orwell. The AUVSI wants to bombard the American public with positive images and messages about drones in an effort to reverse the growing perception of the aircraft as a threat to privacy and safety.

"You have to keep repeating the good words," Toscano explained. "People who don't know what they're talking about say these are spy planes or killer drones. They're not." He criticized Salon and other news organizations for using the term "drones," saying "remotely piloted vehicles" is more accurate.

He said the AUVSI has hired a public relations firm to develop a media campaign to counter media coverage that he faults for emphasizing "sensationalism and the scare factor." The campaign, which may include newspapers and print advertising, will seek to emphasize the benefits of a "revolutionary technology." The use of unmanned aviation to inspect the damage at the Fukushima nuclear power plant and the BP oil spill in the Gulf of Mexico are the types of story that the media campaign will highlight.

Toscano, formerly the manager of the Pentagon's robotics program, said the campaign will focus on safety and public benefits.

"We need to get people to understand that with UAV [unmanned aviation vehicles] there is always a person in the loop and on the loop [meaning monitoring the aircraft's activities]. These systems don't go in the air without being safe and reliable," he said. (The FAA, however, has not yet issued rules for unmanned aviation systems in U.S. airspace." Before this industry can really take off, we need rules from the FAA on how to safely operate alongside manned aircraft," Toscano told Salon in a separate interview earlier this month.)

Toscano's defense wasn't limited, however, to domestic drone uses. He also stood behind the use of drones in foreign battlefields. "If you want to say we shouldn't be involved in those wars, that's fine. But if our military has already been committed to do this and we are putting men and women in harm's way, I want to do it with the least amount of risk to them. That means using unmanned vehicles. If you did it the old-fashioned way, you would have more risk to our people and more collateral damage."

"Change scares people. There's this natural reaction when you have revolutionary-type change, and that’s what these unmanned systems represent. But they're not as scary as people say. They are an extension of the eyes, ears and hands of a person who knows how to do their job. If you can give them an unmanned system, they will do their job better."

Domestic drones do not pose a new threat to privacy, he said, insisting that existing laws provide sufficient protection.

"We have so many more technologies that are eroding our ideas of privacy. If you have a cellphone and it's on, somebody can follow you. If you send an email, somebody can read that email. The threat of unmanned vehicles is no different than that of helicopters," he said. "If you use an unmanned vehicle to spy on someone and you don't have a search warrant, it's going to be thrown out [of court] or you'll be prosecuted for violating the law."

Toscano acknowledged the downside of the technology, but compared possible negatives about drones to automobiles. "Car crashes kill 35,000 people a year," he said, "but we don't talk about banning cars. We need to be honest about the costs and the benefits."

Toscano said he didn't know how much the media campaign would cost, saying AUVSI members would have to decide how much they want to spend. "This is like motherhood and apple pie for them," he said. "They concur we need to act. We can't stick our heads in the sand."

Medea Benjamin, co-founder of the activist group Code Pink and organizer of last month's drone summit in Washington, said the industry's problem lies in the origins of drone technology in overseas war zones.

"There is a strong association in people's minds with drones and killing, even though the majority are used for surveillance. It's ingrained in people's psychology. The industry is going to have to work hard to distinguish between spying drones, killing drones and humanitarian drones.

"They want to present this as the technology that fights forest fires and finds your lost grandfather who has Alzheimer's, and not as the technology that can be used to read a license plate from 40,000 feet," she said. While not objecting to humanitarian uses of drones, Benjamin said she does hope to foster "a negative image" of unmanned aviation.

"Seeing the militarization of our police forces, there's real reason for concern," she argued. "This technology can be used not only to spy on us but can be used for crowd control and control of protests. It can be used to profile communities -- to spy on Muslims, for example, or on the black community, or on people involved in dissent. It could be used to kill people. If we don’t do something about it, all of those things could happen."

Benjamin welcomed criticism from the right and said she was hoping to make connections with conservatives worried about drones.

"The industry is obviously extremely powerful," Benjamin went on. "They've been able to write the legislation and get their lackeys in Congress to push it through and get the president to sign it. But they are going to have to work harder and harder as we ramp up our efforts to educate the public."

Missy Cummings, a professor of aerospace engineering at Massachusetts Institute of Technology, says the recent controversies about drones mark a new phase in public thinking.

"We've just reached a tipping point and now people are starting to think about and talk about these issues," she said. "That's a good thing."