Euro bonds to the rescue? 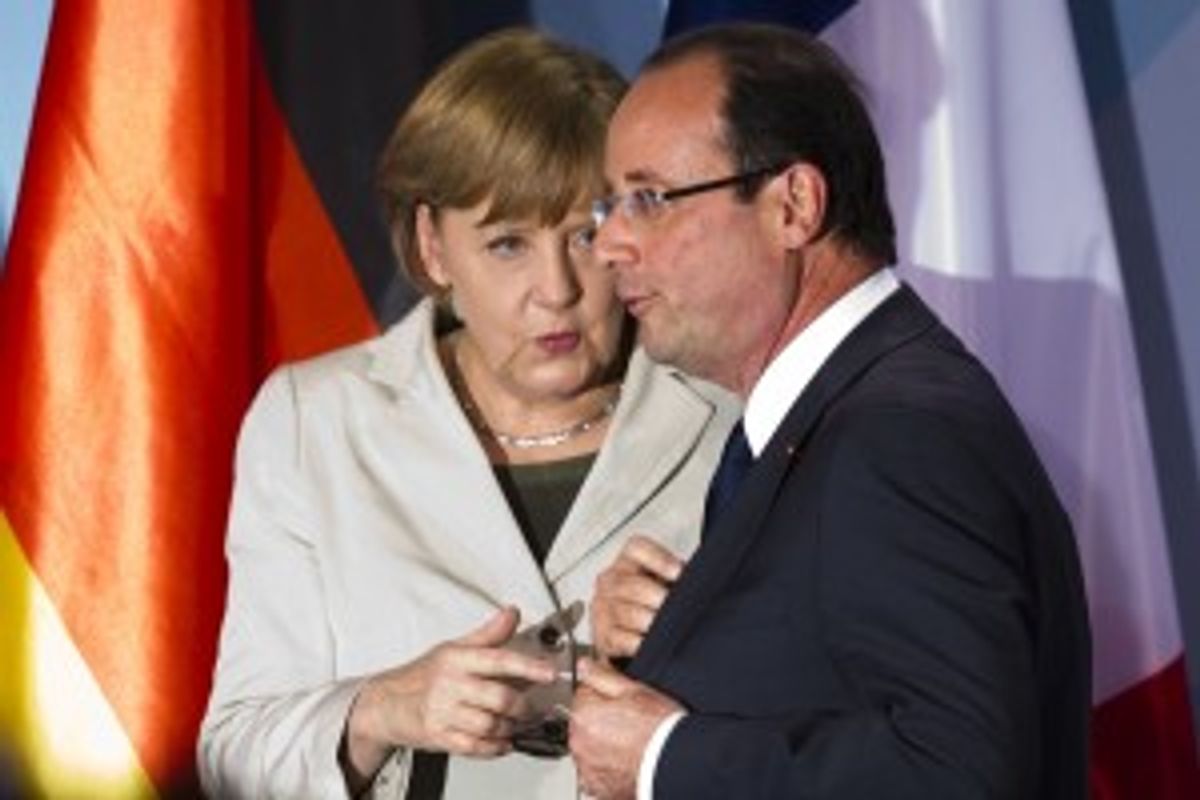 At a euro zone summit on Wednesday, the new French leader plans to revive proposals for bonds that would be jointly issued by euro zone countries to spread national debt burdens across the whole currency bloc.

Hollande knows however that there is little chance the German chancellor will warm to the idea, even faced with the mounting concern that, without drastic action, the euro zone is headed toward a disastrous breakup.

“We spoke about it and both sides confirmed their well-known positions,” said France’s Finance Minister Pierre Moscovici, after meeting with his German counterpart on Monday to prepare the summit.

“Francois Hollande plans to put everything on the table … even those proposals that cannot be agreed immediately,” Moscovici added.

As the euro zone’s strongest economy, Germany knows that euro bonds will mean its taxpayers end up taking on debts incurred by Greece, Spain, Italy and other troubled economies.

That would ease the immediate pain in the southern Europe and the risk of the euro’s early demise. But, critics argue, euro bonds would reward financial sloppiness and relax pressure on the southerners to purse the painful reforms and fiscal discipline needed to get their economies back in shape.

And if the euro bonds didn’t work, paying out for the south could undermine Germany’s financial stability.

“That’s a prescription that comes at the wrong time and carries the wrong side effects,” Germany’s Deputy Finance Minister Steffen Kampeter told Deutschlandfunk radio over the weekend.

He contended that common financing was unlikely to be in place for a decade or more, and certainly would not be decided when Hollande holds his first meeting with other euro zone leaders at Wednesday dinnertime summit in Brussels.

Hollande is expected to get support for euro bonds from the leaders of Spain, Italy and many smaller members of the 17-nation currency bloc, as well as the European Union’s head office which put forward a plan for jointly issued debt last year.

“It would make economic sense to create a deep, liquid and stable market for government bonds with the joint issuance of common debt — euro bonds — at least, once we have reinforced our economic governance further to ensure fiscal prudence,” EU Economics Commissioner Olli Rehn said at a speech in Oxford last week.

Even were the Germans to agree, the legal complexities involved in introducing jointly-issued debt would mean that euro bonds are years away. However, supporters say an agreement to work on their creation could help calm jittery markets and convince voters in Greece and Ireland to support European debt-fighting plans when they go to the polls in the coming weeks.

A “no” vote in Ireland’s May 31 referendum on the new EU fiscal discipline treaty could leave the country cut off from further European rescue funding. However polls show a significant number of voters, disgruntled with the austerity that came as a condition for a 67 billion euro bailout in 2010, are considering rejection.

Greece is holding a fresh election on June 17, six weeks after a nationwide vote produced political stalemate after a surge in support for parties on the far left and far right who oppose austerity measures attached to a 130 billion euro rescue plan.

Polls show most Greeks want to keep the euro, but they are deeply dissatisfied with mainstream politicians and what they view as foreign-imposed hardship.

Although other European leaders have lined up to say they want Greece to stay in the euro zone, the Greeks have been warned that could be impossible if they vote for parties that refuse to implement the bailout conditions.

“There is a choice: you can either vote to stay in the euro, with all the commitments you’ve made, or if you vote another way you’re effectively voting to leave,” British Prime Minister David Cameron told the Greeks Sunday on the sidelines of the NATO summit in Chicago.

Britain is outside the euro zone, but like other world leaders, Cameron is acutely aware of the potentially catastrophic impact a Greek exit could have on the global economy – through the risk it could also force out larger economies such as Spain and Italy, causing the collapse of the euro.

With that in mind, Wednesday’s meeting of euro zone presidents and prime ministers is expected to place new emphasis on pro-growth policies.

Merkel, Hollande and other leaders are working to find common ground on ideas such as frontloading EU funding lines to support job-creation projects in Greece and other hard hit nations, or leveraging up to 60 billion euros in funding from the EU’s investment bank.

The hope is that a more growth-friendly agenda and some signs of compromise from Merkel will produce an “Hollande-effect” on Greek voters, boosting mainstream parties who support the bailout and euro membership.