Interview With My Bully: The bully who asked me out

Caleb insulted my dead boyfriend in front of our entire class. Years later, I learned what he'd really been after 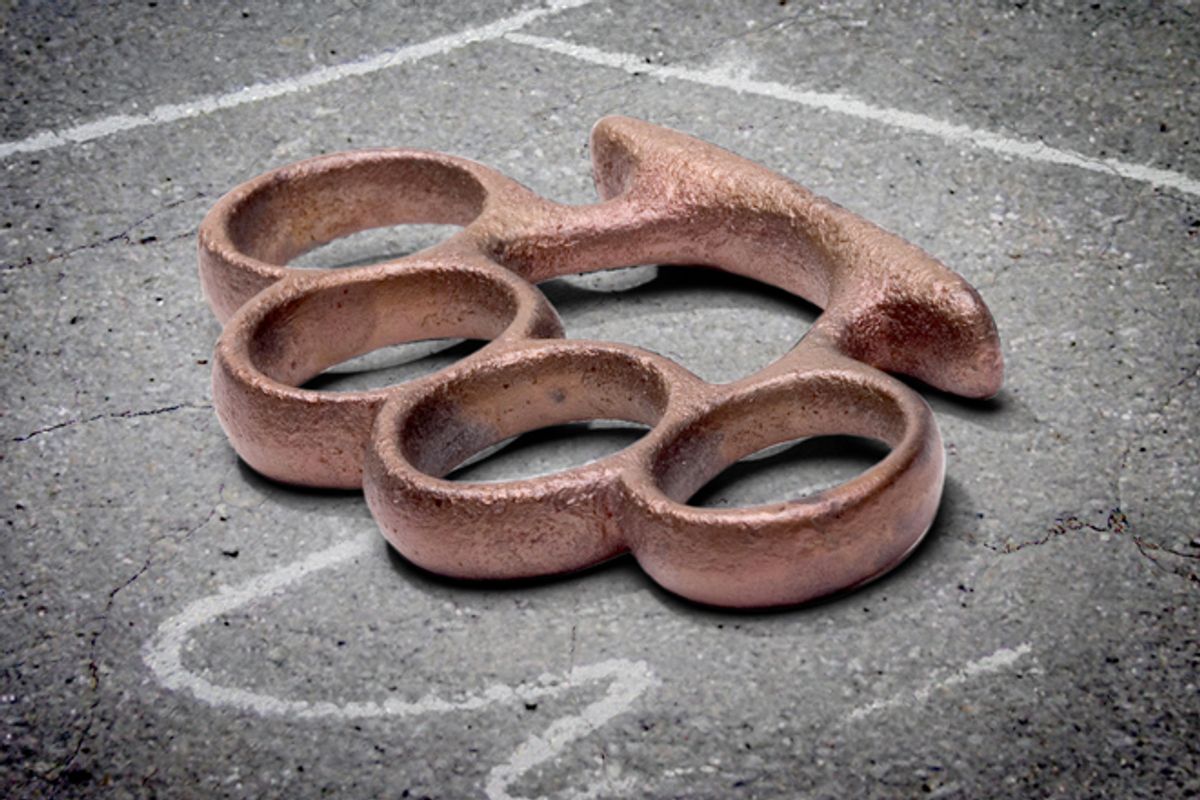 My prep school may have been home to the offspring of politicians, federal judges and national media personalities, but first and foremost we were teenagers. And so in the spring of 1998, my class gathered in the school library to plan our senior prank.

“We should direct all highway traffic into the school parking lot!” somebody suggested.

“Let’s cover everything in Vaseline!” someone else said.

I played along, but I was having a tough time. Eight months before, my boyfriend Ben had been killed in a car accident. He’d been different from the other guys: almost preternaturally kind and, like me, overly intellectual. On the way to our junior prom, we’d sat in the limo discussing “The Great Gatsby.”

I knew Ben would have loved the senior prank a friend and I proposed -- a series of odd, unexpected happenings throughout the day, like hiding alarm clocks in the ceiling panels, and switching teachers’ desks. But I’d barely started my presentation when Caleb Grossman (not his real name) cut me off.

“Jenny’s idea is stupid,” he announced to the class, some of whom began to snicker.

Caleb was Ben’s perfect foil, at least in my literature-obsessed brain. Both boys were brilliant, but Caleb was as cruel as Ben was virtuous. In English class, Caleb made frequent and obscene references to the nature of my relationship with our teacher. He criticized me during discussions. And I’d often catch him watching me with a malicious look that seemed to say: You’d better watch out, little girl.

“My prank is called the Plague of ’98,” Caleb continued. “We’re going to buy 10,000 grasshoppers and release them in the school.”

Pathetically, our high school mascot was the grasshopper.

“And how are we supposed to pay for 10,000 grasshoppers?” somebody asked.

“That’s easy,” Caleb said, then looked straight at me. “We’ll use the money from Ben’s memorial fund.”

I don’t remember how I removed myself from the front of the room. But the second I made it to safety, I started sobbing. I couldn’t stop. I cried through my free period, skipped my physics class, and was finally given permission to leave school early.

Before I left, a teacher made Caleb stand face-to-face with me in the school lobby.

“Sorry about what I said.” Caleb’s face was impassive. He might as well have been talking to a wall.

“OK,” I said, and walked away. But it was not OK. I felt furious. I felt bullied.

Of course, it’s not easy to define bullying. Look at the controversy over recent revelations about Mitt Romney’s high school behavior. What might be school-age antics to one person is violent assault to another.

So did Caleb’s treatment toward me constitute actual bullying? Even at the time, I feared I was overreacting. But as an adult, I can see that his aggressive, leering behavior in the classroom was a subtle kind of sexual harassment, and his outrageous comment about a boyfriend I was still mourning – a blow delivered in front of 120 classmates -- felt like the culmination of a long, systematic campaign to wound the parts of my identity that mattered most.

Caleb and I didn’t speak after that debacle. Graduation came and went. I left for college, then moved to New York and became a journalist. I began writing a novel inspired by Ben’s death, and as I wrote, I thought about Caleb. Neither he nor I were the social crème de la crème of our school. We were both outcasts of a certain kind. In another world, we would have been united against more popular forces, not against each other. But instead, we were nemeses. Underdog fighting underdog became a central theme in my book.

As it turned out, Caleb had been thinking about me, too. A few years later, I received the following email:

Hi Jenny: This is Caleb -- you may remember me, we went to school together for about ten years. I believe we may have played Orpheus and Persephone in Sue Jagger's fourth grade production of the Orphic Tragedy. I have my own condo in Foggy Bottom and a job in the city, (where) I will be working for the immediate future. I also have my own car. Anyway, I hope everything is going well and look forward to hearing back from you soon! Caleb

The first thing I thought was: Of course I remember you. You made fun of my dead boyfriend in front of the entire senior class. The second thing was: I did not play Persephone in Sue Jagger’s fourth grade.

I read the note over and over, wondering why Caleb’s email sounded like he was proposing marriage in 16th-century Europe. “I have a fantastic job in the mud-pie-makers guild and can offer you five ducks and one cow,” it seemed to say.

But I couldn’t help myself: I wrote back immediately. I had to see what this was all about.

As it turns out, Caleb wanted to take me on a date. This seemed like a practical joke — a long-delayed maraschino cherry of meanness to drop on me, as if his mission hadn’t been completed. But my curiosity was too great. I said yes.

The day before our date, I received a lengthy, apologetic email from Caleb.

Jenny: I am embarrassed to say I was unable to get a prime time table at any of my favorite places -- for instance Eric Ripert's WestEnd Bistro. However, I have made alternative reservations for 8:30 at a few very viable locations.

Caleb proceeded to list restaurants and the qualifications of each, as if he were some Chamber of Commerce lackey: At Sabores, he wrote, “the dishes are scrumptious thanks to the mastery of Executive Chef Daniel Amaya. The atmosphere is hip and vibrant YET subdued and lounge-like.” At Matisse, he told me, “one of Washington's foremost wine experts has combined the culinary and visual arts to complete an ambiance of dining bliss.” And finally, the email concluded, “A cheesy but perennial default favorite: Benihana. I have gotten a big kick out of the sense of community + belonging I get from dining with others (I come from a broken home).”

Talk about bizarre. The Caleb who was apparently trying to date me was so wildly different than the villain I’d created in my mind. He seemed less mean than awkward. Almost childlike.

My best friend from high school sent me a message: “Jenny, this is way too weird. will you call me before you go and when you get home?”

I went to meet Caleb, fully prepared to be stood up. I had chosen the “hip and vibrant YET subdued and lounge-like” Sabores, and picked a table in a well-lit part of the restaurant. Caleb arrived and proceeded to order us a ridiculous amount of food and ply me with drinks. I told him I was driving and had one cocktail. We had a stilted conversation over dinner, but I barely had the brain space to listen to him. I just kept wondering: What am I doing here? Does Caleb even remember what he said to me senior year? I didn’t bring it up, and neither did he. Instead, he flattered me incessantly, and I became so uncomfortable that I left early. I arrived home to find the following email:

Jenny: Thank you again for meeting me for dinner tonight. Seeing how as I had a crush on you since like fourth grade, it was sort of a dream come true! You have grown up to be a truly impressive woman and I hope we can stay in touch! Caleb

And there it was. An explanation.

All this time I thought he was a bully, but he was really a misguided kid, with an inability to read social cues.

When I was in the second grade and a boy made fun of me one day, my teacher said he was only doing it because he had a crush. Later, in fourth grade, it was Ben who had a crush on me, one that took me years to reciprocate, a fact about which I still harbored tremendous guilt.

Now, I felt like Caleb was attempting to shove himself into Ben’s role. He offered a hot-air balloon ride, a dinner cruise and, ironically, a pilgrimage to F. Scott Fitzgerald’s grave. But I didn’t want Caleb, a substitute for the boy I’d lost. I thought about all the experiences Ben and I had never shared, and I felt guilty all over again. I’d been so slow to see Ben for who he was, to figure out how good he would be in my life.

In the end, Caleb made a kind of confession — an acknowledgment that we’d been wrong about each other. In an email, he wrote:

With regard to the fourth grade Orphic Tragedy, I realize now that it was Rebecca Marshall -- not you -- who played Persephone to my Orpheus. I guess the mind (heart?) has a way of rewriting the past as it wishes it were!

I felt for Caleb. I understood his compulsion to strive after something he wanted so badly but would never have, because I felt the same way. But I also knew that the past couldn’t be rewritten or even revised. The last line of “The Great Gatsby” describes the current carrying ships ceaselessly into the past, but I wouldn’t let Caleb drag me back into those old struggles and adolescent longings.

I was forging ahead.

Jennifer Miller's debut novel, "The Year of the Gadfly," is out now from Houghton Mifflin Harcourt.