A birther upset in Arizona? 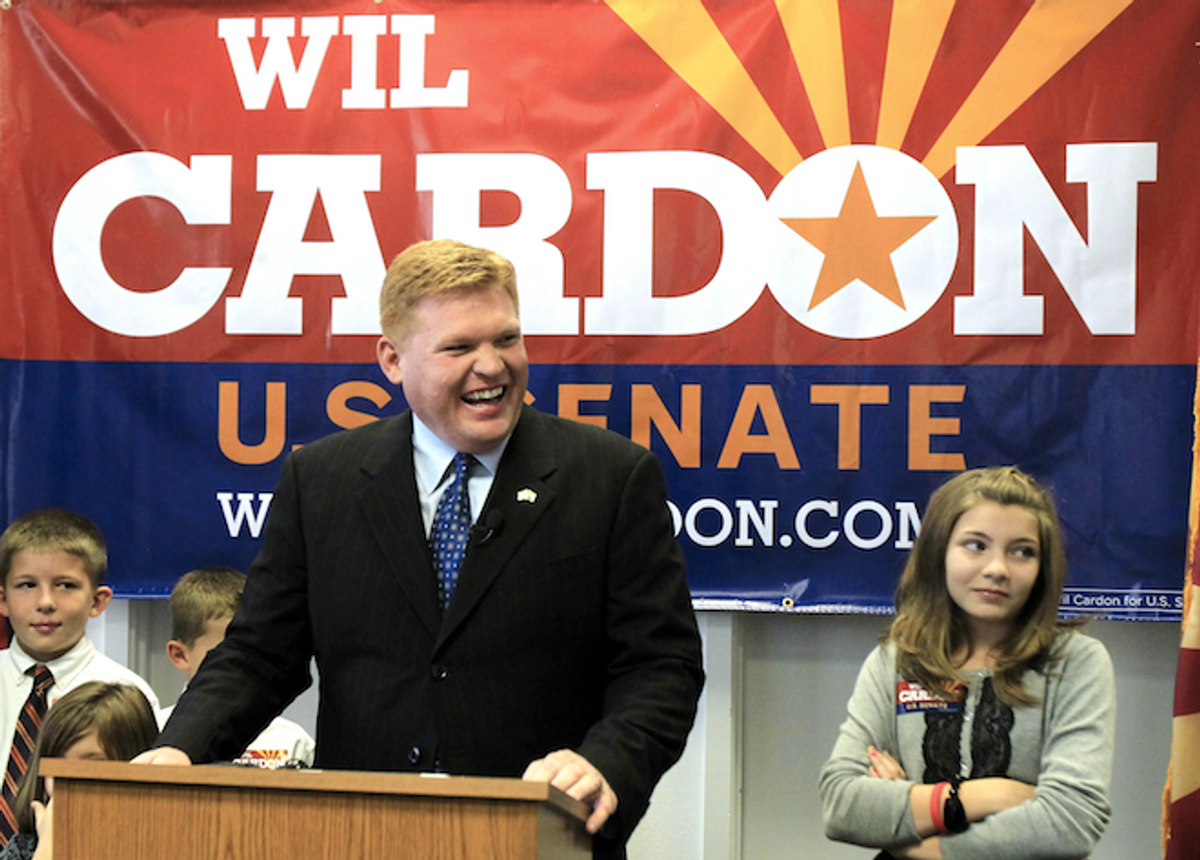 Questioning President Obama’s birthplace is cool again among Republican office holders and seekers, despite official poo-pooing from the GOP establishment. And nowhere is it more in vogue than in Arizona, where a birther is giving the GOP’s favorite candidate an unexpected run for his money in the U.S. Senate race.

U.S. Rep. Jeff Flake has everything going for him in his bid for a promotion to the Senate: Tons of money, six high-profile terms on Capitol Hill, and the backing of many Republican leaders, including the seat’s current holder, Sen. Jon Kyl, the Senate’s No. 2  Republican, who is retiring this year. He's also supported by Arizona favorite son John McCain.

Flake was supposed to sail through the GOP primary without lifting a finger, after which he would go on to to crush Democrat Richard Carmona, a former Army officer and former U.S. surgeon general, in the still right-leaning state.

But a new PPP poll out yesterday may have some Republicans worried, as Flake’s Republican opponent Wil Cardon has hacked 27 points off of Flake's lead in just three months. Flake is still comfortably ahead by 22 points, but it’s nothing compared to the nearly 50-point lead he had back in February.

In Cardon, Flake is facing a surprisingly tough challenge from not only a political neophyte who has never held public office before, but a birther. When the Arizona Republic asked Cardon whether he believes Obama has sufficiently proven his citizenship, Cardon wouldn’t say, responding only, "I think people who run for office … ought to prove that they meet those qualifications.”

The poll shows Cardon’s rise has to do with his growing name recognition in the state. And while an early round of advertising certainly helped, it's likely nothing helped as much to raise Cardon’s profile as his birther-curious comments a month ago, which captured national headlines and introduced Cardon to many people for the first time.

And Arizona, more than any other state, has been leading the charge against Obama’s birth certificate. The state legislature has advanced a Donald Trump-backed “birther bill” every spring since the president took office, which would require presidential candidates to present a long-form birth certificate before they can appear on the ballot. An Arizona State University poll from earlier this month found 60 percent of Arizonans support the bill.

Gov. Jan Brewer vetoed 2011’s version, which passed the state Senate 20 to 9 and the House 40 to 16, specifically objecting to a provision asking candidates to provide “circumcision certificates,” but it was reintroduced last month thanks to its popularity.

Just last week, Arizona’s Secretary of State Ken Bennett -- who is a state co-chairman of Mitt Romney’s presidential campaign -- formally requested the state of Hawaii provide proof that Obama’s birth certificate is indeed valid, explaining to a local radio station,"I'm not a birther. I believe the president was born in Hawaii -- or at least I hope he was.”

But perhaps no one has done as much to advance the birther cause as Maricopa County Sheriff Joe Arpaio, who, it was revealed yesterday, used taxpayer dollars to send a deputy to Hawaii to investigate Obama’s birth certificate.

While it’s tempting to look at Cardon’s rise in the paradigm of the insurgent Tea Partier against the establishment-backed GOP, Flake is a favorite of the far-right grassroots movement, securing the endorsement of kingmaker Sen. Jim DeMint (R-S.C.) and several Tea Party groups.

Nonetheless, Cardon’s surge could trouble some Republicans still smarting from back-to-back upsets in Indiana and Nebraska, where insurgents Richard Mourdock and Deb Fischer defeated candidates favored by the GOP establishment and even DeMint, respectively.

Flake, however, has been clear that he believes Obama is indeed a U.S. citizen, much to the chagrin of birthers. And while it’s difficult to say with certainty if Cardon can credit his flirtation with birtherism for his rise in the polls, there’s been a startling uptick in the number of Republicans questioning Obama’s citizenship as the 2012 elections have ramped up.

North Carolina alone has seen a handful of GOP congressional candidates railing against Obama’s “poorly reproduced forgery” of a birth certificate, while even some GOP leaders such as Rep. Cliff Stearns (R-Fla.), who has led the charge against Solyndra and Planned Parenthood, have waded into the birther myth. Meanwhile, a PPP poll from March found that more than a third of GOP primary voters in Tennessee, Georgia and Ohio do not believe Obama was born in Hawaii.

How else to read this third wave of the birther myth but that it sells among many GOP voters?