Spending has grown more slowly under Obama than either Reagan or Bush. Will the media stop parroting the GOP? 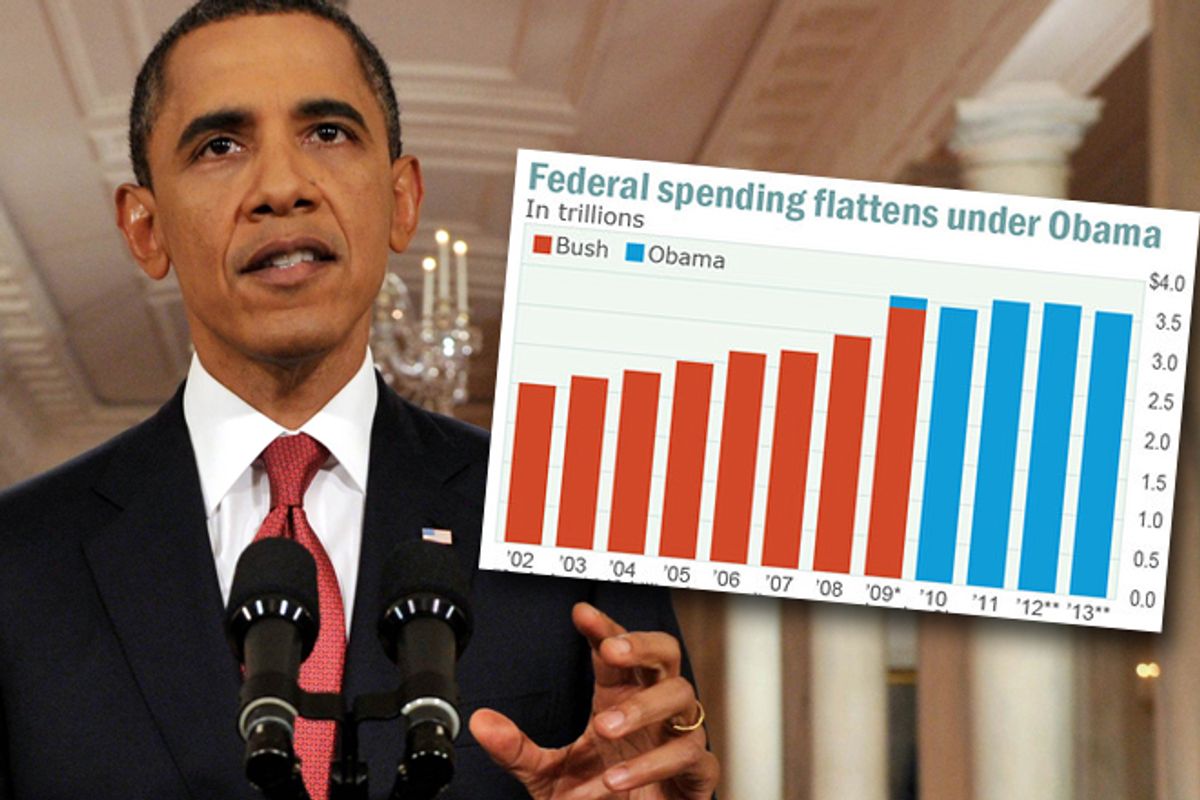 Updated with video below.

With so many Republican lies about President Obama, it's pretty hard to pick out the worst one. The most vicious stuff, of course, comes from the crazy birthers, who won't go away. (Way to spend Arizona's tax dollars, Sheriff Joe Arpaio!) Then there are the more mainstream slurs – Newt Gingrich calling him "the food stamp president," or Obama's "friend" Sen. Tom Coburn saying he favors government programs because "as an African American male," he received “tremendous advantage from a lot of these programs.”

But if you measure the power of a lie by its utter truthlessness combined with the breadth of its reach, the notion that Obama has presided over a wild federal spending spree is probably the biggest whopper spread by the GOP, with the help of the right-wing noise machine and lazy mainstream media. Mitt Romney regularly rails against the "debt and spending inferno" the president supposedly ignited. Last month on Fox, Charles Krauthammer called Obama's spending "radical, unprecedented," and CBS Radio's Mark Knoller reported that the "National debt has increased more under Obama than under Bush."

On Tuesday, the Wall Street Journal's Marketwatch debunked all of those claims: "Although there was a big stimulus bill under Obama, federal spending is rising at the slowest pace since Dwight Eisenhower brought the Korean War to an end in the 1950s," writes Rex Nutting. "Even hapless Herbert Hoover managed to increase spending more than Obama has." In his first term, Obama will have increased spending by 1.4 percent; in his last three years, George W. Bush increased annual spending by an average of 8.1 percent – and in Bush's last fiscal year, 2009, spending jumped 17.9 percent. Republican deity Ronald Reagan increased spending an average of 8.7 percent in his first term. Nutting continues:

After adjusting for inflation, spending under Obama is falling at a 1.4 percent annual pace — the first decline in real spending since the early 1970s, when Richard Nixon was retreating from the quagmire in Vietnam.

Strangely, Marketwatch frames Nutting's article as "commentary," I guess because he's an opinion columnist, but his facts and figures come straight from the non-partisan Office of Management and Budget and Congressional Budget Office. The charts he uses are vivid and leave no room for doubt: When the president says he's dropped spending to its lowest levels since the Eisenhower presidency – back before the Civil Rights Act, the Occupational Safety and Health Act, the Clean Water Act, the Economic Opportunity Act, or the establishment of the Environmental Protection Agency or Department of Education -- he's telling the truth.

Mild-mannered White House press secretary Jay Carney was nearly moved to swearing on Wednesday, pointing to the facts outlined by Nutting and telling reporters "don't buy into GOP B.S." (That became a leading Politico headline later in the day.) But will the media heed Carney's warning?

We'll see. Somehow I doubt it. I discussed where the "big spender" lie fits into the pantheon of GOP falsehoods on MSNBC's "Hardball" with David Corn: