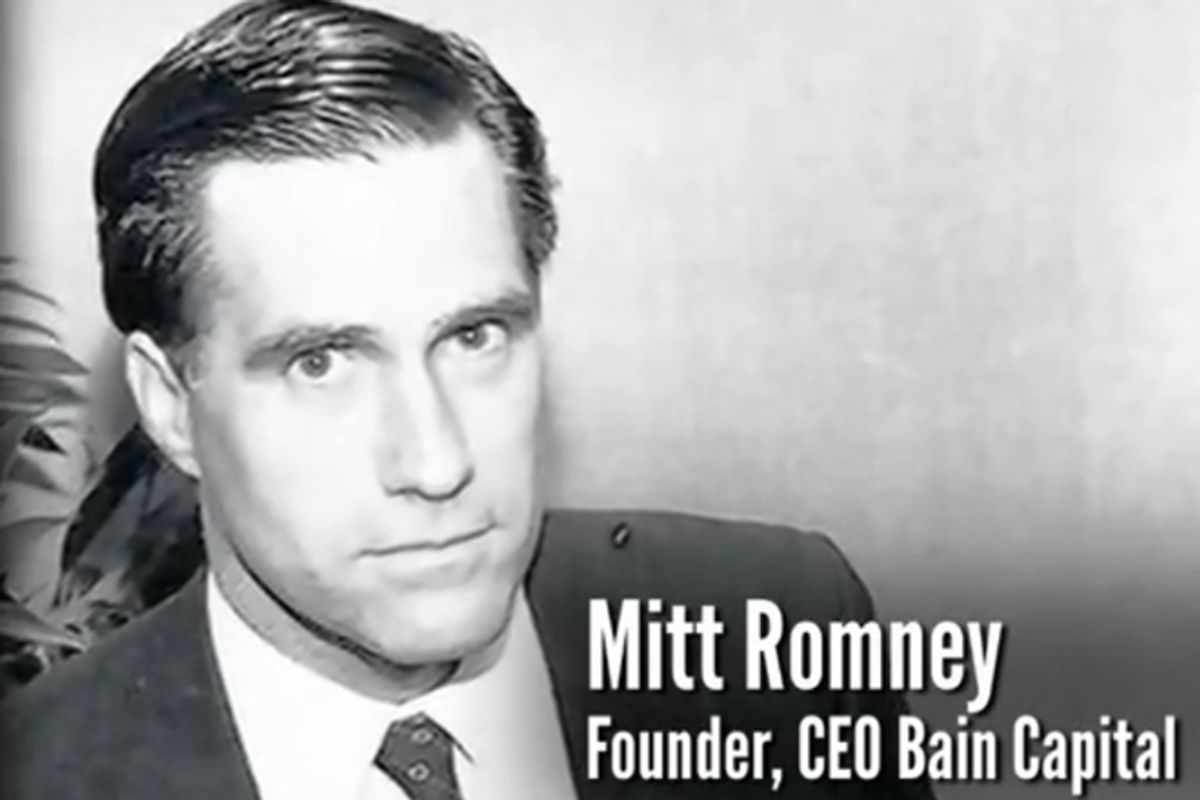 "They made as much money off it as they could, and they closed (the plant) down and filed for bankruptcy without any concern for the families or the communities." -- Joe Soptik, laid off steelworker, in a new ad supporting President Obama's re-election.

Regardless of whether the Obama campaign's attack ad on Bain Capital is 100-percent accurate, its overarching message -- and that of similar ads -- is crystal clear. As embodied by Joe Soptik's quote, the basic argument is that Mitt Romney is a particularly bad guy for laying off workers, ruining communities and making bank as a private equity magnate at Bain Capital.

But while Romney's bragging about his time allegedly creating jobs certainly makes the Obama assault fair, it doesn't make that assault constructive. Yes, it might help win Obama a few votes in a single election, and it might be a reasonable way to figure out whether Romney really has created jobs, but it subtly forwards a destructive fallacy about the root of America's economic crisis: Namely, that the problem stems from a few especially evil individuals like Romney, not from an entire system that both Romney and Obama support.

The history of this system is well-known. Thanks to a campaign finance system that allows for a legal form of bribery, our laws have been sculpted to permit private equity firms to make a handsome profit from buying up honest businesses, loading them up with debt and dumping them into bankruptcy -- all while hurting workers by raiding their pensions, slashing their benefits and laying many of them off. And even using the word "permit" doesn't reveal the whole truth because those laws don't just allow private equity firms to do this, they essentially require such cutthroat moves if making them is the best way to maximize profits for a private equity firm's shareholders. (Yes, executives can be successfully sued for taking actions that are not solely in the interest of maximizing profits.)

This is a bipartisan parable -- as much the story of Gordon Gekko as it is of Mitt Romney, Democratic Sen. Michael Bennet and many of President Obama's top donors and economic advisers. Indeed, the reason ambitious Democratic hacks like Newark Mayor Cory Booker and congressman-turned-financial-exec Harold Ford have been quick to criticize the Obama campaign ads against Bain Capital is both because they understand who finances Democrats' election campaigns and because they understand the Democratic Party has often been just as supportive of Gordon Gekko capitalism as the Republicans and Mitt Romney.

Considering his agenda, Obama's analysis of the economic crisis is certainly a bit more progressive (and rational) than Romney's. While Romney wants to repeal the weak regulations in the Dodd-Frank legislation, Obama supported that bill. Meanwhile, Fortune notes that Obama's corporate tax reform proposals would reduce the taxpayer-financed incentives for some of private equity firms' worst behavior, and it would also end the loophole (that Romney personally took advantage of) allowing private equity managers to avoid higher income taxes.

But, as he's vacuumed up cash from Wall Street, Obama has lately backed off even some of these modest initiatives, underscoring the harrowing truth: When it comes to the way our economy is designed, the differences between Romney and Obama are a matter of degree, not an overarching vision for the future. Like most power players in their respective parties, both presidential candidates behold a disproportionately financialized economy and say that's all well and good. Sure, they may disagree on how to tweak that financialized system, and yes, at least Vice President Joe Biden is willing to rhetorically decry "an economy that is based on the financialization of every product." But policy-wise, the two sides generally agree that the financialized system is to be protected rather than reconstructed. In Obama’s own words this week, they both believe that financial firms are “set up to maximize profits, and that's a healthy part of the free market." Or, in Joe Soptik's words, they both believe that private equity sharks have every right to make "as much money" as they can without "any concern for the families or the communities" affected.

To appreciate this truism is to briefly ponder the policy proposals that would actually take Biden's words seriously and genuinely challenge the financialization of the economy. For instance, with a different set of laws on the books, America could better protect worker pensions from the classic private equity raid, or we could make sure that banks aren't playing the financial casino with depositors' money by mandating a separation between the bank and the casino floor. Alternately, we could use anti-trust statutes and taxpayer leverage at the Federal Reserve to downsize and break up the big banks, or at least to reduce the outsized bailout-supported salaries that entice our best and brightest to Wall Street and away from industries that actually create value. Hell, we could even start using government power to revoke corporate charters and shut down firms that repeatedly violate the law (that is, the corporate "death penalty").

Yet, as pragmatic as they are, most of these ideas have been so marginalized by both parties that to even discuss them is to run the risk of being labeled a socialist -- or worse. And so we are left with a presidential election contest that deliberately distracts from any conversation of systemic problems or systemic solutions and instead manufactures a straw man argument on the narrowest of terms.

In lieu of any real debate between competing economic visions, this isn't even a fight over the smaller-but-still-significant issue of whether financial industry experience should qualify someone to hold public office. Save for Biden’s off-the-cuff comments yesterday, the Obama campaign hasn’t raised that much-needed question about Romney, likely for fear of offending the Democratic Party’s Wall Street donor base, insulting various financial industry-rooted politicians in the party, and looking hypocritical in light of the president’s decision to appoint mini Mitt Romneys to top positions in his administration. Instead, the Obama campaign asks us to believe that only one private equity guy was too evil and too greedy a bastard to now be qualified to serve in the White House -- and further asks us to believe that while Romney is disqualifyingly evil, all the Romney clones around Obama are "good and decent" people working to save America.

As the election nears, many rank-and-file Democratic voters will no doubt wholeheartedly agree with this line, cheering on the president and his surrogates as they eviscerate Romney's record at Bain. Unnoticed in all the hyper-partisan ball spiking, though, is the fact that the left side of the two-party monster is now implicitly suggesting that had Romney been nicer and less greedy, he might be a great candidate for the highest office in the land. Indeed, the whole Democratic message ignores the fact that under the laws of the existing economic system, it was Romney's fiduciary responsibility to a) be greedy on behalf of his firm's investors and b) show no "concern for the families or the communities" he was destroying.

That doesn't mean we should sympathize with Romney or absolve him of his actions, but it does mean that we are being deceived by omission -- one that's deliberate. The Obama campaign is trying to convince millions of self-described liberals to consider themselves principled social-justice crusaders for change when they support Obama, even as such support echoes a status-quo-defending campaign message. In the process, that message buries the real questions that need to be asked of both parties -- questions about our economic structure that the bipartisan political establishment wants to suppress in order to preserve its power.