Gingrich Inc: Out of business

Newt stayed in the race too long -- and now even his old private companies are struggling. Will Romney rescue him? 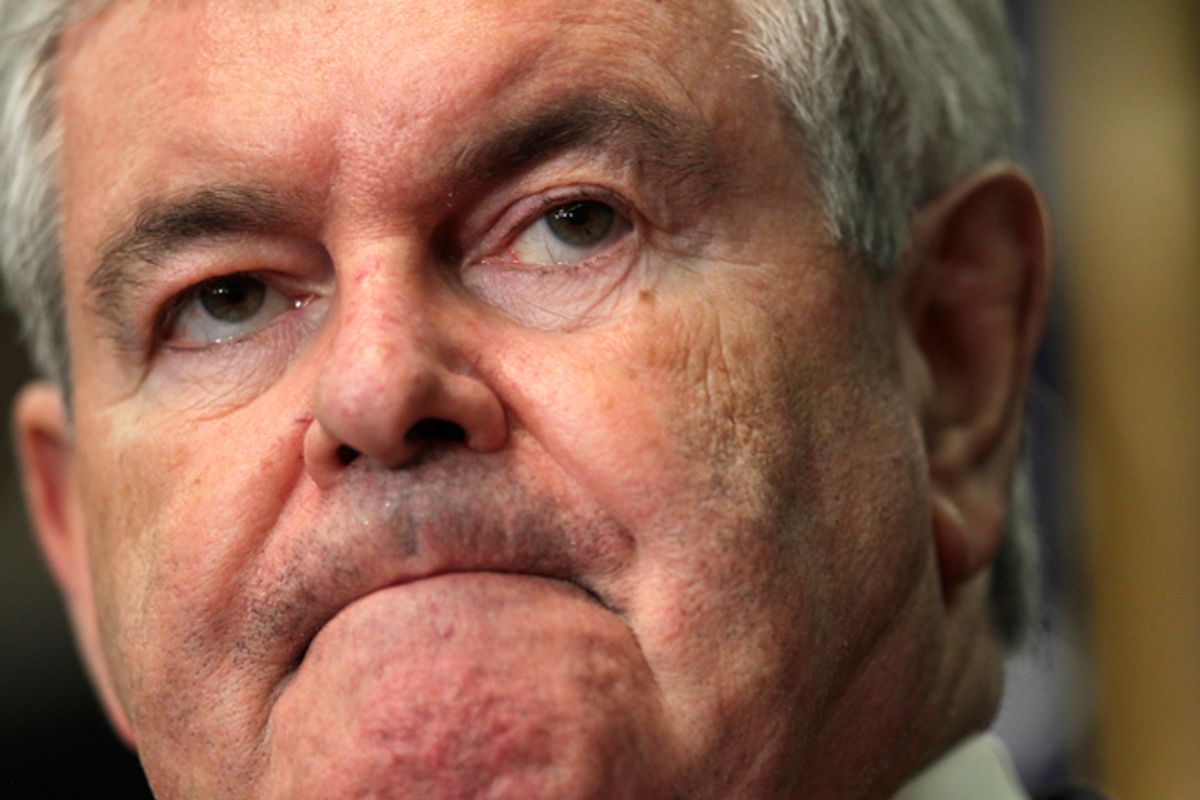 When the House of Representatives censured Newt Gingrich in 1997 for ethics violations -- the first time ever for a sitting Speaker in 200 years -- the vote was 395 to 28, with 196 Republicans joining. "Newt has done some things that have embarrassed House Republicans and embarrassed the House," said then-Rep. Peter Hoekstra, R-Mich., who is now running for a Senate seat in Michigan. Gingrich resigned a year later, “in disgrace,” as Mitt Romney said in January.

Gingrich spent the next decade in the wilderness, but in a near-miraculous twist of the classic American redemption story, Gingrich’s quixotic bid for the presidency this year actually succeeded, for a time. For a few brief moments, he actually led the pack and felt confident enough to declare on national TV, “I’m going to be the nominee.” Of course, it all came crashing down eventually, as Gingrich’s rise was more a product of the comic weakness of the GOP field and its real front-runner than Gingrich’s strengths, but he still vastly outperformed all expectations and managed to redeem a badly-tarnished reputation.

But Gingrich just couldn’t help himself, and he stayed in the race long past his sell-by date, scuttling his once-in-a-lifetime shot at reclaiming his political career and, we now learn, potentially destroying his financial well-being.

Before he entered the race last year, Newt Gingrich headed a small empire of business and nonprofits that made more than a $110 million over the past decade. But Reuters reports today that the companies may vanish, along with Gingrich’s political career, because they are facing bankruptcies and debt.

Gingrich left the companies and sold his ownership stakes when he ran for the presidency, which may have pushed the already struggling companies over the edge. The biggest was the Center for Health Transformation, Gingrich's healthcare consultancy, which advocated for an individual mandate much like Obamacare's, though he later disavowed that.

CHT declared bankruptcy last month, citing declining membership. "Newt was the attraction,” said Steve Hanser, one of the people to whom Gingrich sold the company. He had "a big, magnetic personality, especially in the board room," and membership went down when he left, Hanser said.

Gingrich may never see most of the $6.4 million he sold his stake for in 2011, as he was to be paid out in increments over a long period of time. And despite the lucrative companies, Gingrich was never extraordinarily wealthy -- his six-figure debt at Tiffany became an early campaign issue -- and he’s now also facing nearly $5 million in campaign debt left over from his presidential bid, campaign finance reports released this week show.

So, he’s done the only thing he can do and hitched his ride to Romney, who helped former GOP candidate Tim Pawlenty pay off his outstanding campaign debt. It must be humiliating for Gingrich, whose huge pride seems matched only by his hatred of Mitt Romney during the primary, to have to sycophantically campaign for the presumed nominee and apologize for all of his previous attacks.

One can’t help but think this all could have been avoided if Gingrich had just bowed out sometime in February, when he could have left with his head held high, his reputation miraculously redeemed, and in a position to influence whoever emerged as the nominee. He certainly wouldn’t have as much campaign debt, and he may have been able to save his companies. Instead, he stayed long past the bitter end, after reporters had stopped bothering to cover him and the Secret Service had refused to provide him with protection.

Rick Santorum, who also left Congress under a cloud and managed to salvage his reputation this year, seems to offer the alternative. Santorum has gone from a joke with the Google problem who lost his Senate seat by one of the largest margins in recent memories to a early front-runner for the 2016 presidential race, given Republicans’ habit of nominating the person who came in second last time.