After sitting on the sidelines, the national Democratic Party is finally aiding the effort to recall Scott Walker 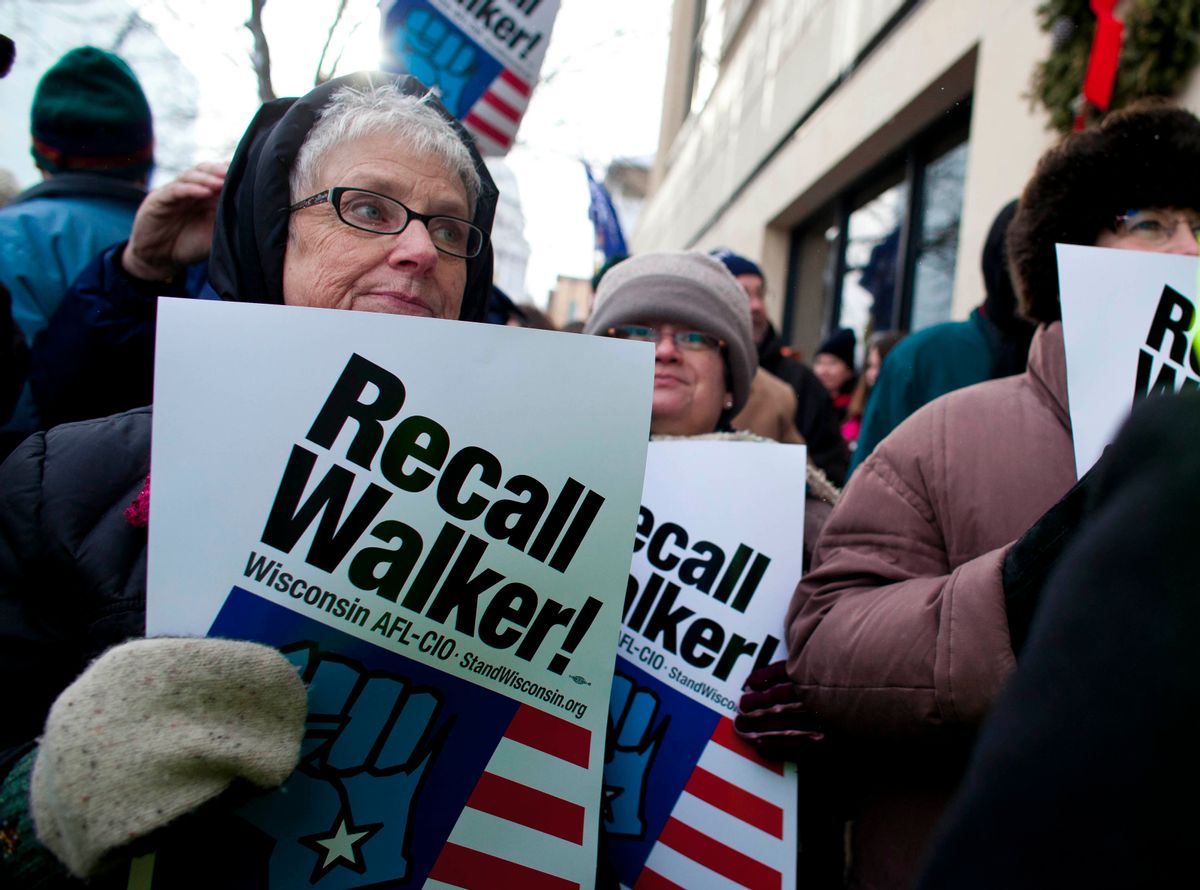 Supporters show up in support before a truck with the boxes containing about one million signed recall petitions forms in Madison, Wisconsin January, 17, 2012. (Reuters/Darren Hauck)
--

With less than two weeks to go until the recall election of Wisconsin Gov. Scott Walker, national Democrats may finally be taking seriously the race that has become the biggest national flashpoint ahead of the November general elections.

Despite the election’s high visibility, national Democrats had not invested heavily in the race, reportedly upsetting some local Democrats and labor activists who felt hung out to dry after building a movement to gather nearly a million signatures to oust Walker. And while Republicans have poured money and star power into the state, national Dems have gotten a slower start, thanks in part to a Democratic primary that divided labor and party support between two candidates.

But now, the Democratic Governors Association just dropped another $1 million in the race -- bringing its total investment to $3 million, more than it's ever spent in a Wisconsin general -- and the DNC is getting directly involved, after sitting on the sidelines.

Last night, DNC Chairwoman Rep. Debbie Wasserman Schultz, D-Fla., sent a fundraising email to millions of activists nationally, urging them to support Milwaukee Mayor Tom Barrett, Walker’s Democratic challenger, and calling the election “one of the most important” in the nation. Money raised from the email will go directly to Wisconsin Democrats, and not the national party.

The DNC has already directed $1.4 million to Wisconsin so far this election cycle and Wasserman Schultz will host a fundraiser for Barrett in coming days. DNC spokeswoman Melanie Roussell said the national committee is “fully committed to helping Mayor Barrett win next month’s recall election,” adding that the party will deploy its network of activists and volunteers, and make available its online resources to help Barrett’s ground game. The party plans to be a “key player,” she added.

The Obama campaign has also pitched in with phone banks and canvassing operations, but the president has not visited the state. Obama Campaign spokesperson Ben Finkenbinder told Salon that “Obama for America has been working hand-in-glove with the mayor’s campaign” since he won the Democratic primary, when Obama issued a statement supporting the candidate. “We’re going to continue to work with the campaign to figure out how we can be most helpful in the closing days,” Finkenbinder added.

"[We] are all in as to whatever we need to do," RNC chairman Reince Priebus told the Milwaukee Journal Sentinel. Indeed, Walker has a huge fund advantage over Barrett, thanks to generous support for out-of-state donors and super PACs. The Republican Governor’s Association just launched its seventh TV ad attacking Barrett yesterday.

The timing of the DNC’s stepped-up effort come as the Barrett campaign is touting a new internal poll, which claims the Democrat is narrowing the gap with Walker. A string of recent polls show Walker ahead by at least 5, and the conventional wisdom has him winning, but Barrett’s poll claims he is down just 2 points, 50-48 percent.