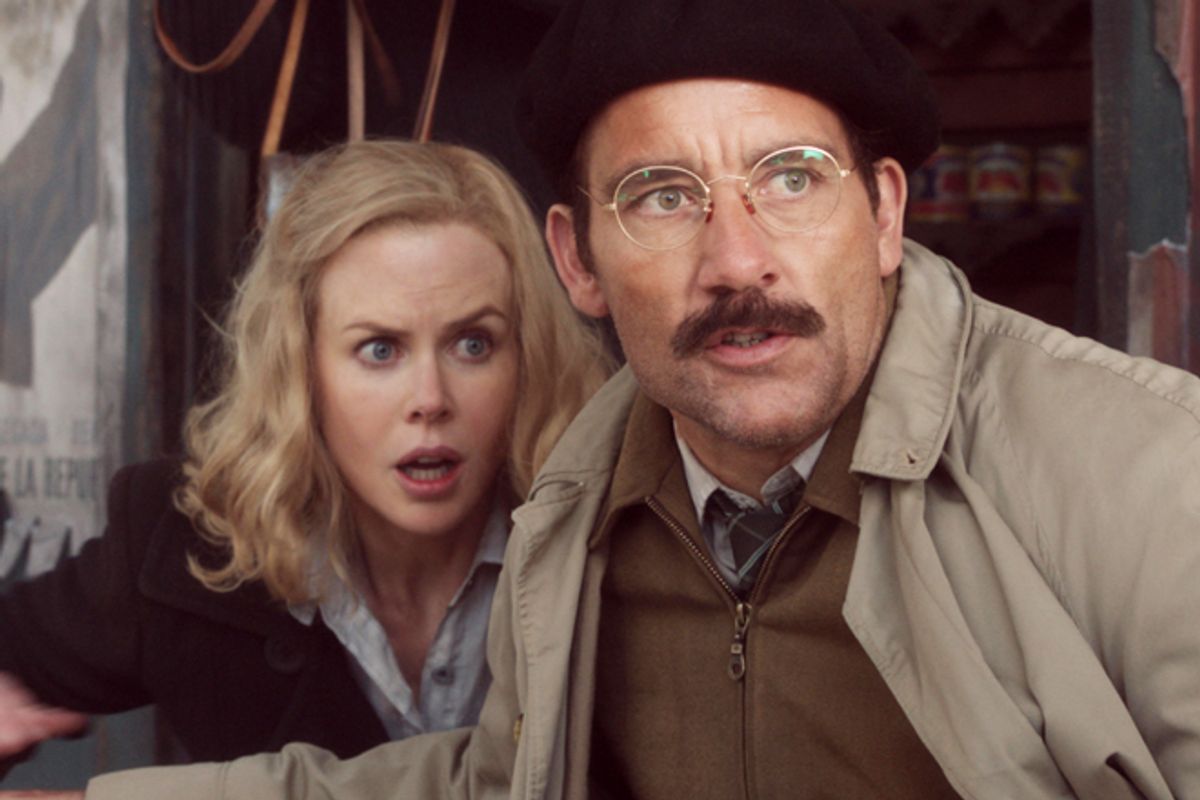 Here’s something you should consider doing before watching HBO’s inadvertent comedy “Hemingway & Gellhorn,” a disastrous two-and-a-half-hour CliffsNotes on the passionate, dysfunctional love affair between Ernest Hemingway (Clive Owen) and his third wife, the war correspondent Martha Gellhorn (Nicole Kidman), which airs Monday night. Find some Hemingway — take it off the shelf, download it to a Kindle, load a page of “The Sun Also Rises” onto your computer via Google books — and leave it within arm’s reach. You are going to want to read from it at fairly regular intervals to remind yourself that though he may have been a drunk, a brute and a womanizer, Ernest Hemingway was not a complete and total idiot. And then you can also use it to shield your eyes from the movie’s myriad crimes against sepia, its extensive use of what appear to be Instagram photo effects, the hot pink blood, Metallica’s Lars Ulrich in a beret, and the scene toward the end of the film in which Kidman’s face is superimposed over real footage of emaciated bodies at Auschwitz and Dachau.

Hemingway and Gellhorn met in Florida in 1936, when she was 28 and he was 37, already famous and married to his second wife. The two covered the Spanish Civil War together, then lived with each other for a few years, married in 1940 and were divorced by 1945. Despite the fact that Gellhorn covered every major conflict between the Spanish Civil War and Vietnam, she is best known as Ernest Hemingway’s third wife, a designation she bridled at both in real life and in the film. “Hemingway & Gellhorn” purports to rectify this. She, not Hemingway, is the movie's protagonist and narrator. It begins on a close-up of Kidman, in old-age makeup — she looks good wearing all those wrinkles she's fought so tirelessly to erase — speaking to a documentary crew in a smoky, deep contralto about her life. But though the film pays lip service to making Gellhorn more than, as she put it, “a footnote to someone else’s life,” it chooses to do so by focusing only on the period of time in which … she was that footnote. With friends like these, better they not be filmmakers.

At least Gellhorn does not come across quite as badly as Hemingway, who brays and screams and generally behaves like an overgrown child. When we first see him, he is drinking, smoking and cackling maniacally while reeling in a marlin, the Not That Old Man and the Hunter S. Thompson Outtake. It gets more Gonzo from there, as in when he and Robert Duvall, playing a USSR general, clench a red scarf between their teeth and threaten to play Russian roulette before Tony Shaloub calms them down with vodka.

Clive Owen has been stripped of all sex appeal — future directors take heed: Wire frames and a mustache are Clive Owen’s sexual kryptonite — despite having lots of sex. (I can imagine Corey Stoll's incredibly dashing Hemingway, from last year's "Midnight in Paris," pointing at this version of Hem and cackling.) As for his writing, though he is occasionally seen standing up, typing away, and floating his pages into the trash, of the two lines of writing we hear, one is plagiarized from an earlier conversation and the other is “If a man can stand he can fight” -- the sort of stereotypical stinker of a Hemingway line that makes people hate Hemingway.

But the disaster of "Hemingway & Gellhorn" isn't on Owen, who gives this silliness his all, or Kidman, who devotes herself and even, occasionally makes it work. In almost every instance, the script and direction settle for the simplest, dullest explanation of its main characters' behavior, even when that's in direct contradiction of something mentioned earlier. (Philip Kaufman, who in an earlier life made "The Unbearable Lightness of Being," is the director here, and he keeps insisting on inserting Kidman and Owen into real historical footage like he's Forrest Gump with access to iMovie.)  In the very first scene, the older Gellhorn narrates that she never liked sex, a comment she made in real life as well. But every time she and Hemingway bang in this movie — in one endless sequence, they screw while actual bombs are going off on the street outside — she seems as into it as the most gifted porn star.

In this movie, when Gellhorn saddles up to Hemingway at a bar in Key West, all sass and ass, it can't be because he cuts such a dashing figure — after all, he’s drunk, covered in blood, and a dead ringer for Groucho Marx — but because he’s Ernest-effing-Hemingway. Martha Gellhorn was a major, ballsy, charismatic operator, a woman driven and brave enough to crash a boys club and go to war, time and time again, but the movie ignores all the hundreds of spiky, complicated, difficult, even selfish reasons that a person as interesting, intense and ambitious as Gellhorn might want to be with someone of Hemingway's stature. (When Gellhorn insists on leaving Hem to go cover the end of WWII, Hemingway cheats on her. In real life, Gellhorn cheated too, but that detail didn't make the cut.) Instead, Gellhorn loves Hemingway, but she can not shirk her duty to bear witness to world events. Hemingway loves Gellhorn, but he needs to be the center of attention.

At the end of the movie, the documentarian asks an older Gellhorn about her relationship with Hemingway, and she bristles. The man has been dead for nearly 40 years, she's moved past him, and she's lived a plenty interesting life on her own terms, she says. Then the crew leaves and she goes directly to her desk to read a letter from Hem, because, whatever the movie pretends, it doesn’t believe her.