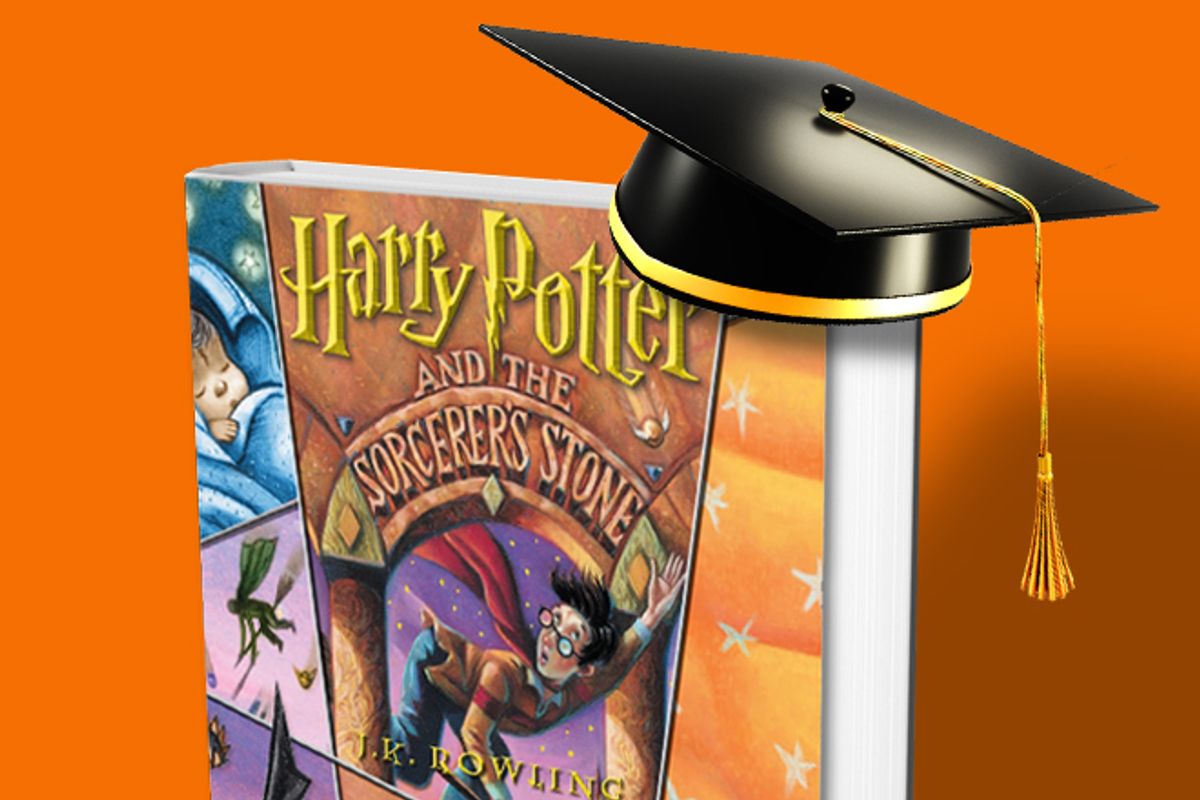 Last week in Scotland, 60 scholars gathered over two days for the U.K.'s first scholarly conference on the Harry Potter series. The Guardian newspaper quoted John Mullan, a professor of English at University College London, questioning the wisdom of organizing such an event. Concluding that the host college, the University of St. Andrews, was primarily after "publicity," Mullan suggested the attendees would be better off forgetting kids' books and cultivating their gravitas. "They should be reading Milton and 'Tristram Shandy,'" he told the Guardian. "That's what they're paid to do."

The criticism brought to mind a lengthy discussion on Reddit last year, inspired by an anecdote from a bookstore clerk who sold copies of all four "Twilight" novels to a sheepish professor. The professor's explanation: "Every time I reference low forms of literature, I always use 'Twilight' as the example. Today a student asked if I’ve actually read them, and I had to say no. They demanded that I do."

What should literary academics study? To judge by the Reddit comments, many people believe that academia's job is to ordain great literature and pass on its exalted benefits to students. As for bad literature, the more calumny that can be heaped on it and those who love it, the better! Much of the discussion devolved into knee-jerk "Twilight" bashing by users as unfamiliar with the books as that sheepish professor. (Many of them give the impression of cherishing equally bad taste, albeit for forms of pop culture that are much less girly.) Extravagant evocations of steaming piles of bodily waste abounded.

Nevertheless, a few readers agreed with the professor's students: If you're going to knock something, then set a good example by knowing what you're talking about. You don't want to give students the idea that it's OK to opine on a book they haven't read, for crying out loud. And, toward the end, a few informed participants even stepped in to speak out on behalf of the study of not-very-good books -- provided those books are a cultural phenomenon, which "Twilight" most certainly is. "Something doesn't have to be high-brow literature to be a worthwhile material for study," wrote one. "That's not to say it's a 'great book', but for academic literature, whether or not something is 'great' is sort of beside the point." "I think a lot of people assume English Ph.D.'s just go around saying 'This book is good, this book is bad,' all day," wrote another. "That is an incredibly misguided understanding of the study of literature."

It is. However, Mullan's argument isn't that the Harry Potter series is bad (he says his kids love the books), only that it isn't serious enough to reward scholarly attention. "Harry Potter is for children," he said, "not for grown-ups." True, the Harry Potter books are technically "for" kids, but by now everybody knows that adults read them, too (including adults without children), and that some people who first read them as kids have since grown up and yet still regard them as important books. Can the Harry Potter novels, as novels, be detached from the momentous role they played culturally, socially and in the world of book publishing? Does it even make sense to try?

"Twilight," which I suspect will have an even greater impact on America's book culture because of the fan networks it has inspired, is doubly damned as unserious because it's not only "for children" (that is, teenagers), but it's also a romance, surely the most reflexively disdained of all literary genres. Throughout the early 19th century, all novels were seen in more or less this light: as fanciful stories read by silly women seeking escape from sterner truths, women all too prone to absorbing dangerously misguided notions of life and love. (For the record, I tend to agree with the later opinion, but that doesn't mean I think "Wuthering Heights" beneath scholar interest.) As recently as the 1930s, it was controversial for any novel at all to be assigned to students at Oxford. Novels were regarded as recreational reading, not matter for significant study.

In the late 20th century, however, the field of cultural studies, a discipline springing out of poststructuralist theory, seized upon everything from Madonna to "Buffy, the Vampire Slayer" as fodder for academic work. Often, through some tortuously elaborate theoretical rationale, the fun stuff of pop entertainment could be cast as "subversive" or even revolutionary, tantamount to a form of political activism, which was something of an ivory-tower fetish at the time. That's not to say that Madonna and Buffy didn't have their subversive elements, but unlike actual political activity, those elements could be easily ignored by audience members who didn't care to hear about them. Pop culture is funny that way.

Cultural studies has since fallen out of fashion a bit, and it doesn't seem to have left much of an impression on the public, who at best dismissed it as fad. (Maybe they were right about that.) Still, there's much to be said for smart people paying real attention to the stories that captivate huge numbers of people. First, there's the simple question of why? Why was a boarding school series about wizards in training exactly what every kid wanted to read in the late 1990s? Why do so many girls and women like vampire romances?

Then there's how. Was it just chance that elevated Stephenie Meyer's vampire romance above the rest of the genre, or was there something particularly effective in how she executed it? What role has the Internet played in fostering fandoms that not only persuade more people to read a book, but perhaps influence their opinion of it as well? If anything, an obviously "bad" book presents an even more fascinating puzzle to solve. Sometimes the answer is historical. The fictional techniques Dan Brown utilizes in "The Da Vinci Code" are so basic and formulaic they can be found in about a zillion other thrillers, but his bestseller's tale of power, secrets, conspiracy and religion clearly spoke to a lot of discontented readers in the Bush years.

It's also worth asking whether critics of the Harry Potter conference would object to a conference on "Alice in Wonderland" or "The Adventures of Tom Sawyer," both books written explicitly for children. Somehow, the passage of a century or more makes them seem weightier, just as it has turned the ladies' entertainments of Jane Austen's time into the literature of today. Who's to say the same won't happen to J.K. Rowling's creation, or even to Meyers? If so, there won't be any lack of contemporary sources to explain how we saw them, the way we argued over the quality of their prose and the examples they set for young men and women. But as for how they'll look to those readers, sitting down to study whichever "classics" will survive and be read 100 or more years in the future? That is anybody's guess, and anybody should be entitled to take a shot at it.

The Guardian newspaper on the U.K.'s first academic conference on Harry Potter

A Canadian bookseller sells "Twilight" novels to a sheepish professor