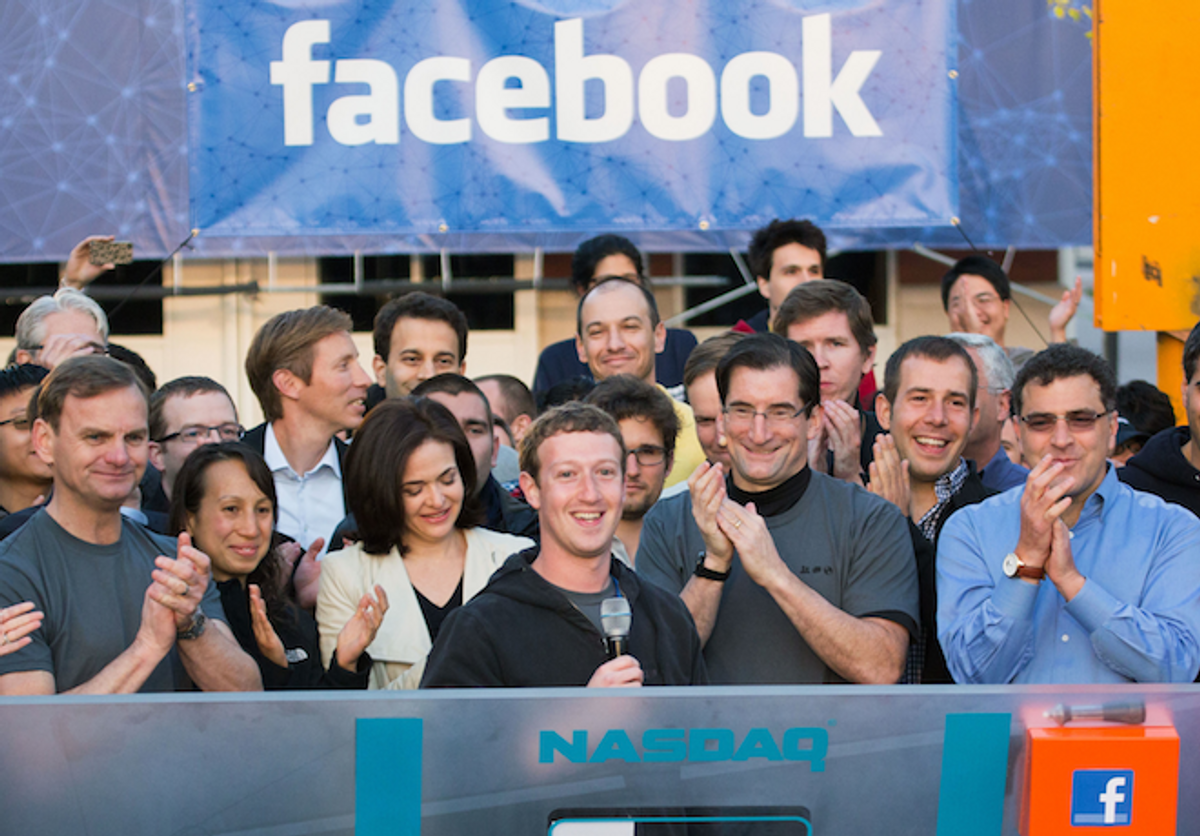 A funny thing happened on the way to the Facebook IPO. The clash of competing economic ideologies at play in the 2012 presidential campaign got a lot more complicated.

With our first-ever private equity honcho running for president in an era of high unemployment and slow economic growth, it was always a foregone conclusion that this year's election campaign would include an appraisal of whether Mitt Romney's version of capitalism is good for America. It's a debate the culture has been passionately engaged in at least as far back as Oliver Stone's "Wall Street," and the battle lines are well-drawn. Is Bain Capital a parasitic corporate raider or an engine for lean-and-mean capitalist renewal? You get to make the call, and then you can go vote.

Facebook's botched IPO adds a new wrinkle. In contrast to Bain-style private equity wheeling-and-dealing, the Silicon Valley venture capital model for new firm creation has always enjoyed a much more positive public relations profile. Maybe it's a West Coast vs. East Coast thing, but conjuring up the likes of Intel or Apple or Google from thin air is a lot more sexy than swooping down on a troubled firm, brutally slashing costs and stripping assets, and then reselling for a huge profit a few years down the line.

But the Facebook mess, with all the questions it raises about insider trading, and the clear abuse of small investors in favor of the big boys, reminds us that everybody's got their warts and nobody should get a free pass. Facebook's early venture capitalist investors and the big investment bank clients that got preferential access to new, and negative, information about Facebook's future profits, were able to cash out while the little guy was left holding the bag. Sifting through the aftermath, it's hard to avoid the conclusion that a lot of people got ripped off. And coming right in the middle of all the back and forth about the merits of private equity, Facebook's IPO raises a provocative question: Just how is it that capitalism, East Coast or West Coast style, currently serves the interests of the American people?

Because here's the thing: Over the past 40 years, the venture capital and private equity buyout industries have grown dramatically, from basically nothing to becoming crucial drivers of corporate formation and growth. Last year, venture capital firms invested $32 billion in new start-ups in the U.S. while private equity funds raised over $100 billion for buyout activity. All along the way, government policy lavished both sectors with extraordinarily lenient tax policy -- including massive cuts in the capital gains tax and the so-called carried interest rule that allows Mitt Romney to fork over only 14 percent of his income to the IRS -- which has allowed financiers of every stripe to vastly increase their individual wealth. But over that same period, income inequality has grown and the average worker's wages have stagnated, while the cost of healthcare and education has skyrocketed.

Facebook's IPO and Bain Capital's track record end up telling us exactly the same thing. State-of-the-art American capitalism works very efficiently for the 1 percent, and leaves just crumbs for the rest of us. Efficiency is good for them, but not for us. That's quite the achievement.

"Forty years ago," David Brooks proclaimed in a New York Times column earlier this week, "corporate America was bloated, sluggish and losing ground to competitors in Japan and beyond. But then something astonishing happened. Financiers, private equity firms and bare-knuckled corporate executives initiated a series of reforms and transformations."

The specific purpose of Brooks' column was to defend Bain Capital, Mitt Romney and private equity in general from demonization by Obama. But we can also throw venture capital into his "reform and transformation" pot. After all, strictly speaking, venture capital is a subset of the larger category of "private equity." (Nothing's "public" until the IPO.)

In pragmatic terms, there's a key difference. What we typically call private equity generally involves a group of investors (i.e., Bain Capital) who borrow money to purchase an already-existing company -- what's known as the "leveraged buyout" -- while venture capital typically focuses on investing non-borrowed cash for the purpose of creating or nurturing a new enterprise. The distinction is important, but we'll come back to that later. For now, let's assume that David Brooks is correct: 40 years ago, American businesses had forgotten how to compete, but today they're much more fearsome operators. And let's share the credit between private equity, headquartered in New York, slicing-and-dicing its way through old fogies, and venture capital, headquartered in Silicon Valley, relentlessly spawning new giants to stride the earth.

Again, the Silicon Valley venture capital model has always gotten better press (with the possible exception of the height of dot-com bubble insanity). The reason is obvious. It's much easier to make the case that there are clear economic benefits to the country as a whole when new firms are being born and jobs are being created. It's a lot more difficult to make the same argument about private equity, since it is very often the case that one of the ways in which the new owners "streamline" operations and make things more "efficient" is to cut costs by firing workers. To successfully defend the idea that private equity serves the interests of the general good, you have to fall back on hard-to-quantify things like the theory that weeding out the poor performers "frees up" productive forces to find better uses in the larger economy. That's a hotly debated topic, and if you're looking for a direct rejoinder to the assertions made in support of private equity by David Brooks, go read Josh Kosman's new Rolling Stone Op-Ed "Why Private Equity Firms Like Bain Really Are the Worst of Capitalism." Suffice to say, the story is not as slam dunk as Brooks would have us believe.

But never mind that. For our purposes here, it's more interesting to focus on how the venture capital model and private equity models are similar -- in the sense that the manner in which both types of investors encourage corporations to operate more efficiently and profitably can be argued to work against the interests of American workers. This is a critical point, because what have we gained from American corporations becoming less bloated over the last 40 years, if, at the same time, the fabric of our society has deteriorated and our upward mobility has become more limited?

I first really began to understand the extent to which Silicon Valley was no longer the vaunted job creation engine it had long been held up to be seven years ago when I visited the Santa Clara offices of PortalPlayer, a microchip designer riding high on Apple's decision to use its premier product as the brains of the iPod. PortalPlayer was a state-of-the-art Silicon Valley venture-backed play. A significant portion of chip design and software development was outsourced to a fully owned subsidiary in Hyderabad, India. The chips themselves were manufactured in Taiwan. Less than half the company's employees were located in the United States.

The visit was eye-opening. From a venture capital investment standpoint, PortalPlayer's business model was an ultra-efficient application of resources. Indian coders were cheaper, and the time difference between Santa Clara and Hyderabad meant that PortalPlayer could develop software around the clock. Likewise, it made no sense for a small independent chip designer to fabricate its own hardware. But from an American software developer's perspective or that of a prospective employee at a chip manufacturing plant, PortalPlayer's model was discouraging: It clearly implied tough wage competition and fewer hiring opportunities. Repeat this model a few hundred, or a few thousand, times, and you start seriously hollowing out the United States semiconductor design and manufacturing capacity. Good for the V.C. investors, not so great for the country.

Facebook doesn't fit as neatly into the the offshoring/outsourcing screw-the-American-worker model as do so many of today's new technology start-ups or a Bain Capital outsourcing company. But the details of how the IPO was bungled illustrate another important way in which the wealthy benefit far more from how modern financial markets work than the general public. The emerging story of how top investment bank clients were told directly that Facebook had adjusted its revenue projections downward due to trouble selling ads on cellphones is evidence of a broken system. It calls to mind the string of dot-com frauds brought to market in the late '90s that had no revenue at all or even the barest rudiment of a sane business plan, but still ended up delivering millions to the early V.C. investors before the newly public companies went bankrupt. For a few years, sure, there was a lot of job creation -- but then everyone was laid off. Similarly, with Facebook, the earliest V.C. investors, the Greylocks and Accel Ventures, were able to cash out long before the clouds started to darken. Where Facebook is headed now is not their problem.

The private equity model of capitalism results in eerily similar outcomes for workers. One of the ways in which the new private equity owners of a firm streamline costs is through "business process outsourcing" -- a bloodless phrase that means, in practice, hiring cheaper workers (either domestically or abroad) on a contract basis to perform tasks previously kept in house. Call center support operations move to the Philippines or Bangalore. Manufacturing goes to China. Et cetera.

All of these measures clearly succeed in cutting costs in the short run, which is important, because the new owners have added a lot of debt to the company's bottom-line that needs to be paid off. But they're not the same as making investments in the future. It's not analogous to pouring money into research and development or taking risks developing new markets. Short-term "efficiency" is easy to maximize at the expense of long-term growth but it's a very open question as to whether the benefits of that efficiency are broadly shared.

Facebook's IPO reminds us that even the most high-profile venture capital plays are often rigged in favor of the big investor -- something that we should never have forgotten after dot-com boom became bust. But enraging as the behavior of investment bankers and Facebook executives might be, those run-of-the-mill shenanigans obscure a deeper problem. Whether the engine is powered by private equity or venture capital, we've created a machine that generates wealth for the few, while actually exerting downward pressure on the many. And that's not something we're likely to hear much about from either presidential campaign.