What makes Mitt tick? The nominee says he likes politics because "I can't compete in competitive sports very well" 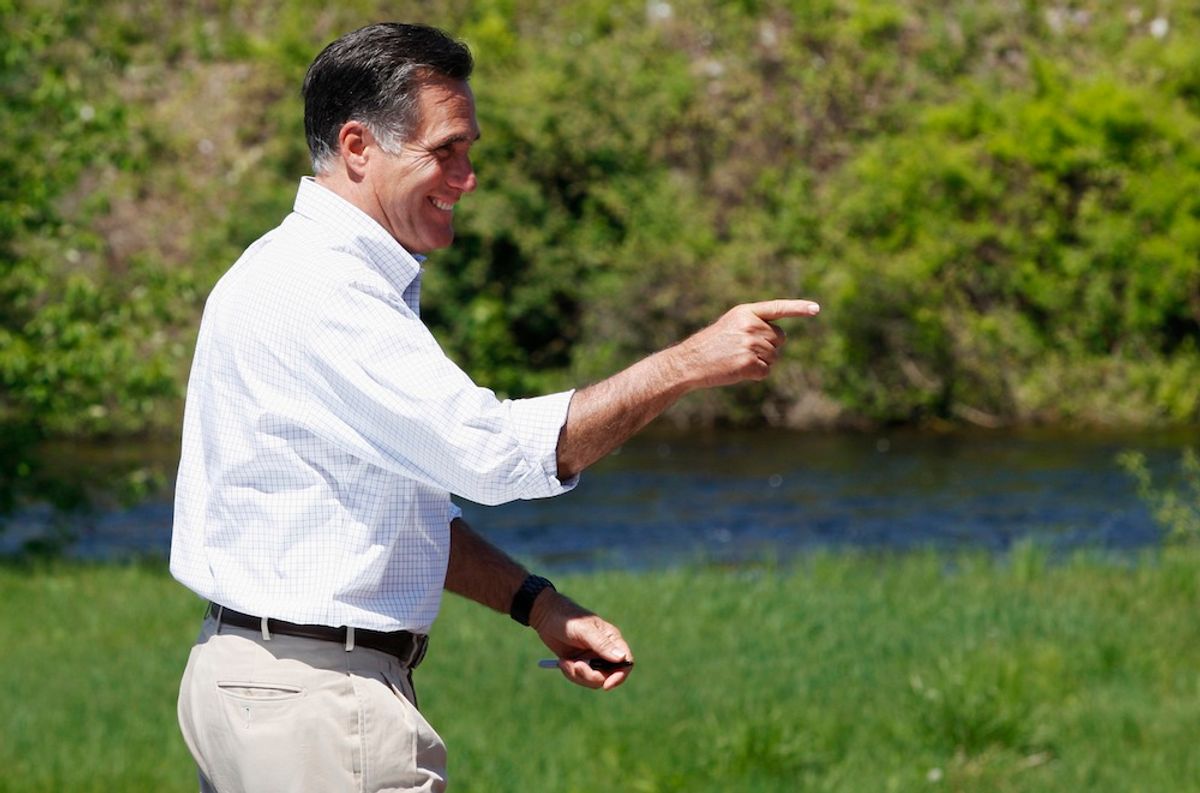 Mitt Romney may have unintentionally opened a window onto his somewhat obscured motivations for running for president in an interview with the Wall Street Journal’s Peggy Noonan today, explaining that he likes sports, but isn’t very good at them, so he does politics instead.

Asked about whether he likes “the game” of politics, the presumed GOP nominee replied, "I like competition, and I think the game [of politics] is like a sport for old guys. I mean, you know, I can't compete in competitive sports very well, but I can compete in politics, and there's the -- what was the old ABC 'Wide World of Sports' slogan? 'The thrill of victory and the agony of defeat.' The only difference is victory is still a thrill, but I don't feel agony in loss."

He continued, “The only time I'm unhappy is if I've done something that hurt the prospects for the success of our effort."

Democrats appear eager to jump on the comment. "For President Obama, the desire to serve the American people certainly outweighs the thrill of sport,” DNC spokesperson Melanie Roussel told Salon in an email. “It's the same competitive spirit that drives Romney economics -- doing whatever it takes for him and his investors to profit, regardless of the cost to workers, companies and communities. In Romney's game, there are two sets of rules – one for himself and others at the top, and another for everyone else.”

Former Romney opponent Ted Kennedy’s own presidential ambitions hit an early stumbling block that he never fully recovered from in 1979 when he badly fumbled the seemingly simple question, “Why do you want to be president?” His rambling answer was so damaging and iconic that it later became the basis of a “West Wing” episode. Romney may have to work on his own answer a bit.

His comment seems telling, coming from someone who has struggled to articulate a real desire to be president. As Alex Pareene writes in his new e-book: “This is the essential problem with Mitt Romney, politician: Where others seek office to gain power or improve people’s lives, Romney has no perceptible interest in either goal.”

Pundits have long puzzled over what’s behind Romney’s political ambitions, often concluding that his serial runs for Senate, governor and then president are a product of living in the shadow of his governor and presidential candidate father. One of the key data points in the Oedipal theory of Romney’s ambition is his supposed fear of gaffes stemming from the fact that George Romney’s comment that military leaders “brainwashed” him on the Vietnam War effectively killed his presidential candidacy. “Mitt Romney’s tendency to make verbal slips is a subconscious repetition of his father’s mistakes, or so the theory goes,” Mike Allen and Evan Thomas write in Politico’s second e-book on the campaign. But when Noonan asked Romney about the “brainwashed” comment, the younger Romney replied, “I don't think my father's comment figures into my thinking at all.”

The compulsion to look at politics as a game or sport is one of the most loathed aspects of today’s political media, but journalists have the excuse of needing to remain independent, and the sports paradigm is an easy way to avoid getting into messy policy issues that could be construed as “bias.”

But it’s another matter entirely coming from a presidential candidate himself. And it may not help a candidate already struggling with a perception of being out of touch that he’s only sad when he does something that hurts his chances of winning the election, because he likes winning the “sport for old guys” so much.