When the 1 percent say no

Cities need public transit and affordable housing. But outdated laws make it easy for the wealthy to block progress 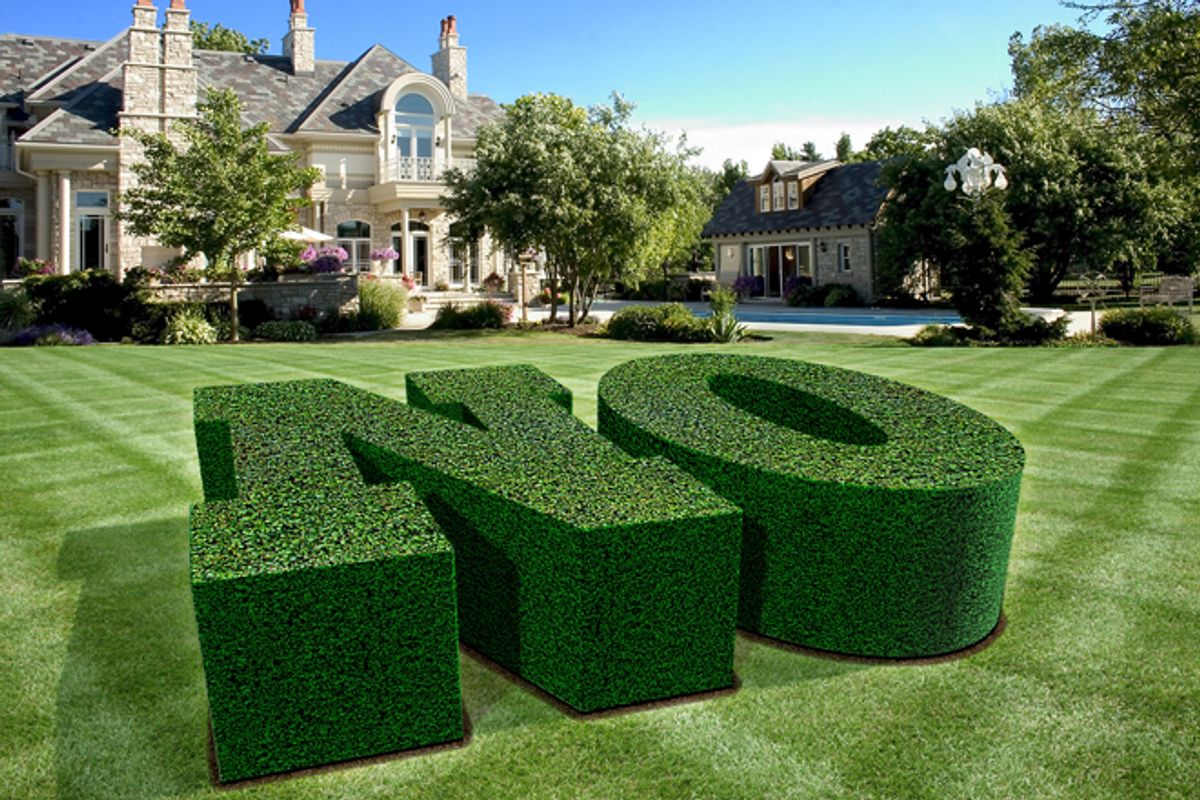 Continuing the grand tradition of privileged communities opposing transit projects, the good people of 90210 are fighting a plan to run a subway below Beverly Hills High School.

For years, Beverly Hills has been trying to derail the planned alignment of the West Side Subway Extension, saying it would be safer to run it beneath Santa Monica Boulevard (though their own study indicates otherwise). The threat of lawsuits and endless public hearings have delayed the project but not killed it; now opponents have released a video claiming that the subway could ignite pockets of methane gas and blow the school to bits. "Methane gas, toxic chemicals and teenagers don't mix," intones the grim voiceover, "but this dangerous combination is on the verge of exploding at Beverly High." Smash-cut to Michael Bay-esque footage of teen-filled hallways consumed by raging fireballs.

You could make an equally scary video about the dangers of NIMBYism, which has essentially become an official part of the urban planning process in many cities. From bike lanes in Brooklyn to desperately needed housing in D.C., public micromanagement has become such a problem that several cities are now trying to rein in the Not-In-My-Backyard crowd. "The current process does not work for anyone," one urban design expert told the San Francisco Chronicle. "We want the Planning Commission to focus on big planning issues, not micro-design issues."

How tiny bands of refuseniks and wealthy obstructionists absorbed so much power provides instructive lessons for how they might be stopped. "The field [of urban planning] went through a major change in the last half-century," says Rob Goodspeed, a PhD candidate at MIT's Department of Urban Studies and Planning. "There was a time in the '50s when people thought it would be more of a science. We'd use expert analysis and computer models to tell us the answers."

This approach, of course, was a disaster. Cities traumatized by the post-war urban renewal projects that arose from such thinking granted broad development-veto power to private citizens. San Francisco got its onerous "discretionary review" process in 1955 as its urban-renewal czar M. Justin Herman was brutally leveling large swaths of the city -- a process that today is used by residents to oppose everything from broadband Internet infrastructure to a neighbor's backyard deck because it could "lead to the use of a grill." Boston created its "citizen advisory committees" in the '60s, whose members, plucked from neighborhood groups, remain empowered to approve or deny development proposals to this day. And in 1970, the California Environmental Quality Act gave anyone in that state the power to stymie development by questioning its eco-friendliness, a right that's routinely abused.

These rules, designed to check the power of city officials, now perversely consolidate immense power in the hands of a few outspoken "concerned citizens." By dragging out the building process indefinitely, these people can make it so expensive that deep-pocketed luxury developers have a better chance of surviving it than anyone actually building affordable housing. Worst of all, these rules have created a new norm in which individual residents just assume that their personal opinions should carry great weight in routine planning decisions. According to a 2011 survey, one in five Americans have actively opposed a local development project, and 74 percent want no new development in their communities at all.

On the one hand, it's nice that so many people think their neighborhood is perfect just the way it is. On the other, this feeling may be a quirk of psychology, not an accurate reflection of reality.

Oxford University researcher Toby Ord co-authored a 2006 paper titled "The Reversal Test: Eliminating Status Quo Bias in Applied Ethics" that helps explain anti-development activism. Status quo bias is an irrational desire for things to stay exactly as they are, even when change would be beneficial. It springs from a variety of factors, from risk aversion to fear of the unknown.

Ord's research showed several reasons why preferring the status quo is often flawed thinking. For instance, wanting zero change assumes that your neighborhood is at its optimum state at that exact moment. Had you moved in 10 years earlier, however, you would have felt it was then in its perfect state, and the development that arrived over the next decade -- the development you now think is perfect -- would have bothered you. "When something is already a part of someone's location or environment, they tend to adapt to it much more easily," says Ord.

People also tend to overestimate transitional costs -- the potentially unpleasant period during which the change is taking place. In urban development, this might mean noisy construction or visual disarray. "It is easy to overstate such transitional burdens," Ord's analysis found, comparing it to America's reluctance to switch to the metric system. "The cost would be one-off, while the benefits of enhancement would be permanent."

But what Ord calls "the argument from risk" -- not knowing exactly what a proposed development's impacts might be -- is perhaps most integral to NIMBY thinking, and it's the tactic that's often used in their arguments. David Ropeik, a Harvard instructor and the author of "How Risky Is It, Really? Why Our Fears Don't Always Match the Facts," says, "If you're looking for issues that will appeal to most people, fear is high on the list." It's why political ads often speculate about what horrible things the other candidate might do if elected, rather than focus on his or her record. "Politicians use fear to get elected, companies use fear to sell products... It resonates more than something intellectual."

Economists call this tendency to let emotions cloud our assessment of risk "prospect theory," which holds that investors feel the sting of losing money more intensely than they feel the pleasure of gaining it. This is why people hold on to falling stocks for too long instead of unloading them -- it's painful to take the loss. In urban development, it's why some people cling to their neighborhood's current state -- say, car-oriented versus getting a new rail line -- even if that current state is deteriorating.

But Ord argues that this is shortsighted because if a proposed development's impact is unclear, it's crucial to take into account not just its unforeseen negative effects, but its unforeseen positive ones, too. "Uncertainty about the goodness of the consequences also means that the results may be much better than anybody expected," writes Ord. "The potential for unexpected gains should not be dismissed as a far-fetched theoretical possibility."

A perfect example of this is old transit systems. When New York constructed its rail lines over 100 years ago, their purpose was to move people around and spur growth uptown. What the city didn't foresee was that, a few decades later, this system would also be key in alleviating surface congestion once car ownership soared. And certainly no one could have predicted that, decades after that, giving millions of people an alternative to cars would help mitigate something called climate change. Many projects will hold future value that goes beyond the perks spelled out in the current brochures.

Understanding the NIMBY mindset this way could help planners work around their concerns. "Since Alexis de Tocqueville there's been a healthy skepticism of big top-down schemes in the United States," says Goodspeed, who thinks that planners do need to listen to all opponents of large developments, even the NIMBYs. "Sometimes that means stepping back, holding more meetings, spending more time on studies -- all of that is the cost of weighing these changes."

But in the end, says Goodspeed, "'Should the subway happen or not?' is not the right question. The question is, if it disrupts their lives and is dangerous for them, how can we mitigate that?" That may mean taking some veto power away from residents, and a few cities are starting to move in that direction. San Francisco has been struggling to reform its discretionary review process to make it less prone to abuse. And at Northeastern University in Boston, new software that could bring the public review process online could both increase transparency and broaden public input beyond just the anti-development gadflies who have time to go to years of public hearings.

For now, though, endless public hearings, lawsuits, and stalling tactics disguised as environmental reviews continue to shape the urban landscape. Last week, Metro officials conceded to yet another public hearing with the Beverly Hills subway opponents -- and were told at that hearing: Proceed as planned and we'll sue you. "We believe there [are] alternatives that have not been fully explored yet," the president of the city's school board told the Los Angeles Times.

The subway's completion date is currently 2036. Might want to push that back a year or two.