As I watch the Bosnian war crimes trial, I wish I could explain the horrors I saw as a boy, and how much we lost 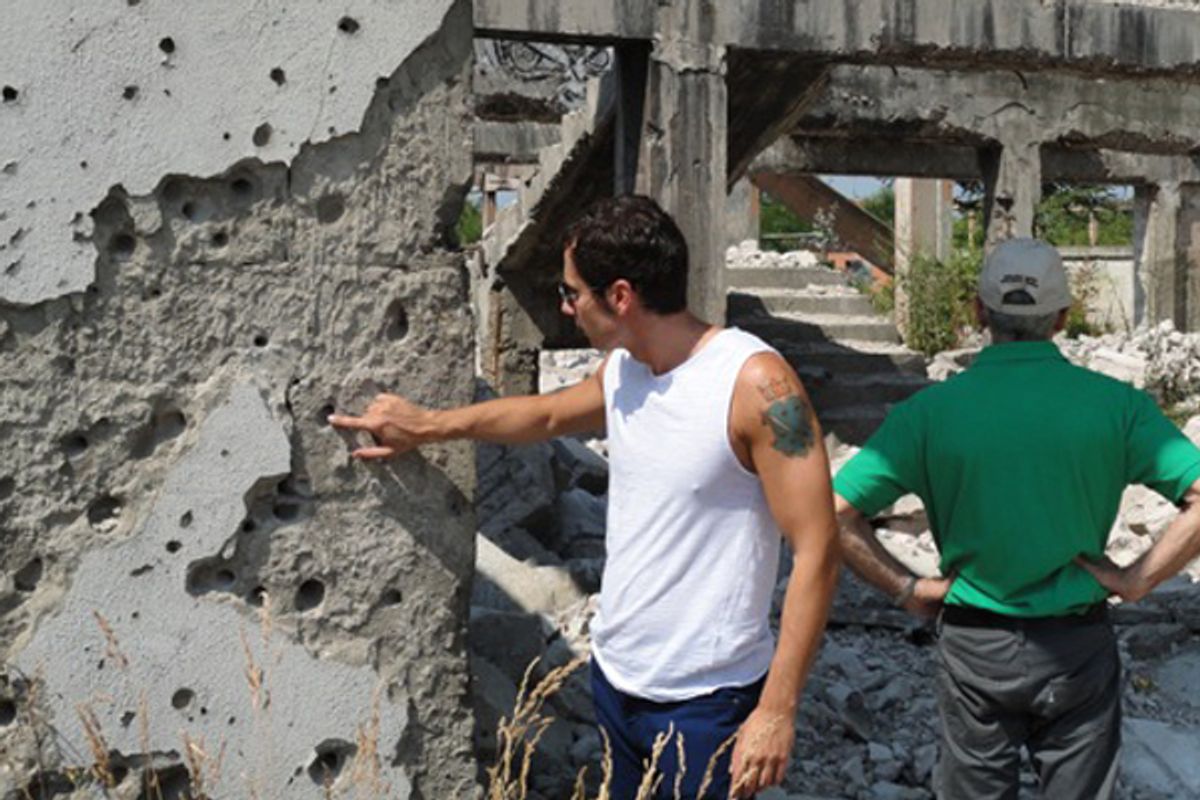 A photo of the author examining bullet holes near the cemetery where his family is buried in Bosnia. (Eldin Trebincevic)
--

My American friend James and I were watching soccer at a restaurant in Queens, but I couldn’t stop reading a story about Ratko Mladic’s trial at the Hague. There were two pictures with the story: One showed him smiling as he listened to his indictment at a pretrial hearing, and another of a mass grave he created.

I wanted to tell James how personal this was. It made me crazy to watch for 16 years as this monster responsible for killing what might be as many as 250,000 of my countrymen eluded authorities. “It’s the modern-day Nuremberg trial,” I said, wishing I could explain better.

I grew up in Bosnia, and fled to America in 1993, at the age of 13, after my family was exiled. A 31-year-old survivor of the war, I am one of the 5,000 Bosnians living in Astoria, Queens. Not long ago, I went back to visit my hometown for the first time since we fled. Vacation for other guys my age means partying, or hanging out with old friends. I spent two weeks visiting graveyards.

On the runway at JFK, I sat between my brother Eldin and my 72-year-old father, Senahid, nervous to return to the land after so many years.

“Which day are we going to the cemetery?” my father wanted to know.

“Which cemetery?” I asked as the plane took off.

The next morning in Brcko, the town of my birth, I climbed into the back seat of our rented car wearing a tank top, jeans and sneakers. My brother Eldin shook his head. “You’re not going like that, exposing your tattoo.” He gestured to the bright blue and yellow coat of arms of the historical Bosnian Flag on my arm. He did not want any trouble.

We were going to see the karate coach, Pero, who betrayed us. Our goal was not to pay respect. It was to see for ourselves that the bastard was dead.

But I’d waited 20 years for this; I would not back down so fast. “Let’s stop so I can get two bottles of water,” I said.

Eldin knew me too well. As we parked, I felt his body temperature rise, along with his anxiety.

This was a Serb cemetery. We didn’t belong here. As I walked by the black marble markers and crosses amid the bitter scent of candle wax, I was conscious of sour looks and muttered profanities. How dare I walk over their sons’ graves with that ink on my left shoulder. In 1992, I would have been shot dead.

As I stood over Pero’s grave, I recalled how my brother and I were his favorites in the karate club.  He helped me become the youngest brown belt there.  One happy evening, my mother invited him over for stuffed peppers.

After the war broke out, Pero was put in charge of the city’s special-police unit. I was shocked when he arrived in front of our building in an army van to cleanse the building of non-Serbs like us. We were given an hour to leave, or be killed. My father and brother were thrown in a concentration camp while my mother and I stayed behind.

Pero turned my second home, the sports complex hall where he’d once coached me in karate, into a torture center where corpses of my neighbors were dismembered and stored, my father learned from fellow inmates. Five months later, I passed by Pero standing with a girl holding an AK-47. He pointed his finger at me and laughed. We later heard he was killed by one of his own, a Serb soldier, over a different girl.

“He’s gone, we’re alive and they still have to live next to us,“ my brother Eldin tried to console me at Pero’s grave. His time came before ours.  At least he had a funeral, unlike many of his innocent victims.

The second cemetery, for Bosnian Muslims, was located on the other side of the city. My Grandpa Suljo was buried there. The hatred and bitterness in the city spread to gravesites: Even the dead were split among ethnic groups. When the fighting began, the burial ground became the frontline, and the place was pummeled in order for Serb soldiers to have an unobstructed view. Horses and tractors ripped up and carried away the remaining headstones. Suljo’s tombstone was sliced in half. Reconstructed, it was glued back together at its base, just like we were.

I also found the grave of my great Uncle Sabit. He passed away a few months before our arrival. I had been hoping to go trout fishing, like we used to.

When the Serbs stormed his apartment, he hid behind a bookshelf. His sister, my Great Aunt Fatima, lay in the grave next to him. She sacrificed herself in 2003, jumping in front of a cab to save her granddaughter. Her husband, Smajl, mysteriously died in the hospital during the war. We never found out what really happened. In my final memory he was offering himself to the military police to distract them from finding Sabit and my father, who were hiding.

Last, we visited my Grandmother Emina, who passed away after holding services for the sixth month anniversary of my mother’s death. Heartbroken, it was a no-brainer that she’d go into cardiac arrest.

“Your tattoo looks amazing,” the undertaker said, waving as he walked away.

We visited two more cemeteries. One contained 556 fighters from our side. Another was a burial ground for both Bosnian soldiers and civilians, a six-hour car ride away.

“Hey, you have to see this guy, he’s not one of us,” I yelled to my brother as I read the Serb name of a soldier buried there: Goran. He was a Serb who fought in the Bosnian Army against his own people; he fought for the good side, despite what he had been born into, and his family put him to rest among his Muslim neighbors. In my book, Goran deserved the most respect.  His ethnicity didn’t matter because he saw the war through the same eyes as everyone else who landed here.  If I’d died in my homeland, this would be the place I’d want to lay.

“You’ll never catch me dead flying over Bosnia,” my mother Adisa used to say after we’d escaped to the United States.

It had been four years since we’d been to see her in Enfield, Connecticut, where we’d promised to spread crushed marble stones on her grave.

“We have to visit mom,” my brother said.

I blamed conditions of the war for the disease that killed her. The leading cause of death for Bosnian women who survived was breast cancer, with high malignancy and mortality rates. Ironically, my mom’s cemetery, just a few hours from where we lived in the United States, was the one grave I couldn’t bear to see.

I couldn’t explain all of this to James – the loss and the unbearable grief. Instead, I just remain glued to Ratko Mladic’s trial in a public viewing gallery in the courtroom, hoping that Ratko will be convicted before he dies in a country-style prison and is given a hero’s funeral, like Slobodan Milosevic.

As my family I wait for a semblance of justice to close the 20th century’s bitter chapter called Bosnia, forgiveness is not an option.  It’s hard not to feel that all the wrong people are dead.

Kenan Trebincevic’s work has appeared in the New York Times and on American Public Media radio. He is finishing a memoir about surviving the war called “The Bosnia List.”