The new face of "Democrats are the real racists!" 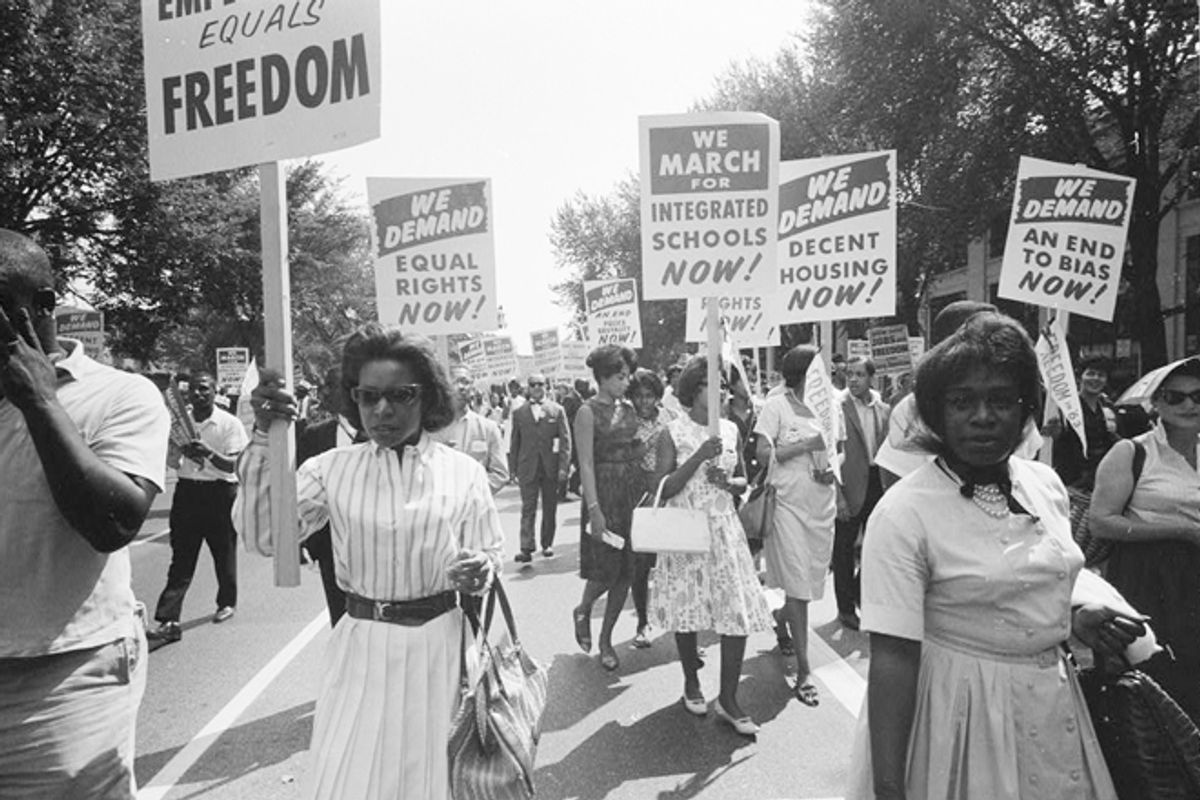 Apparently it is a great big lie -- an "utter fabrication with malice and forethought" -- to say that the Democrats lost their longtime hold over the old Confederacy because their support for civil rights legislation drove white Southerners away. That's according to the National Review's Kevin Williamson, who wrote a big National Review piece about how mad this lie makes him, when the secret truth is that Republicans have always been, and will always be, the single most pro-civil rights party ever.

The piece is largely an attempt to add a patina of respectability to the ancient, brainless comment thread talking point about how Robert Byrd was in the Klan, but lots of Republicans voted for the Civil Rights Act, so therefore Democrats are the real racists. (In this respect, the piece is an homage to Jonah Goldberg's "Liberal Fascism," which attempted to expand "Nazi stands for National Socialist" to book length, without pictures.) The only problem is that the "lie" he's arguing against is 100 percent true, except when he states it in such a way that it no longer resembles what anyone has ever actually claimed.

So: It's true, and no one denies this, that Republicans used to be very good on civil rights and Democrats used to be super racist. It's true that Woodrow Wilson was a bigot and (Northern, liberal) Republican senators were better than (Southern, conservative) Democratic senators on civil rights in the 1940s, 1950s and 1960s. Williamson's argument seems to be that Republicans couldn't have taken advantage of a Democratic split over civil rights by appealing to racist white Southern voters because Republicans were too uniformly pro-civil rights, themselves. (This great big lie he's debunking is one that Nixon and Lee Atwater and Ronald Reagan happily signed on to -- they were thrilled when the Democrats fractured the New Deal coalition by eventually embracing civil rights!)

Williamson would, I guess, call it revisionist history, but he has revised all of the history out of it.

Even if the Republicans’ rise in the South had happened suddenly in the 1960s (it didn’t) and even if there were no competing explanation (there is), racism — or, more precisely, white southern resentment over the political successes of the civil-rights movement — would be an implausible explanation for the dissolution of the Democratic bloc in the old Confederacy and the emergence of a Republican stronghold there. That is because those southerners who defected from the Democratic party in the 1960s and thereafter did so to join a Republican party that was far more enlightened on racial issues than were the Democrats of the era, and had been for a century.

Oh, did they? It's dubious to argue that the party that nominated Barry Goldwater for president was "far more enlightened" than the one that nominated Kennedy, but Johnson was a big ol' Texas racist, so sure, fine, pretend Nelson Rockefeller cancels out Barry. But the segregationists didn't all wake up and decide to vote for Republicans starting in 1965 -- they revolted. George Wallace started a third party. They continued fighting for racism within the party, and they eventually lost. But it wasn't until the conservative movement had finished fully taking over the Republican Party that the great shift finished.

After devoting a lot of words to LBJ's very real history of being a loud-mouthed racist, Williamson explains that Johnson's dumb, loud-mouthed racism was just a reflection of the whole of Democratic Party philosophy and belief since time immemorial.

Johnson did not spring up from the Democratic soil ex nihilo. Not one Democrat in Congress voted for the Fourteenth Amendment. Not one Democrat in Congress voted for the Fifteenth Amendment. Not one voted for the Civil Rights Act of 1875. Eisenhower, as a general, began the process of desegregating the military, and Truman, as president, formalized it, but the main reason either had to act was that President Wilson, the personification of Democratic progressivism, had resegregated previously integrated federal facilities. (“If the colored people made a mistake in voting for me, they ought to correct it,” he declared.) Klansmen from Senator Robert Byrd to Justice Hugo Black held prominent positions in the Democratic Party — and President Wilson chose the Klan epic Birth of a Nation to be the first film ever shown at the White House.

Johnson himself denounced an earlier attempt at civil-rights reform as the “nigger bill.” So what happened in 1964 to change Democrats’ minds? In fact, nothing.

What is the funniest part of this: How it basically makes one brief stop in between 1875 and the mid-20th century in its exhaustive history of Democratic racism? Or how Williamson is clearly annoyed at having to even slightly, obliquely credit Harry Truman (Democrat!) for desegregating the armed forces, a thing (Democrat) Harry Truman did? Like, maybe what happened in 1964 was the eventual result of an intraparty battle that was happening in 1948 when Democrat Harry Truman desegregated the armed forces (and Strom Thurmond, future Republican, threw a big fit about it)?

The 1964 Civil Rights Act, and Lyndon Johnson's role in ensuring its passage, was one major victory in a years-long effort by the party's liberals to make the Democratic Party the civil rights party, and it worked so well that the racists were effectively no longer welcome. They responded by changing their positions or changing sides. It wasn't an overnight change, because politics is slow, but it happened: Robert Byrd and even George Wallace changed their positions on black civil rights and apologized. Those who couldn't adapt, or those for whom bigotry was more genuine belief than political opportunism, left the party. Strom Thurmond became a Republican. Lester Maddox launched a third-party presidential bid against Jimmy Carter and eventually endorsed Republican Pat Buchanan in 1992. Maddox was also a charter member of the Council of Conservative Citizens, the white supremacist paleoconservative group that once counted Trent Lott, Thurmond and Jesse Helms as members. These guys are the heirs to the conservative white Southern Democrat tradition. I'm not really sure they themselves would consider it a pernicious lie to say as much.

What would have been much, much more entertaining would have been if, instead of writing this piece about "Democrats" and "Republicans," Williamson had written it about liberals and conservatives. Barry Goldwater and George Wallace both used conservative rhetoric to justify their segregationist beliefs -- and so did William F. Buckley. Both parties at the time had liberal and conservative wings, and in each of those parties it was the liberal wing that was right on civil rights.

There was really only one American political party with a solid record on civil rights in the first half of the 20th century, and it was the American Communist Party. But "in praise of the liberal Northeastern Republicans who stood with the communists on civil rights and who were eventually driven from the party by conservatives like the ones who founded this magazine" would not go over well in the National Review, I imagine.

Williamson goes on to argue that the white South didn't go Republican because of civil rights, it went Republican because of ... the New Deal. So while the change happened too slowly and gradually to be ascribed to racism, it can happily be pinned on a series of popular economic programs that had been enacted 30 years prior to 1964. (Programs so popular that Southern racists and blacks joined together in a political coalition that lasted until liberals began ... winning civil rights victories.)

But let's not also forget to blame hippies and welfare:

The Republican ascendancy in Dixie is associated with the rise of the southern middle class, the increasingly trenchant conservative critique of Communism and the welfare state, the Vietnam controversy and the rise of the counterculture, law-and-order concerns rooted in the urban chaos that ran rampant from the late 1960s to the late 1980s, and the incorporation of the radical Left into the Democratic Party. Individual events, especially the freak show that was the 1968 Democratic convention, helped solidify conservatives’ affiliation with the Republican Party.

In other words, it was literally everything that was going on in the 1960s besides civil rights issues that made white Southerners eventually fully embrace the Republican Party. (And blacks continue to support the Democrats because Democrats lied about what happened in the 1960s and because Johnson promised them free government money forever, apparently.)

I mean it's obviously true that the shift didn't happen purely because of the Civil Rights Act of 1964, but it's just as obviously true that it's a hilarious and deeply stupid misreading of history to pretend that the Republican Party has always and will always be the champion of civil rights.