"Tubes": What the Internet is made of

If you think your data lives in the cloud and flies through the air, you're wrong 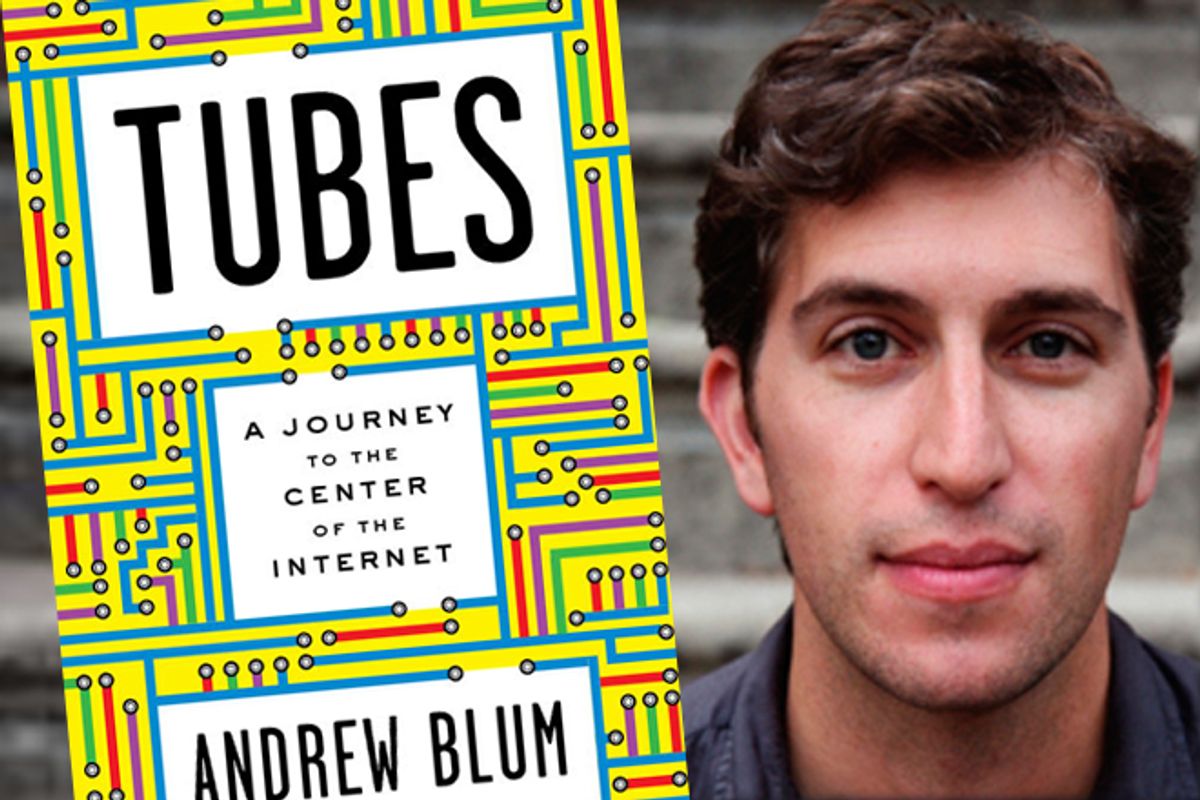 The title of Andrew Blum's "Tubes: A Journey to the Center of the Internet" is a ricocheting joke. When Alaskan Sen. Ted Stevens described the Internet as a "series of tubes" back in 2006, he was roundly mocked for not understanding the online world despite being chairman of the Commerce, Science and Transportation Committee and therefore instrumental in overseeing it. Stevens may not have known what he was talking about, Blum (a correspondent for Wired magazine) acknowledges, but he wasn't wrong, either. In writing this account of "the Internet's physical infrastructure," Blum found that "one thing [the Internet] most certainly is, nearly everywhere, is, in fact, a series of tubes."

The average resident of the developed world uses the Internet constantly, contemplating its impact on contemporary life and exploring its numberless delights, temptations and annoyances on a daily basis. Yet, for most of us, any notion of how all this information arrives in our homes and workplaces is weirdly immaterial. Stevens was ridiculed for his hopelessly old-fashioned reference to the physical world and the movement of palpable objects, while smart kids and late-night comics grasped that the Internet has zipped beyond all that to become the disembodied essence of human communication.

Only it's not, and "Tubes" is about the actual, physical things -- many of them tubes -- that make up the pathways of the Internet. For all their significance to contemporary life, governance, commerce and industry, these conduits aren't an alluring topic. Like a lot of important things, they are superficially dull and trivial: bundles of cables; deserted stations ringed in cyclone fencing beside lonely highways; featureless, windowless buildings in old warehouse districts and, above all, rooms filled with metal boxes, blinking lights and cool, dry processed air. This is not the stuff that dreams are made of -- and at the same time it is, because dreams of every sort thrive online.

Fortunately, Blum is a smart, imaginative, evocative writer who embraces the task of making his readers feel the wonder represented by these unprepossessing objects. In the Cornish seaside town of Porthcurno, he's shown a black cable emerging from the floor, "spooled into steel trays the size of merry-go-rounds, like something stolen from Richard Serra's storehouse," and pictures the thousands of miles it extends, through the depths of the Atlantic Ocean, all the way back to Long Island, where, in the form of light shining down strands of glass, it will carry home the email he writes to his wife from his hotel room that night. (Another cable, running from Portugal to Africa is a "nine-thousand-mile path of light... that would transform a continent.") Swathes of cables lifted from beneath the streets of Manhattan by workmen are likened to "giant squid under the streetlights."

This book is more than a electrical engineering travelogue, however; in the course of his research Blum interviewed representative examples of the people who make the Internet work and a smattering of those who helped build it in the first place. The computer science professor at UCLA who, in 1969, used a phone line to connect that university's computer network with Stanford's shows Blum the IMP (Interface Message Processor) used for the task: a file-cabinet-sized box -- the first piece of the Internet! -- now shoved into the corner of a shabby conference room. He attends a meeting of network operators, the people who, among other things, negotiate the direct, plug-in, network-to-network connections that are the building blocks of the net, and hears a Dutch woman imitating an old-school street hawker: "I have eyeballs, eyeballs, eyeballs. For all of you with content, please send me an email."

So ingeniously beguiling is Blum's way of conveying all this that, before you know it, you have acquired a sense of the basic structure of Internet -- from old-school exchanges to fiber-optic regeneration stations. The Internet turns out to be not quite what Blum (and a lot of other people, including myself) assumed. "I expected to find a loose arrangement of little pieces," he writes, expressing an idea probably shared by many of his readers. "It was all supposed to be distributed, amorphous, nearly invisible." True, information can travel via a variety of routes, but most of the time it makes its way along major thoroughfares. While the Internet doesn't exactly have a center, it certainly has nodes and backbones where most of the connections are made and the data stored. Blum tried to lay eyes on as many of these as he could.

It wasn't always easy. Having arranged to visit a brand-new Google data center in rural eastern Oregon, Blum never gets closer to the servers than the lunchroom, and his interviews are supervised so oppressively it's like taking an official tour of North Korea. (Perhaps ironically, a Facebook center in the same region proved much more open.) For months, Cablevision, his own Internet service provider, dodged his requests for an overview of how data got from their network to his home in Brooklyn. While the more secretive of the organizations he contacted often attributed their caution to security concerns, Blum was skeptical. He compares a stopover at the friendly visitor center at nearby Bonneville Dam to the "Orwellian atmosphere" at Google; both are important, strategically sensitive resources, but only one is shut up tighter than Fort Knox. Blum questions whether it's wise to hand over "so much of ourselves" to corporations that are not obliged to return the trust.

Part of the utopian romance of the Internet is that it has no weight, no friction, no footprint, no smell. The buzzword of the moment -- "cloud" -- promises ethereality, pure information, a dream with almost supernatural intimations. Yet as one of Blum's data-center tour guides explains, "This is the cloud. All those buildings like this around planet create the cloud. The cloud is a building. It works like a factory." It needs power, raw materials and staff. And its roots are in the earth.