"Hatfields & McCoys": No heroes, no humor 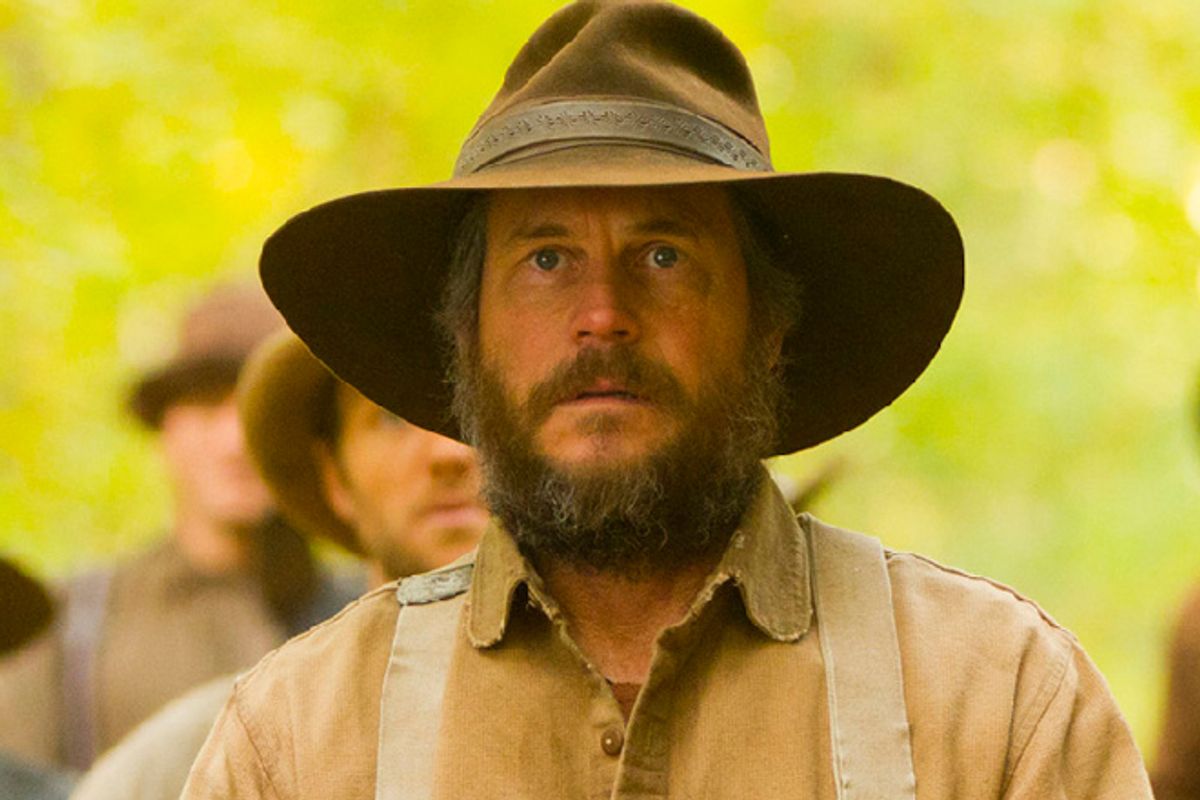 The Hatfields and McCoys -- two rival clans who ruthlessly and needlessly slaughtered each other in the decades following the Civil War -- are infamous for being vengeful, wasteful and murderous. The internecine conflict they waged began in earnest with a dispute about a pig and went on to consume dozens of lives for no reason but bullheaded family honor. The sheer scale and meaninglessness of their fight makes it ripe source material for a revisionist Western in which the good guys don’t wear white because there are no good guys. (Though given the stylistic ultra-grime currently en vogue, in which costume designers seem to be trying to make the audience smell something, white is also in short supply these days.)

The History Channel's “Hatfields & McCoys,” a painstakingly detailed, mind-numbing, three-part mini-series about the feud, stars Kevin Costner as Anse Hatfield of the West Virginia Hatfields and Bill Paxton as Randolph McCoy of the Kentucky McCoys, the two unyielding patriarchs of the warring families. “Hatfields & McCoys” is a sort-of enervated “Deadwood” (one of the writers, Ted Mann, worked on “Deadwood”). It’s got law and lawlessness duking it out against a backdrop of grime, guts and gravelly voices, but this is all served up humorlessly and laden with self-seriousness. In this telling, there are no heroes and, ultimately, no justice, but the whole sordid saga gets lightly burnished by its epic treatment, anyway. The story of the Hatfields and McCoys is as profligate and petty as it was bloody, but a handsome three-part mini-series starring Kevin Costner that carefully, ploddingly catalogs each and every murder inadvertently makes meaning where there are only bodies.

In this version of the feud, Anse and Randolph fought together for the South in the Civil War. Randolph saved Anse’s life, and Anse bravely saved their unit before deserting, an act that earns him the forever enmity of his former friend. It is McCoy’s rigid hatred that fuels the fight that follows, even though it is the death of his brother at the hands of an unhinged Hatfield (a grizzled Tom Berenger in the equivalent of the Joe Pesci part in "Goodfellas") that precipitates the conflict. Paxton has a beard and a nasty haircut, and his Randolph McCoy is unforgiving, unyielding and righteous. Unlike the Hatfields, McCoy wants to have the law and God on his side — but seemingly to justify doing lawless, godless things. As the feud is escalating, his three sons unwarrantedly stab a Hatfield to death. In retribution, the Hatfields round up the killers and execute them. McCoy hires bounty hunters, enraged that the Hatfields didn’t allow his sons to be prosecuted in a court of law, but seemingly indifferent to the fact that they are murderers. He thinks he is in the right, and so he believes he can continue overseeing wrong.

In comparison, Costner’s Anse, who smiles a grand total of two times in this largely smile-free production, seems likeable. The title of the movie is a little misleading, there are both Hatfields and McCoys in it, but the Hatfields get the better edit. Yes, the Hatfields seem to be far more effective killers than the McCoys, but Anse holds no grudge against Randolph — after the war, he tries to make nice — and he operates according to the relatively untortured “if you kill a member of my family, you should be killed in return” motive. Anse forgives his traitor son Johnse (Matt Barr) for falling in love with a McCoy, while Randolph will not forgive his traitor daughter Roseanna for falling in love with a Hatfield. (This storyline, the Romeo and Juliet portion of the Hatfield-McCoy feud, seems dropped in from The CW’s TV movie on the same subject, endlessly showcasing Barr without his shirt on.) Anse’s tragic flaw is an unwillingness to turn the other cheek. Randolph’s tragic flaw is to believe in his own rectitude. One guy is a brawler, the other a lecturer. They may be equally wrong, but they are not equally good company.

Watching Costner be mildly likeable despite his best efforts to be merely gruff and tortured, I was reminded that the ideal Kevin Costner, the guy who was a movie star, was willing to make a joke. Ever since he won an Oscar for “Dances with Wolves” and was overly rewarded for taking himself way too seriously, Costner has all but disavowed the humor that popped up in his best performances (or at least in "Bull Durham's" Crash Davis) in favor of something more macho and steely, forgoing the laid-back everyman who rises to the occasion to play the guy who lives by his guns. But even guys with guns can throw in a wry line or two, and “Hatfields & McCoys” could use some levity. (To be fair to Costner, that’s more on the writers than the actors. “Hatfields & McCoys” has an almost entirely joke-free script. In this post-“Deadwood” age, I'm flummoxed that humor could still be considered antithetical to heady, dirty, violent period dramas dealing with American lawlessness.)

Speaking of levity, perhaps our nation's most beloved class clown once had a run-in with the Hatfields and McCoys. About halfway through “The Adventures of Huckleberry Finn,” Huck finds himself in the middle of a bitter, nonsensical feud between the Grangerfords and Shepherdsons that closely resembles the one between the Hatfields and McCoys. At one point Huck, who is trying to get back on the river, hides in a tree while some Sheperdsons kill two Grangerford boys, one of whom Huck knows. “The boys jumped for the river — both of them hurt — and as they swum down the current, the men run along the bank shooting at them and singing out, “kill them, kill them!” Huck says. “It made me so sick I most fell out of the tree. I ain't a-going to tell ALL that happened – it would make me sick again if I was to do that. I wished I hadn’t ever come ashore that night to see such things. I ain’t ever going to get shut of them — lots of times I dream about them.” As violent and detail-oriented as "Hatfields & McCoys" is, there's not one scene as horrifying as the image of grown men singing out "kill them, kill them" while shooting at helpless teenagers, but, be warned, it's not for lack of trying.