The AFL-CIO says labor will reshape its political operation. Not all union leaders think it goes far enough 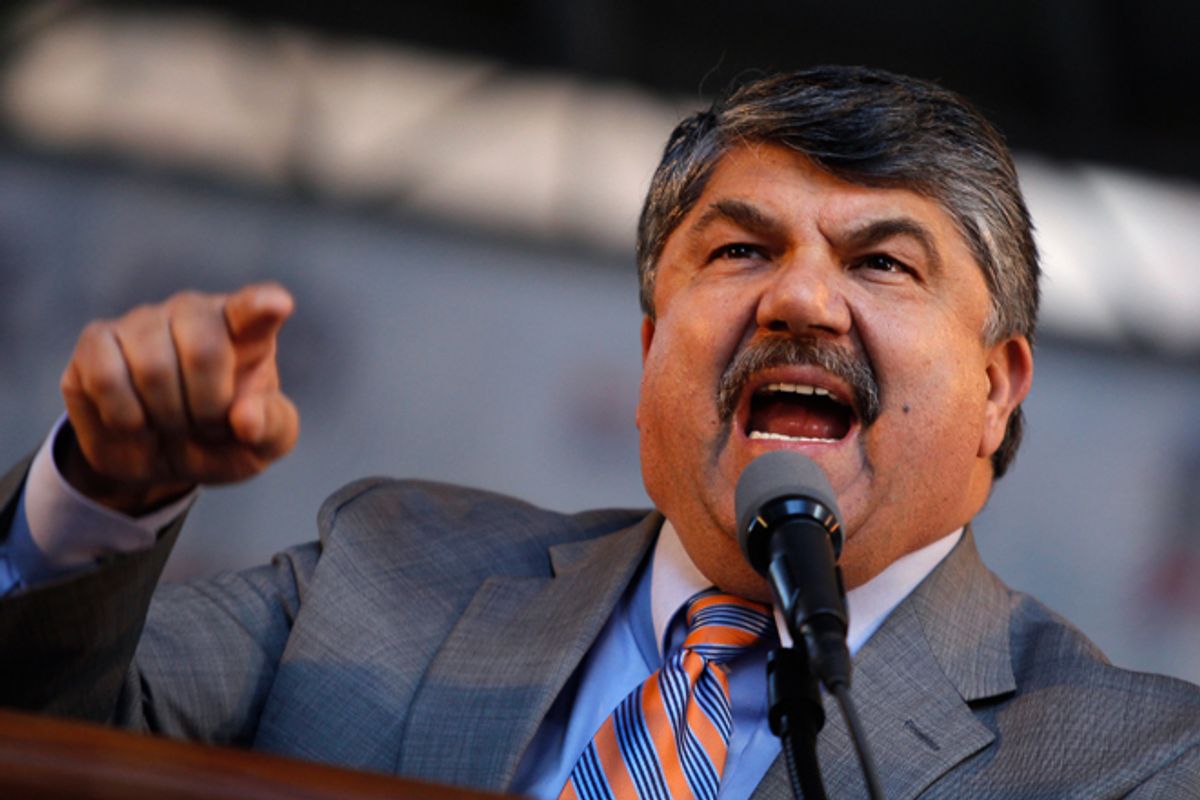 No one was surprised this winter when the AFL-CIO and its major unions endorsed President Obama’s reelection. Despite decades of enrollment decline, the AFL-CIO remains the largest membership organization in progressive politics, and it is a much relied-upon ally in Democratic election campaigns. But faced with a post-Citizens United landscape and armed with hard-fought lessons, AFL-CIO President Richard Trumka is pledging a “big change” in how the federation does politics.

“Before, we used to build everybody else’s structure,” says Trumka, “and now, we’re going to build our own structure.”  He says to expect three changes: more focus on door-to-door organizing rather than TV ads; more funds toward building a permanent, independent political infrastructure and less towards candidates’ coffers; and more outreach beyond union households.

What could this look like for Obama’s reelection effort in Ohio or Elizabeth Warren’s Senate campaign in Massachusetts? Less direct campaign cash from unions and fewer union-backed TV ads on their behalf. More union volunteers, acting apart from the Democratic campaign, persuading and mobilizing people to vote for the candidates. And an organization pledged to better hold the candidates accountable if they win.

“The dilemma of Citizens United,” says AFL-CIO Political Director Michael Podhorzer, “is that [conservatives] have a huge megaphone to repeat lies. Our view is that when someone has a conversation with someone – especially with someone they know – that has much, much more power than top-down TV commercials… We have to build that to scale.” To that end, the AFL-CIO launched a new PAC called Workers' Voice. Rather than running TV ads or donating to candidates, the PAC will fund the training of worker volunteers to talk to other workers on the job, over the phone or while at home about the coming elections. Trumka says he hopes to involve 400,000 volunteers, each of whom will both activate other workers and train them to do the same.

In the past, says Trumka, the AFL-CIO would build political infrastructures and then “tear them down” in between elections. This time, he says, labor will build a “full-time, year-round campaign structure,” which can transition from electing politicians, to holding them accountable on issues, and back again. Trumka says this will make a difference whenever “one of our friends or acquaintances gets amnesia” about workers’ rights. As an example of its commitment to independence and volunteerism, Workers' Voice told the Huffington Post last month that workers who take volunteer shifts will earn votes on which campaigns get Workers’ Voice support.

Trumka drew attention – and some skepticism – with speeches last year (and an interview with Salon’s Joan Walsh) promising greater political independence from the Democratic Party. Podhorzer says the recent decline in direct contributions from unions to candidates backs up Trumka’s promise. Echoing his past comments, Trumka says that labor’s efforts will be focused on “friends” who’ve earned it. He lists President Obama among those friends, saying that while he “got sucked into the wrong debate for a while” – over deficits rather than jobs – his focus has since improved, and he “came in at the worst of times and has created several million jobs.” A Romney presidency, warns Trumka, would mean bankers could “run DC like a branch office.”

Thanks to Citizens United – a decision the AFL-CIO opposes -- labor can take that case to a larger audience than ever before. Unions have long had the legal right to spend money to communicate about politics to their members (contrary to right-wing talking points, for decades workers have had the option not to pay for their unions’ political activism). But – except for members of Working America, an AFL-CIO affiliate for workers without unions – non-union households were long off-limits for unions’ political efforts.

Citizens United changed that. “Before,” says Trumka, “you could only knock on union doors. Now, we’ll be able to knock on every door in a working-class neighborhood. So it’ll be a big difference.”

The federation’s shift isn’t a 180-degree change. Asked whether the AFL-CIO will cease all donations to party committees, which spend money based on their own priorities, Trumka says it won’t. “Sometimes it’s symbolic,” says Trumka. “Sometimes you want to show some support.” Asked whether the AFL-CIO will devote resources to primary campaigns against conservative Democrats, Podhorzer says Republicans had taken care of that for this cycle by wiping out most of them.

Incoming South Carolina AFL-CIO President Ken Riley says the national federation’s shift is “not as significant a difference as it may sound.” He says more drastic change is needed – not this year, when all-out effort against Republicans is necessary, but after the election. Riley wants to see more political resources used to challenge anti-union Democrats and more resources shifted from politics into organizing non-union workers in states like his. Citing an estimated hundreds of millions of dollars in labor spending on this election cycle, Riley says that for a fraction of the cost, organizers in South Carolina could “paint the state blue” by organizing more workers into unions. Without more drastic change, Riley warns, “we will succumb to the same treatment we’re getting, right into the future, and our numbers will continue to dwindle, and we will be legislated out of existence.”

Trumka says such criticism is misplaced. “We do [put] a tremendous amount of money into organizing,” he says, but the AFL-CIO’s job is also “to create a climate where organizing is possible … To working people, politics isn’t just about winning elections, but it’s about a way to restore economic and political balance between the rich and the poor.”

A similar debate is playing out in the fight to lead AFSCME, the largest public sector union and the largest union in the AFL-CIO. With long-time AFSCME President Gerald McEntee retiring, delegates to next month’s convention will choose between current Secretary-Treasurer Lee Saunders and challenger Danny Donohue, who leads AFSCME’s largest affiliate. Donohue charges that AFSCME, under McEntee and Saunders, has been bankrolling national Democratic Party priorities at the expense of local struggles, trying to win over politicians with donations (what he calls “checkbook unionism”) at the expense of being a “grassroots union” that wins respect by mobilizing members.  “The last few years should have proved to us,” says Donohue, “that we can win the White House and we can lose our members in state after state.”

Reached over e-mail, Saunders said, “We have always built and maintained a formidable ground game” and that “nearly two-thirds” of the union’s political resources for the 2009 to 2012 cycle “have been devoted to state and local fights …”  Saunders charged that Donohue was “quibbling over some past tactics” and said he doesn’t believe he is “seriously proposing to dismantle or radically change one of the most aggressive and sophisticated political operations in the labor/ progressive movements.”

“It seems like every election cycle, there’s the same kind of discussion of ‘We’re doing politics differently’” says Columbia University political scientist Dorian Warren. “But I do think it’s really smart – and kind of obvious, but really smart – to focus on the ground game. Because there’s no way they can even compete with the Right and with the corporations in the ad wars, and we know that pound to pound and buck to buck, you get more with the ground game and face-to-face voter contact. So that’s heartening, and it means they’re on the right track.”