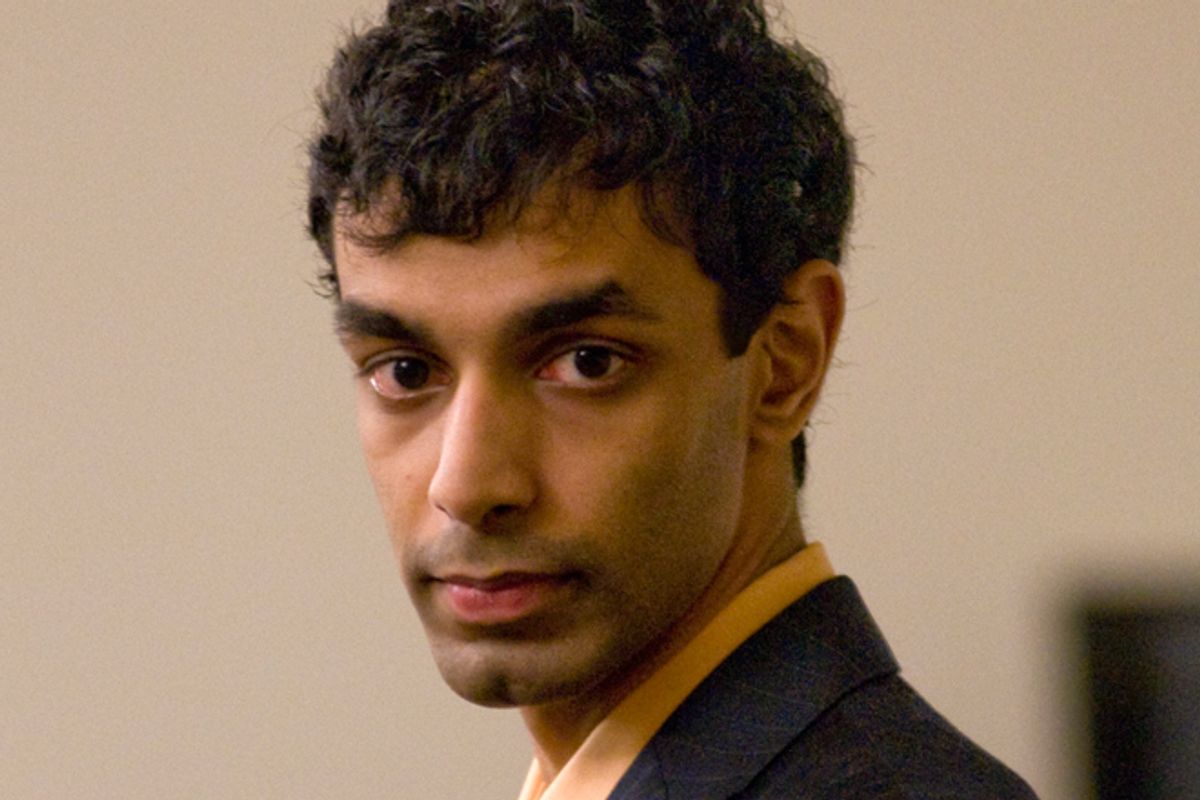 When Judge Glenn Berman sentenced Dharun Ravi in a New Jersey courtroom earlier this month, he disgustedly told him, "I heard this jury say guilty 288 times. Twenty-four questions, 12 jurors, that's the multiplication. And I haven't heard you apologize once." In March, Ravi was convicted of bias and intimidation stemming from two incidents of secretly filming his Rutgers roommate Tyler Clementi "making out with a dude" -- and then boasting about it on Twitter. Clementi jumped off the George Washington Bridge shortly after.

The incident drew international attention and became a turning point in the anti-bullying movement. Yet throughout it all, Ravi remained conspicuously silent. Even as he faced the possibility of deportation and 10 years in jail, even when the judge called his behavior "offensive and unconscionable," he didn't offer a mea culpa. When Clementi's fellow victim in the webcam spying incident, the young man known to the court as "M.B.," issued a statement that Ravi "has never apologized to me for what he did and said," and that he does not "believe that he has taken responsibility for his conduct," Ravi still made no attempts at amends.

But on Tuesday, the 20-year-old, who will begin serving his 30-day sentence this week, finally spoke out about the callous actions of his 18-year-old self. In a statement issued by his lawyer, Ravi declared, "I accept responsibility for and regret my thoughtless, insensitive, immature, stupid and childish choices that I made on Sept. 19, 2010, and Sept. 21, 2010. My behavior and actions, which at no time were motivated by hate, bigotry, prejudice or desire to hurt, humiliate or embarrass anyone, were nonetheless the wrong choices and decisions. I apologize to everyone affected by those choices."

No one but Ravi can vouch for the sincerity of his words or for whether he believes that this gesture is truly "the only way I can go on with my life." And Ravi doesn't fully say what, if not bigotry or a desire to hurt, his motives were. He may not comprehend them himself. Few of us have committed acts as atrocious, as violating, as the ones Ravi did on September 19 and 21 of 2010. But anyone with a shred of humanity has known what it feels like to look back on his lowest moments, his worst transgressions, and wonder, why did I do that? How could I have?

Ravi has the next month to sit in a jail cell and ponder the answers to those questions. And though nothing he can ever come up with will undo the damage he caused or the horrible chain of events he set in motion, there is, within that first step toward atonement, the possibility that one more young life won't be thrown away now. There is the hope that in accepting responsibility, Ravi, unable to rewrite his past, can at least have a future. Because while punishment comes when the judge hands down a sentence, forgiveness can only begin when the perpetrator apologizes. That's why, after nearly two years locked in his own silence, Ravi's liberation won't come when he walks out of a New Jersey jail. It began the moment he said he was sorry.