Romney learns to love the Fed

With the primary over, the Romney camp has nice things to say about Ben Bernanke, whom the GOP base loves to hate 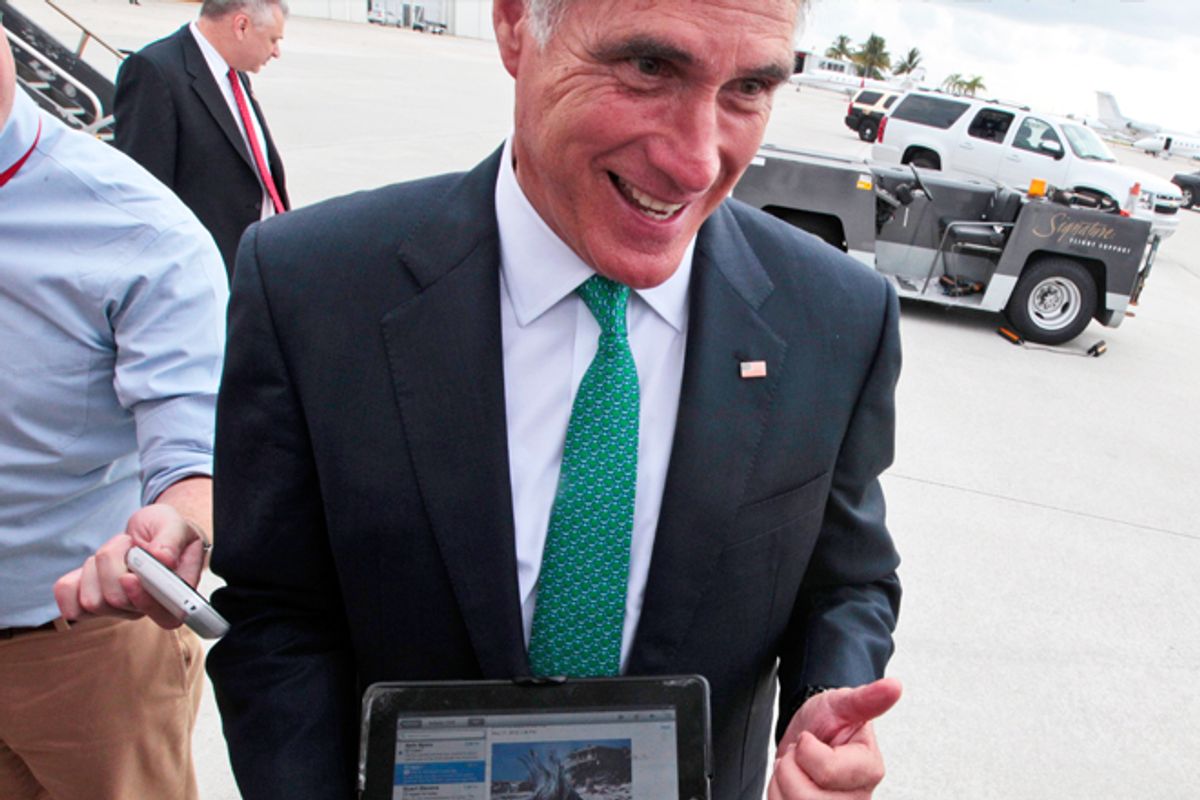 Mitt Romney never called Federal Reserve Chairman Ben Bernanke a traitor to his country or threatened to string him up in a Texas lynching. That was Rick Perry. Nor did he label the mild-mannered economist "the most inflationary, dangerous and power-centered chairman of the Fed in history." That was Newt Gingrich. Nor did he sign a letter demanding that the Fed do absolutely nothing that might conceivably stimulate economic growth (and thereby enhance President Obama's reelection chances). That was the entire GOP congressional leadership.

But he did say, when asked directly during a debate last September, that he would not reappoint Bernanke as chairman of the Fed. As Romney clunkily explained it back then, Bernanke's monetary stimulus "has over-inflated the amount of currency that he's created" and "did not get Americans back to work."

With those words in mind, how should we interpret a report from the Wall Street Journal indicating that, as far as Romney's top economic advisor, Glenn Hubbard, is concerned, "if there’s a hero in this story, it’s the Fed and Chairman [Ben] Bernanke.”

The "story" being the great narrative of financial crisis, recession and recovery. Hubbard is someone whom we should probably take seriously on the topic of Bernanke. Both men served as chair of Bush's Council of Economic Advisors. Presumably, Hubbard is one of the people whose opinion on whether to reappoint Bernanke or pick someone else would be important. (Hubbard is also a prime candidate for the job himself.) But if Hubbard is publicly labeling Bernanke a hero, why wouldn't Romney reappoint him?

Hubbard's comments provoked some unkind tweets from financial journalists about Romney's new Etch-a-Sketch drawing of Bernanke. And not without merit. The truth is, the real reason Romney turned against Bernanke had nothing to do with his policies. Bernanke is much more vulnerable to criticism from the left for not doing enough to address unemployment than he is from the right for stoking nonexistent inflation. As recently as January 2010, Romney was complimenting Bernanke on the great job he was doing.

But the GOP base hates Bernanke. The Tea Party sees him as an unelected tyrant, busily bailing out the banks while creating oodles of "fiat" currency that will ultimately destroy the nation. The audience at a CNN debate in which Michele Bachmann was asked if she supported Rick Perry's accusation of treasonous behavior cheered wildly at the mere raising of the topic. During the primary campaign, Romney tailored his Federal Reserve policy points to appeal to the crowd that sees central banking as just one step to the right of the antichrist.

But that's all over now. As of Tuesday night, Romney has officially acquired sufficient delegates to clinch the Republican nomination for president. He no longer is under any requirement to pander to the Republican base and is now free to act like the moderate Republican that he's always been.

And make no mistake, if there's one thing that Romney will dedicate himself to as president, it will be keeping Wall Street and investors in financial markets happy. That will mean continuing, without change, to support a Federal Reserve that is eager and willing to flood the monetary system with cheap cash every time it looks like the stock market is about to crash. Bernanke is the perfect guy for that, or, failing that, someone who can be depended on to do exactly what Bernanke would do.