The shrill, militaristic Manichean worldview that brought us the Iraq war is gone -- except when it comes to Iran 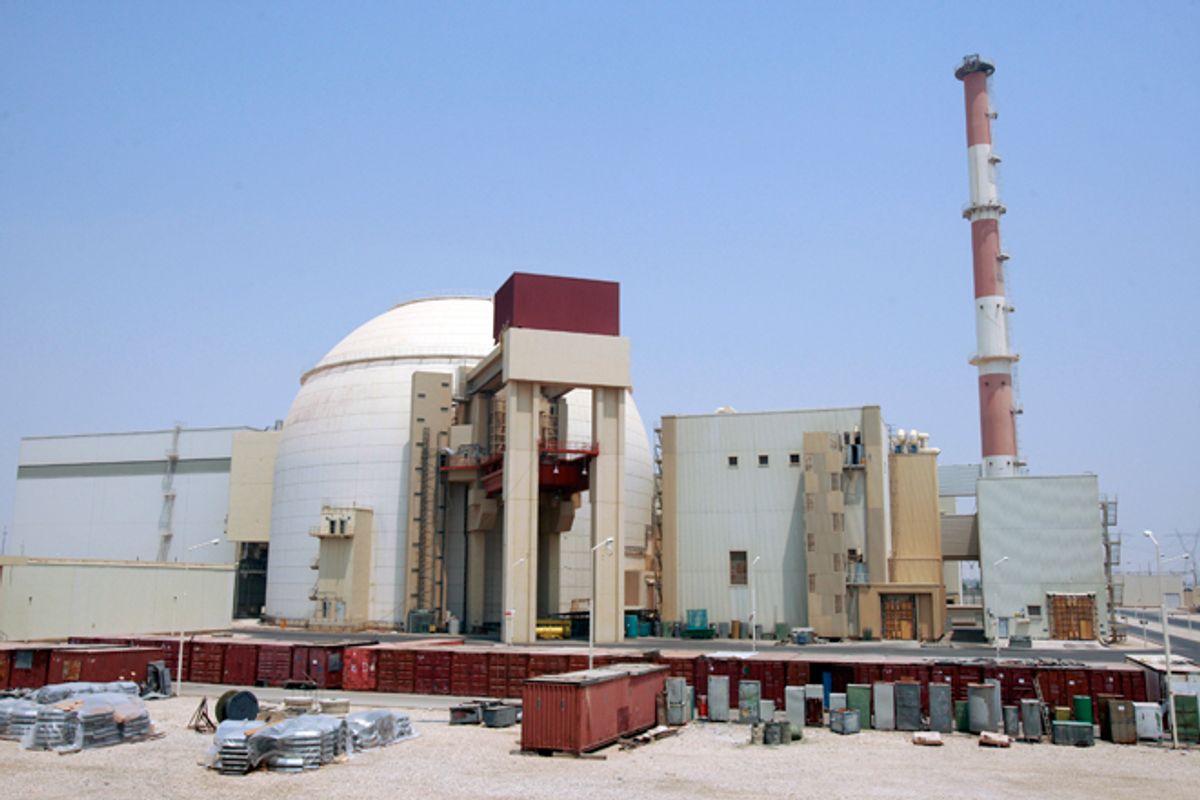 The main reactor at the Bushehr nuclear facility in Iran. (Reuters/Raheb Homavandi)
--

The nuclear summit that concluded last week between Iran and six world powers was a ridiculous charade. The Obama administration never intended it to succeed. Its sole purpose was to placate hawks in U.S. Congress, ensure that Democratic donors keep writing checks during election season, and buy another month of time during which Israeli Prime Minister Benjamin Netanyahu will not be able to bomb Iran. In the meantime, American drivers can sit back and enjoy more $4-per-gallon gas.

The talks failed because the U.S. and the rest of the P5+1 (Russia, China, Britain, France and Germany) refused to take yes for an answer. The key issue on the table was Iran’s accumulation of uranium enriched to 20 percent – not a high enough level to make a nuclear weapon, but close enough that it would be much easier for Tehran to do so. Iran made it clear that it was prepared to stop enriching to 20 percent and to even ship its stockpile of enriched uranium out of the country, if the U.S. and the other powers agreed to relax the draconian sanctions they have imposed on the country.

This deal would have been a major diplomatic breakthrough. It would have greatly reduced Iran’s capacity to develop a nuclear weapon, defused tensions in the region, calmed the oil markets, driven prices at the pump down and made it impossible for Netanyahu to attack Iran. In a presidential campaign as tight as this one, a significant drop in gas prices could be the difference between Obama being reelected and Romney defeating him. So why didn’t the Obama administration take the deal?

The ostensible reason, piously mouthed by Secretary of State Hillary Clinton, is that the U.S. believes that the upcoming, even harsher round of sanctions on Tehran will generate even further concessions. According to this line of reasoning, Iran only came to the bargaining table because of sanctions, and more sanctions will produce better results.

But this justification is transparently false. First, Iran has made it clear again and again that it will never allow itself to be seen as folding under U.S. pressure. It is prepared to negotiate, but successful diplomacy requires not just sticks but carrots. The carrot the P5+1 offered at Baghdad was ridiculous: If the Iranians agreed to suspend 20 percent enrichment, what they would receive in return was not a reduction in sanctions, but rather spare aircraft parts. For Tehran, accepting this deal would have been tantamount to surrendering. As Iranian analyst Hasan Abadini said, “Giving up 20 percent enrichment levels in return for plane spare parts is a joke.” These are not arcane diplomatic mysteries. As Iran expert Gary Sick pointed out in an interview on NPR, what it will take to reach a resolution of this issue is clearly understood by all the players involved. It is no more possible that the Iranians would have taken that deal than that the Palestinians would agree to establish their state in Jordan.

Second, Clinton’s argument that the Iranians will make more concessions begs the question: what concessions? The only remaining significant concession Iran could make would be to agree to give up enriching uranium altogether – and it has made it clear that it is never going to give up that right, which it is guaranteed as a signatory of the Non-Proliferation Agreement. In an interview with Washington Post columnist David Ignatius, former Iranian negotiator Seyed Hossein Mousavian made it clear that Iran would be prepared to give up 20 percent enrichment if its rights to enrich uranium were recognized.

All of this makes clear that the U.S. knew going into the negotiations that they were not going to succeed. The entire process was an elaborate ritual whose dual purpose was to inoculate President Obama against charges that he was “soft on Tehran” and to make it impossible for Netanyahu to go postal.

In fact, despite the conventional wisdom, it is extremely unlikely that the far-right Israeli leader will attack Iran. His constant threats to do so were the reason that Congress imposed the latest round of sanctions, against the Obama administration’s wishes. But despite Congress’s lockstep support for Netanyahu and anything he decides to do, up to and including an attack on Iran, it would be far too risky for Netanyahu to actually do it. The American people, unlike their bought-off, coerced and/or ideologically myopic political representatives, are sick of Middle East wars. Many, including increasing numbers of American Jews, are growing weary of Israeli intransigence and extremism. They’re also broke. An Israeli attack on Iran would draw in the U.S. and plunge the world into a depression – and the American people would hold Israel to account. Netanyahu may, as the former head of Israel’s spy service said, be “messianic,” but even he knows better than to jeopardize his country’s relationship with America. However, in order to manipulate America, it is essential that he constantly give the impression that he is about to attack Iran.

The Obama administration probably knows that Netanyahu is bluffing. But it has to play out this farce to placate Congress, keep pro-Israel Democrats writing checks, remove a Romney attack line and generally appear tough on Iran.

The irony is that the U.S. and Israel are always claiming that Iran uses negotiations over its nuclear program to play for time while it works feverishly to develop a bomb. But playing for time is precisely what the U.S. just did.

Obama is trying to run out the clock on Iran before the November election. He adroitly stalled the nuke-Iran hysteria that built up during the AIPAC conference in March, but he did so at a price, painting himself into a corner with tough rhetoric denying that containment of a nuclear Iran was an option and threatening to use military force. The negotiations in Baghdad had to fail in order for him to maintain that posture.

His strategy may work. He may stumble over the finish line in November, still dragging out negotiations. And he may overcome the serious headwind of high gas prices and beat Romney. But there is nothing good to be said about his weak and pandering approach. It will not stop the Iranian nuclear program, it is causing the Iranian people to suffer, and it hurts the average U.S. citizen. At bottom, it is an approach predicated not on achieving real progress in dealing with the Tehran regime but on overthrowing it. As such, it is antithetical to Obama’s proclaimed desire to reach out to Iran and to reset America’s relationship with the Middle East. In the long run, he will have to decide whether he really wants to continue a brinkmanship game that locks the U.S. into the self-defeating Middle East policies it pursued during the Bush years.

For the truth is that Obama’s Iran policy represents the last vestige of Bush-era neoconservative extremism. The moralistic, shrill, militaristic Manichean worldview that brought us the “Axis of Evil” and the Iraq war is gone – except when it comes to Iran.

Obama’s schizoid foreign policy – extreme and ideological on Iran, pragmatic and flexible everywhere else -- was brought into sharp relief this week. Even as the Baghdad summit broke down, events elsewhere in the Middle East and South Asia demonstrated the utter failure of Bush’s approach – and provided a cautionary warning to Obama of the follies of continuing it with Iran.

Start with Iraq, where Bush’s nine-year-long military adventure is coming to an inglorious end. That unprovoked invasion was supposed to bring an end to an evil regime and transform the Middle East – the same reasons neocons now give for attacking Iran. It left an ethnically fractured, horribly wounded land in the grip of a strongman that is just now emerging from a nightmarish civil war and is still plagued by sectarian violence and terrorism. Our moral responsibility predates the war: America’s crippling pre-war sanctions devastated Iraq’s entire society, and they were one of the reasons why it was so difficult to rebuild it. Congressional proponents of sanctions against Iran should take note.

Then there’s Afghanistan, where after 11 agonizing years we have essentially given up. Afghanistan has proven beyond the shadow of a doubt that even a superpower cannot always succeed in imposing its will, that cultural and anthropological differences are critical, and that trying to combine nation building and counterinsurgency in one of the most backward and impoverished places on Earth is a recipe for disaster. The best we can hope for now is that not too many more U.S. troops are shot dead by the Afghans they are training – and that the Taliban does not roll into Kabul the moment we roll out.

Next there’s Syria, where an appalling regime is locked in a brutal struggle with a murky opposition and where all the options are so bad that we have no choice but to remain on the sidelines.

Finally, there’s Egypt, where a nascent democracy is fighting to be born. Everything about this inspiring, painful and threatened revolution, culminating in this week’s elections, was generated by the Egyptian people themselves. America had nothing to do with it. Contrary to claims made by Bush apologists, the appalling example of Iraq was actually a disincentive to throw off Mubarak’s tyranny. As for the rise of the Muslim Brotherhood, that dire event so feared by neoconservatives and Islamophobes, they may turn out to be the stable, conservative, don’t-rock-the-boat party.

The lessons these different situations hold for our dealings with Iran are very simple. First, we have far less ability to control what happens in the Middle East than we think. In Iraq and Afghanistan, we tried to impose our will directly and failed. In the other two, we either do not have the ability to intervene (Egypt) or the risks of doing so would be too high (Syria). Second, none of these situations are susceptible to the kind of good-and-evil moralizing that characterized Bush’s approach to the Middle East. Individually they are incredibly complex, and as a whole they are even more complex. There is no simple way to approach any of them. Basing our policy toward them on a Manichaean, good guys vs. bad guys worldview is self-defeating. Bashir Assad is a bad guy, but if we sided with the rebels, we could unleash a civil war even more catastrophic than the one going on now. Some of the Salafis in Egypt may be planning to ban beer and abrogate the Camp David treaty, but if we tried to prevent them from taking power, we would be thwarting the will of those Egyptian people who want those outcomes. Nouri al-Maliki may be a sectarian thug, but the alternative could be worse. Hamid Karzai may be a corrupt, drug-addled charlatan, but he’s the guy who’s there.

And so on, down the list, from Pakistan to Hamas to Netanyahu to Libya. The real world, as opposed to the black-and-white world of the neocons, is all about complexity, grey areas, compromises, diplomacy, flexibility. It’s about accepting that America will have to deal with regimes that do not toe our line. It’s about realizing that our soft power is more effective than our military power. It’s about putting down the Big Stick and trying to actually listen to what the people in the region are saying. It’s the opposite of the Bush Doctrine.

Obama knows this, but the dead hand of neoconservative ideology still drives his Iran policy. Until he shakes it off and accepts that Iran is a regional power and must be dealt with realistically, even though it does not always share our interests, his Middle East policy will continue to resemble that of his predecessor.