"Snow White and the Huntsman": A would-be fantasy classic

Charlize Theron blows Kristen Stewart off the screen in "Snow White and the Huntsman," an unexpected summer delight 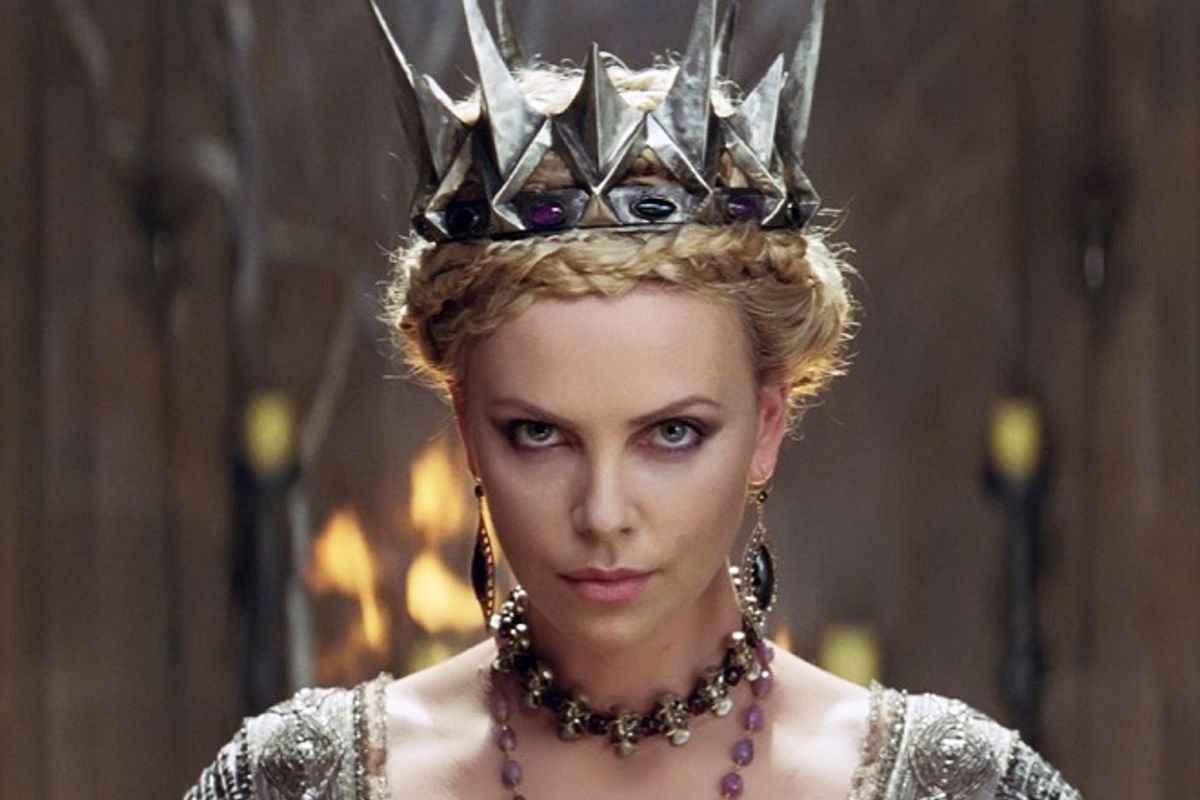 Charlize Theron in "Snow White and the Huntsman"
--

There's plenty of ambition and imagination on display from the first seconds of "Snow White and the Huntsman," along with an enthusiasm for the material that can't be faked and which makes up for at least some of the film's missteps. I resisted this derivative mishmash of classic fairytale and modern epic fantasy for as long as I could, but ultimately it swept me up into its geeky but manly embrace and carried me away on a white charger. English commercial director Rupert Sanders makes his feature debut with a splash, launching a fantasy-adventure franchise that probably isn't as good as any of the things it references -- the classic Walt Disney film, of course, but also "The Lord of the Rings," the Narnia series, "Game of Thrones," "Star Wars," Shakespeare and countless other works besides -- but comes close enough, I'd guess, to carve out its own niche and create its own fan base.

Mind you, a lot of things go wrong in "Snow White and the Huntsman," so many that it's surprising the film feels as exhilarating and entertaining as it finally does. The problems start with the central premise and the leading actress, but there are also the wobbly CGI effects, uncertain character arcs and unresolved subplots, not to mention the regional British Isles accents, which may be tough for American viewers to follow. (This is essentially a British film, although partly fueled with dollars from Universal Pictures.) Let's accentuate the positive, though, by beginning with the stunning and sinister Charlize Theron, who plays the usurper Queen Ravenna (aka Snow White's evil stepmother) as a proto-feminist vengeance seeker clad in a succession of delirious, lapidary outfits out of Jean Paul Gaultier's nightmares. (The costume designer is the estimable Colleen Atwood.)

An embittered beauty determined to resist the aging process -- she has moved on from Botox and plastic surgery to physically sucking the life force out of virgins and flowers, it seems -- Ravenna is such a complicated and intriguing character that Sanders and his team of writers run themselves into a version of the infamous "Satan problem" from Milton's "Paradise Lost." In that epic poem, the fallen angel Lucifer, who devotes all his energies to perverting and destroying mankind, is a much more interesting, and indeed appealing, character than God, a figure singularly lacking in dramatic possibility. It doesn't help that Theron's icy but tormented queen completely blows Kristen Stewart's anodyne and somewhat androgynous Snow White off the screen, leaving us feeling that the overdetermined pagan-Christian parable at the heart of this story -- the tomboy princess is The One to whom ancient forest beasts bow down, The One who will make the land bloom again -- is both unfair and rather dull.

I'm a fan of Stewart's, generally speaking, and will irritatingly add that I always think of her, first and foremost, as "that girl from 'Adventureland.'" She badly needs to get out of the business of playing storybook virginal princess types, however, and I hope she and the people around her have enough sense not to let Bella define the rest of her career. (I haven't seen "On the Road" yet; maybe that will help.) She cuts a fetching line in both gowns and suits of armor, but this Snow White -- who is sometimes Bilbo Baggins (and sometimes his Ring), sometimes Luke Skywalker, sometimes Joan of Arc and sometimes Henry V -- calls for both broad hambone instincts and a natural aristocratic bearing. Stewart possesses neither, looking and acting rather too much like a standoffish American girl faking a posh accent.

In fairness, I have no idea whom else I'd have cast or how well she'd have done. Sanders and his writers -- the story is by Evan Daugherty, who co-wrote the screenplay with John Lee Hancock and Hossein Amini -- never quite decide whether they're doing a sardonic, young-adult update of the 1937 Disney classic or cutting themselves free from that material and going back to its roots in European folklore. Mostly, in fact, it's the former: If the scene where Snow White gets lost in the forest scared you when you were 5, they seem to say, wait till you see the super-scary haunted forest we've got for you now! Cute bunnies? We're doubling down on the cuteness! Seven dwarves, you say? Well, OK then -- but let's make them debauched, violent, pseudo-Celtic little bastards! (The gang of dwarves includes Ian McShane, Bob Hoskins, Ray Winstone and Toby Jones, who are rendered small through both newfangled and old-fashioned trickery and are highly enjoyable, overall.)

Sanders mounts an impressive faux-medieval spectacle in the first third of the film, although he has little gift for action, and therefore the battle scenes are uniformly disappointing. We see how Ravenna seduces and destroys Snow White's father, locking the child princess in the tower and seizing the crown for herself. The resemblance to HBO's "Game of Thrones" (and the George R.R. Martin books behind it) may be coincidental, but it is nonetheless strong, and the intrigue even includes a semi-incestuous relationship between Ravenna and her perverted brother Finn (Sam Spruell), whose lecherous advances upon Snow White give her an opportunity to escape. Not daring to pursue the girl into the Dark Forest, Finn hires a drunken, widowed huntsman with no known name (Chris Hemsworth of "Thor" and "The Avengers") to fetch her back so his enraged sister can tear Snow White's heart from her breast and thereby live forever.

There's no denying that taking the repentant huntsman, a brief and buffoonish cameo role in "Snow White and the Seven Dwarfs," and making him the ennobled working-class hero of the whole story is an ingenious twist. Whether it pays off, I'm not sure. Hemsworth is an agreeable action hero with tremendous charisma, and the long midsection of this movie, as Snow White and the huntsman go on a Tolkienian voyage of adventure and discovery, is both enjoyable and predictable. Stewart's best and most delicate acting, in fact, comes as Snow White begins to wrestle with the unexpected possibility that this uncouth muscleman -- and not the effete, aristocratic William (Sam Claflin) who has loved her since childhood -- may be her real Prince Charming.

I don't think I can be accused of issuing spoilers when it comes to a fairytale, but let's leave a faint shroud of mystery over precisely how this triangle is resolved, or not resolved. Ravenna's delivery of the poisoned apple to Snow White is brilliantly done, perhaps the movie's best revisionist moment, but after that the momentum declines sharply. Snow White "dies" and is revived -- more mysteriously, and with less emotional impact, than in the Disney film -- and then she must lead her rebel troops into battle, delivering a knockoff version of the St. Crispin's Day inspirational speech from "Henry V" (which Stewart, frankly, can't pull off at all). This is a big, crude, cynical and impressive movie that will leave almost any viewer with mixed feelings, partly because it kills off its best character in what seems like an irrevocable fashion. It ends by virtually begging us to call for a sequel, stopping just short of an on-screen ellipsis and question mark. I'm inclined to conclude that "Snow White and the Huntsman" is a vigorous simulacrum of classic fantasy, rather than the real thing. But keep your expectations reasonable, and that's enough to make it one of the summer's unexpected delights.