Syrian forces target medical workers and hospitals, leaving the country's injured with no place to go 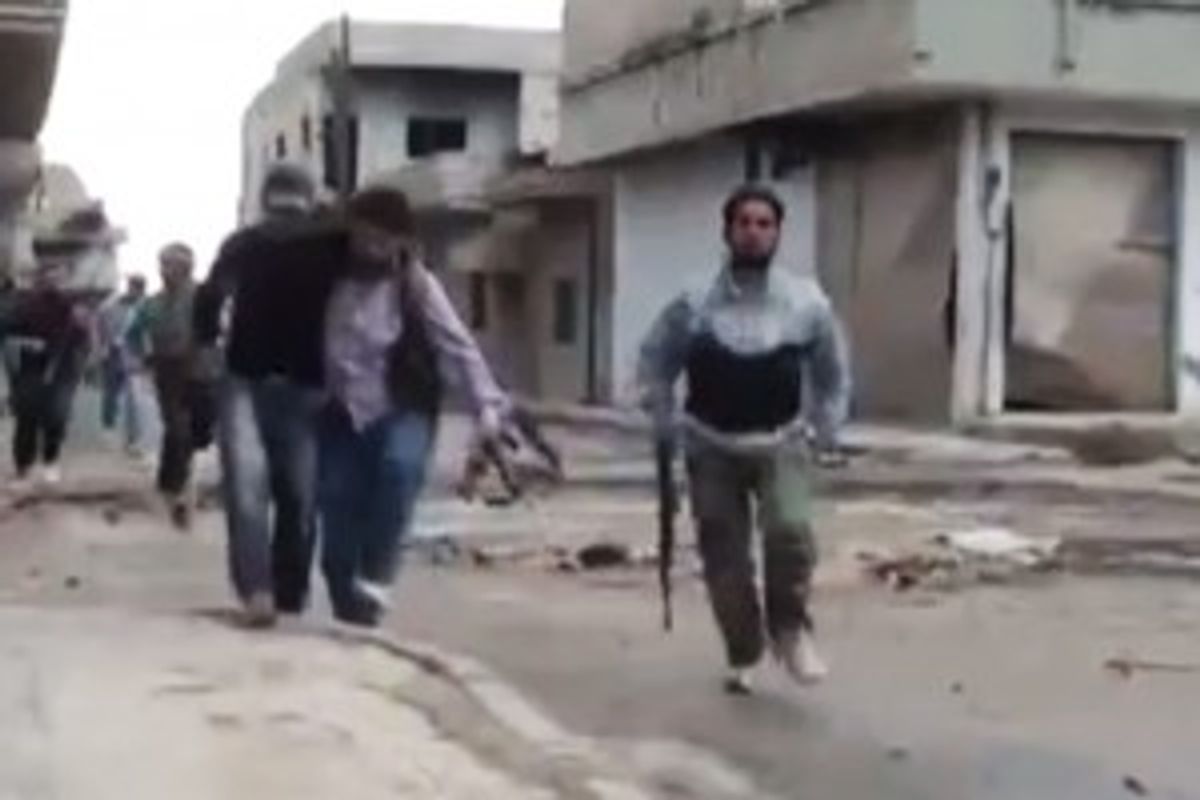 This image, made from amateur video released by the Shaam News Network and accessed Monday, May 14, 2012, purports to show a Syrian rebel helping an injured man in Rastan, Homs, Syria. (AP Photo/Shaam News Network via AP video)
--

JABAL AL ZAWIYA, Syria — The pickup truck swerved around the corner as three frantic men stood on the back screaming,“Go! Go!” Bouncing painfully between their legs was a man drenched in blood.

He was one of seven injured in a series of tank blasts last week in the village of Deersonpol, in Syria’s northern Idlib province. Four others were killed instantly in the attack by government security forces. Of the seven to undergo the harrowing route to the nearest “safe” hospital in Deir Alsharky, 12 miles of bad road away, three survived, three died and the whereabouts of the fourth remains unknown.

There were many hospitals much closer to the scene, but these are government run, and the risk of execution or arrest, particularly for those arriving with battle wounds, is so high that citizens throughout the area endure these dangerous journeys every day.

“Most of the death cases we see are because of the distance,” said Dr. Mohammed, a neurosurgeon who treated the Deersonpol cases at his clinic in Deir Alsharky. “Most bleed to death along the way. Today we lost three from injuries that could be treated if we’d got to them in time.”

Many doctors and patients asked to be referred to only by their first names for fear of authorities. Dr. Mohammed was no exception. After his home and his practice in Damascus were raided by authorities, he became wanted on the charge of treating injured demonstrators and members of the Free Syrian Army. He was forced to flee the city with nothing.

Due to the risks, secret hospitals have sprung up across the country. Some are manned only by untrained nurses. Volunteer doctors and surgeons working in primitive conditions run others, like Dr. Mohammed’s clinic. Immediately after surgery, the patients are sent to safe houses protected by the Free Syrian Army, where their condition is monitored.

Doctors Without Borders, an international nongovernmental organization, confirmed the government practice of targeting medical workers and patients in a report released earlier this month.

“We saw militarized health care facilities, meaning that access to medical care depends on which side you belong,” said Brice de le Vingne, the organization’s director of operations in Brussels. “Health facilities are being targeted, thus endangering patients and preventing health care workers from doing their jobs. Health facilities and pharmacies are looted and destroyed.”

Dr. Mohammed said most of his equipment is donated and smuggled in from Turkey. He shows a respirator, two new surgical sets and a radio that just arrived. Medical supplies and medications are always in short supply.

For some patients, the treatment they need is simply not available in these makeshift secret clinics.

In Maarat Al-Numaan, a government checkpoint stands by the city hospital. A few blocks away in a narrow alley is the door to the secret clinic. The doctor here, Ahmed Rawin, said they are afraid to keep patient records in case of a raid. They list only those who need follow-up treatment in the safe houses in a small notebook. Dr. Ahmed told the story of one recent patient in desperate need of life support.

“We moved him to the international hospital under a fake name,” he said. “Within days the soldiers came and killed him. They threw his body into the street.”

Many seek treatment in Turkey, but the journey is difficult. Rowad, 22, said he just returned from surgery across the border. As a member of the Free Syrian Army, he was injured by shrapnel during a clash with government forces. Nerve damage caused him to lose feeling in his right leg. After surgery performed by Dr. Mohammed, members of the Free Syrian Army snuck him across the Turkish border for follow-up surgery.

“Most of the way we managed to go by car, but they had to carry me for about three kilometers,” said Rowad, who still has no feeling in his leg, but can now walk with the help of crutches.

Dr. Mohammed said in the past week he has sent three urgent cases across to Turkey. Two died en route.

Activist Abdul Aziz Agini, who works with the Free Syrian Army near the Turkish border, said he receives requests to arrange transport for patients almost daily.

“We suffer a lot to get them there. We must carry them on our backs,” he said.

There isn’t enough manpower for everyone, however, and many in desperate need of medical treatment must wait to find a safe passage.

In Ariha, another town in Idlib province, the smell was nauseating as a 60-year-old man removed a bandage from his infected feet — most of the skin and flesh was gone. The man, who works as a butcher, was arrested at a checkpoint. His court papers say he is accused of “participating in demonstrations.” He was held and tortured for 45 days.

“They hit my foot with a wire cable telling me to confess,” he said, adding that he was released 10 days earlier. “When they took me to court, they had to carry me. When the judge saw me, he didn’t even question me. He ordered my release.”

So far, the route through Turkey has been too dangerous for someone in his condition. Until now he has been unable to get any treatment.

“We are in a large concentration camp called Syria,” he said. “My fate is in God’s hands.”

Volunteer doctors say they receive many cases of torture by authorities. Treating these patients often leads to their own arrest. Dr. Najib Aledel has been imprisoned twice for his work in a secret hospital in Ariha. Ten days after his last release, Dr. Aledel said he was back on the wanted list.

“There was no injury for me,” he said in reference to his two months of total prison time. “But I saw very bad deeds happen to others, and there is no [medical] treatment inside the prisons.”

Dr. Aledel said the cease-fire agreement between the government of Bashar al-Assad and the Free Syrian Army is in name only. The patient number has dropped, but not significantly, he said. And medical supplies, he said, are so low he and his staff often give their own blood to patients in need of transfusions. He said there are no humanitarian groups or overseas aid, and the only supplies come through private donations, both local and international. In all clinics, doctors said they desperately need more support from abroad.

Mohammed, an activist and pharmacist that secretly supplies these underground clinics in Ariha, believes these attacks on the medical system are yet another way to instill fear into the people.

“The government is aiming for social chaos so people will get desperate and ask for the government to come back,” he said. “But now we have started. There is no going back.”