Another Republican primary, another big night for the Tea Party movement – and another blow to the Senate 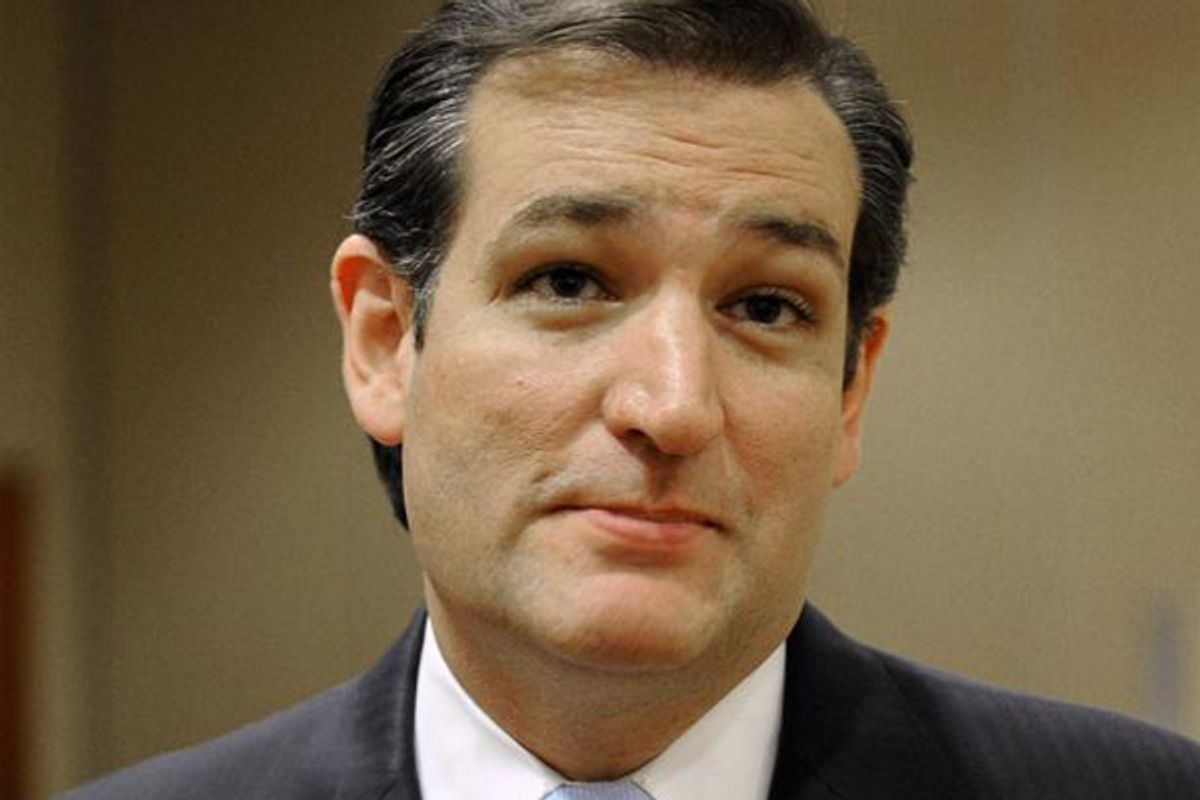 The Tea Party candidate fell 11 points short in Texas last night, but the result still counts as a major victory for the movement. By holding Lieutenant Governor David Dewhurst under 50 percent, Ted Cruz, a former state solicitor general who ran with the support of prominent national Tea Party leaders, earned his way into a July 31 runoff election.

The two men are vying for the Republican nomination to succeed retiring Sen. Kay Bailey Hutchison. Even though Dewhurst won last night’s preliminary vote by a 45-34 percent margin, Cruz has a very good chance of prevailing in the second round. For one thing, momentum is on his side. Most of Dewhurst’s advantage last night came from a lopsided edge among early voters; with those who cast their ballots yesterday, the contest was much tighter. And now that Cruz has cleared the preliminary hurdle, national conservative groups – and maybe a super PAC tycoon or two – figure to take his candidacy even more seriously, which could result in a flood of money.

The important point to remember here, as Alex Seitz-Wald explained yesterday, is that there really isn’t much of an ideological divide in this race. Dewhurst, who has served as Rick Perry’s lieutenant governor since 2002, would be a very conservative vote in the Senate – to the right of Hutchison and John Cornyn, the state’s other Republican senator. But Dewhurst’s establishment support and his fixture status in state politics (he’s been in statewide office for 14 years) aren’t the best match for the GOP’s Tea Party-era base, and this has created an opening for Cruz to run as the “pure” alternative.

For understandable reasons, Cruz has tried to portray this as a showdown between the party’s conservative and moderate wings. But those kinds of fights are relics of a different time. Today’s GOP, especially at the national level, is a cohesively conservative party, one that has moved ever farther to the right in the three decades since Ronald Reagan’s 1980 victory.

The Tea Party movement isn’t about purging moderates; that happened a long time ago. It’s about forcing the entire GOP to embrace a partisan warfare style of governance. When it comes to the Senate and House, that means electing candidates who will shun compromise with Democrats and exploit every possible legislative tool to advance their own agenda and stall the other party’s. It is about absolutism.

As Richard Mourdock, who knocked off Richard Lugar in Indiana’s GOP Senate primary earlier this month, put it, “"My idea of bipartisanship, frankly, going forward is to make sure we have such a Republican majority in the U.S. House, in the U.S. Senate and in the White House that if there is going to be bipartisanship, it's going to be Democrats coming our way instead of them trying to pull Republicans their way.”

Mourdock was the first high-profile Tea Party primary winner of the 2012 primary season, and his triumph was followed a week later by the surprise victory of Deb Fischer in Nebraska. Now comes Cruz’s strong performance, and the potential for an outright victory in the runoff. There are other possibilities still on the board too, like in Wisconsin, where former Gov. Tommy Thompson could have a lot of difficulty in the August 14 GOP Senate primary. And all of this, of course, comes on the heels of 2010, when several Republican establishment heavyweights went down in primaries (or, in one case, a state convention).

In some cases, these Tea Party primary wins can have real general election consequences. In ’10, Republicans would have won Senate races in Nevada and Delaware (and probably Colorado, too) if they hadn’t nominated candidates with fringe credentials and erratic tendencies. This year, Mourdock’s win has put the Lugar seat in play for Democrats, while Fischer’s Nebraska victory was exactly what Bob Kerrey, the Democratic nominee was hoping for (even if Fischer remains the clear favorite there). In the case of Texas, though, the Dewhurst-Cruz runoff outcome won’t matter for November. Republicans will hold the seat either way.

To find the real impact of a primary like last night’s, you’d probably have to get into the heads of the current Republican members of the U.S. Senate, especially those who will be up for reelection in 2014. They can see that the revolt of ’10 hasn’t died down – that the party base is just as hungry for “purity” and offended by insider-ness as it was two years ago. The more they modify their behavior to conform to this, the less productive the Senate will be. And, as you’ve probably noticed, it isn’t all that productive to start with.