The tyranny of pink

The author behind a new documentary tells Salon how breast cancer got cute and where Susan G. Komen lost its way 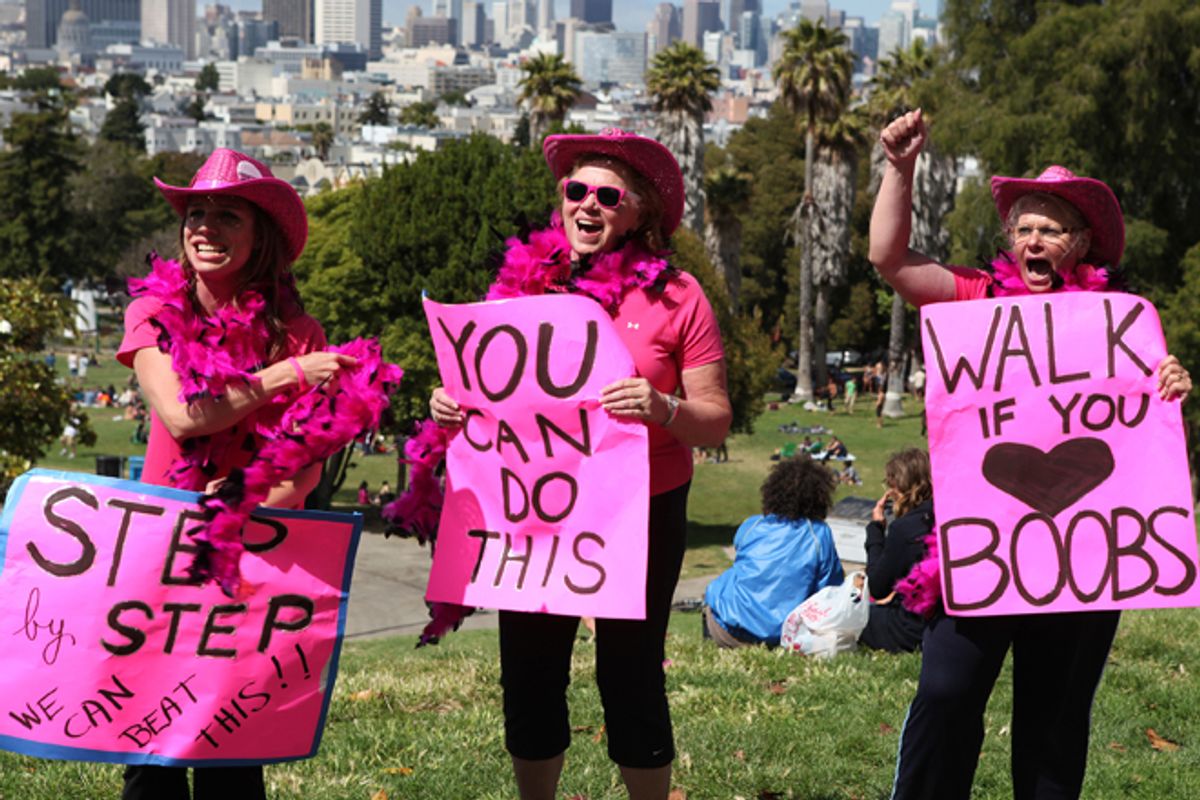 Why wait for October for breast cancer awareness? There couldn't be a more perfect moment for director Lea Pool's new documentary "Pink Ribbons Inc." -- a searing, passionate and deeply human examination of the warping of a cause.

It's been a shaky year for the pink. In January, the Susan G. Komen Foundation, the undisputed center of the breast cancer universe in its be-ribboned, Schiaparelli-hued incarnation, made the spectacular misstep of attempting to withdraw funding for breast cancer screenings at Planned Parenthood. Though the howls of public outrage forced the foundation to back off – and prompted the resignation of its vice president for public policy, Karen Handel -- the debacle was just the latest and most grotesque move from an organization ostensibly devoted to women's health. There was the ill-advised, high-profile partnership with Kentucky Fried Chicken, a name not exactly synonymous with good health. There was a saturation of merchandising, including a perfume of questionable toxicity. No wonder registrations for this year's Race for the Cure are down, as Komen continues to be dogged by questions about its integrity.

Now comes another blow to what author Barbara Ehrenreich (who has written with fabulous brio about her own experiences in the trenches) shudderingly calls "breast cancer culture." Based on Samantha King's book "Pink Ribbons Inc.: Breast Cancer and the Politics of Philanthropy," the new documentary manages to be devastatingly persuasive about the futility of buying, say, an auto manufacturer's "Warriors in Pink" gear as a gesture toward stamping out disease, while remaining profoundly sensitive to the good intentions of someone who might. Pool's cool juxtapositions are incredibly convincing -- in the way she presents the spirited, moving testimonials of pink-clad women running and walking at various events for "the cure" right beside the glib hucksters at the Fuze Tea and Yoplait event booths, oblivious to the piles of garbage rising in their wake.

Interspersed throughout, there are interviews with everyone who's anyone in breast cancer. There's Ehrenreich, who blisteringly attacks the "sentimentality" of cutesy breast cancer campaigns by saying, "I'm not six years old." There's Dr. Susan Love, who questions why, with billions of dollars going toward "the cure," we're still using "slash, burn and poison" treatments and spending next to nothing on investigating the causes of the disease. There's Susan G. Komen CEO and founder Nancy Brinker, who ominously says, "There's not enough pink" saturating our culture. And, hauntingly, there are the members of an Austin, Texas, support group for women with Stage 4 cancer, who describe the exhausting pressure of having a disease with such an upbeat, "Yes we can!" identity. "You're the angel of death," says one. "You're the elephant in the room." Put together, the film makes an exasperating, infuriating argument for why we must, as Susan Love says, "learn to ask questions and not just raise money and hand it over."

Reducing breast cancer – a complex disease with different manifestations – into a single entity for which there could be a single, magic bullet "cure" may sell T-shirts and mammogram machines. But it doesn't begin to address the insidiously complicated nature of cancer or why it strikes women in the first place. Yet there's money to be made in the notion of a "cure" – a slippery word you will be hard pressed to find anyone in the world of cancer treatment ever using. But "Race for the No Evidence of Disease" just doesn't have the same easy ring to it. Nor does the expensive, unsexy environmental and social change required to identify and eliminate the roots of cancer.

There was once a time, in the distant past, when breast cancer was not a cheerful lipstick shade. It was not warm or soft or fuzzy. It was not an opportunity for gratuitous ogling wrapped up in the guise of "saving the boobies." And it sure as hell wasn't the best thing to happen to consumerism since Christmas. But as the film makes clear, while the disease itself remains as vicious and harrowing as ever, the response to it has evolved. And what began as activism about a serious women's health issue has morphed into an excuse to go shopping.

As "Pink Ribbons, Inc." author Samantha King tells Salon, "People now understand disease through the lens of consumption. I talk to people who can't really think of doing good work outside of selling or buying stuff. That's not their experience. They haven't been exposed to alternatives." She goes on to explain, "Thirty years ago, it would have been unfathomable that breast cancer could generate this much support and attention and corporate funding. There was a lot of feminist awareness in the '80s around breast cancer and women's health. And some very smart people caught on to that and appropriated it and turned it into a marketable product."

As the film tidily illuminates, ever since the Reagan era of corporate philanthropy, "cause marketing" has become a massive growth industry. With women representing 80 percent of consumer dollars spent, wrapping one's products and services in the guise of taking care of the ladies is just "business as usual." If that business includes breast cancer drug manufacturers who also happen to be in the business of pesticides and pink-ribboned cosmetics that contain unregulated chemicals like formaldehyde, well, what's the problem? And if there's a grand gesture to be made in bathing the Empire State Building in bright pink light or littering Times Square with pink ticker tape, who cares if that has squat to do with the frightening reality of illness?

One of the most revealing moments of the film comes when an upbeat marcher for the cure declares her reason for being there. "You feel helpless and you want to do something," she explains. But what if that something is worse than nothing? What if it's doing more to line a CEO's pocket than to assure that fewer women will suffer and die from this monster? What if, instead, it's subjecting women with cancer to what Ehrenreich calls "the horrible tyranny of cheerfulness"?

As King tells Salon, "Raising money doesn’t automatically equate change. In fact, the way that this particular fundraising phenomenon works is to reinforce the status quo. It funds the same kinds of research that ask the same kinds of questions instead of research that might look into prevention or reduce the incidence rate." But she understands the insidious appeal of pink. "People are really busy," she says, "and this stuff is fun and makes you feel nice. But that kind of solidarity and community is fleeting, and it doesn't sustain a political movement. I hope this film changes the conversation around what it really means to do good."

"Pink Ribbons, Inc." opens in New York and Los Angeles on June 1, and in selected cities throughout June.