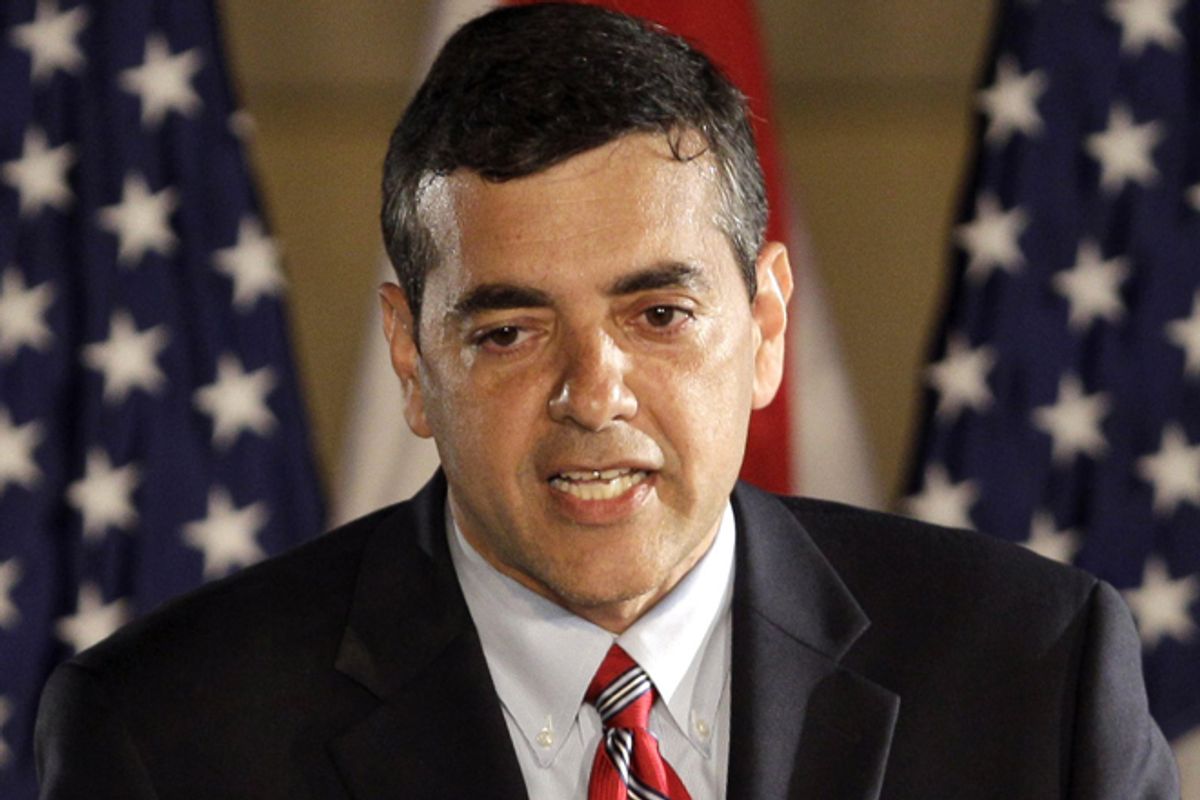 A Hispanic Republican from Florida boldly broke with his party's orthodoxy on illegal immigration yesterday, introducing a bill to help undocumented young people stay in school -- but it wasn't Sen. Marco Rubio.

While the Florida senator's much-touted but still vague plans to offer a GOP version of the DREAM Act have yet to materialize, Rubio's friend Rep. David Rivera of Miami introduced the Studying Towards Adjusted Residency Status (STARS) Act, which would allow undocumented high school graduates who arrived here at a young age and are accepted into a university to apply for conditional non-immigrant status that could put them on an eight-year path to citizenship.

Rivera's initiative came as leaders of United We Dream, a leading group of undocumented students, presented White House officials with a letter signed by more than 90 immigration law professors who argued that the president has “clear executive authority” to halt deportations of students who might benefit from such legislation, according to the New York Times. The Obama administration says its policy of "prosecutorial discretion" spares otherwise law-abiding young people, but student groups such as the National Immigrant Youth Alliance say the administration has broken its promises.

The students, disenchanted with Obama's failure to secure passage of the DREAM Act in 2010, have expressed interest in Rubio and Rivera's proposals as a way to save young people from being deported from the only country many of them have ever known. With the latest poll of Latino voters showing Mitt Romney trailing President Obama by 34 points, Hispanic Republicans have been looking to moderate the party's hardline stance against illegal immigration. Without a change in the party's image, said one Texas Republican this week, the growing Latino demographic may transform Texas into a Democratic bastion by 2020.

But this week Rubio took an inspection tour of the U.S. prison at Guantanamo, which seemed intended to burnish his foreign policy credentials as a possible vice presidential candidate, and left immigration to Rivera, his former ally in the House, who is under investigation for tax evasion.

Rivera said he was moved to introduce the bill by the story of a constituent, Daniela Peleaz, who came to the United States from Colombia with her family when she was four. Now Peleaz, a high school valedictorian who has been accepted to Dartmouth, faces the possibility of deportation.

The legislation authorizes the Secretary of Homeland Security to suspend the deportation of an undocumented immigrant and to grant him or her temporary non-immigrant status if he or she is 19 years of age or younger, arrived in the U.S. before age 16, has lived here for five consecutive years and has been accepted by a four-year college or university. After five years, those students who have graduated could apply for a five-year extension of non-immigrant status. After eight years of non-immigrant status, the students would be eligible to apply for permanent residence.

Rivera's bill faces the same obstacles that have stymied Rubio: a Republican presidential candidate who is uninterested in immigration reform as a campaign issue, a party on Capitol Hill that is actively hostile to the idea of helping undocumented youth, and a Democratic president who already seems to have the Hispanic vote wrapped up.

Rivera's initiative is even more limited than the limited approach that Rubio says he wants to take. Gaby Pacheco, a United We Dream leader, described the bill as a "¼ DREAM Act."

"It mirrors the DREAM Act with a component for achieving permanent residency after ten years, but it has no provisions for military service, and it applies to a much smaller group," Pacheco said. She said DREAM activists were nonetheless open to supporting the bill if it would spare any young people from deportation, but that they needed more time to study its provisions.

Ira Mehlman, spokesman for the Federation for American Immigration Reform, which favors reducing both legal and illegal immigration, dismissed Rivera's bill as a form of amnesty "that is not going to be acceptable to us or the vast majority of the American people."

Pacheco said the DREAM Act students enlisted the law professors to pressure the Obama administration to halt deportations while Congress tries to address the issue.

"Even Republicans are saying something needs to be done," she said. "We've been hearing from Celia Munoz [Obama's adviser on Latino affairs] that the president says, 'I wish had the power' to stop the deportations. Well he does."

The letter from the law professors said the president has wide leeway under the law to defer deportations.

“We did not want doubt about the president’s legal authority to muddy the waters of the debate,”  Hiroshi Motomura, a law professor at the University of California, Los Angeles, and author of the letter, told the Times.

But with the president reluctant to be seen as protecting illegal immigrants and the inability of Republicans like Rivera and Rubio to sway their party, the political prospects of relief for undocumented students are worse than ever.