ABC's new "Duets" is super nice, has no clear rules -- and insists on calling Robin Thicke a superstar 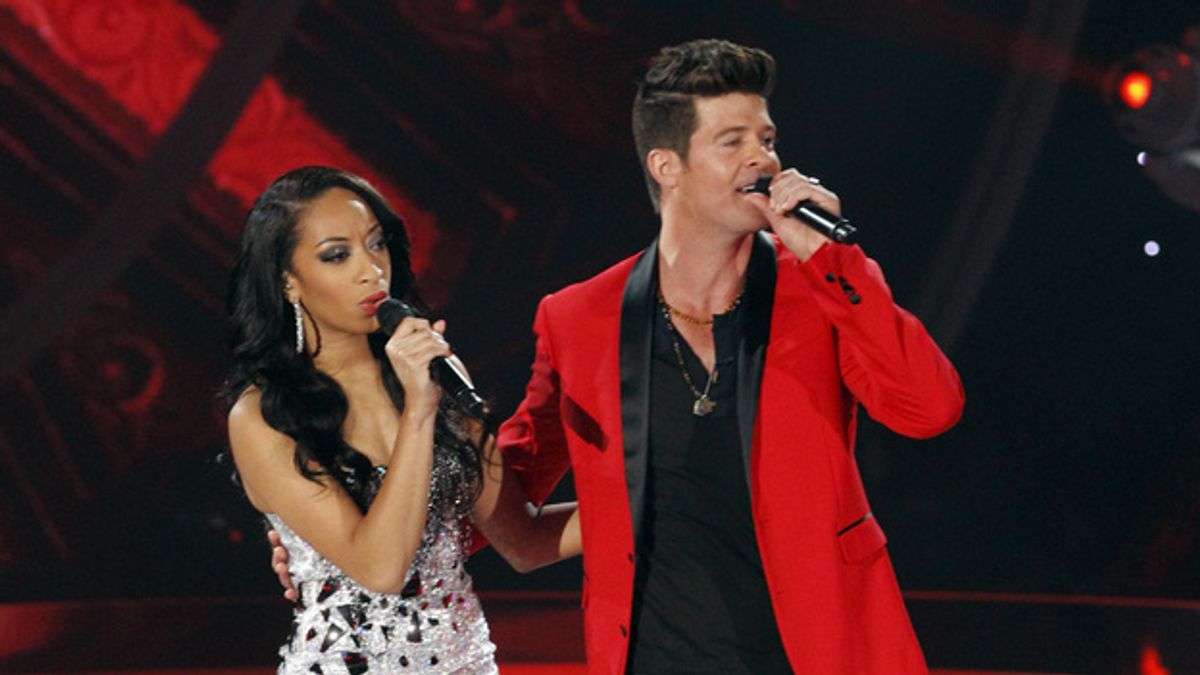 “Duets,” ABC’s tardy attempt to fashion a musical competition show of its very own, debuted last week. Perhaps hoping no one would notice just how late it had arrived to the “American Idol” knock-off party if it behaved like it had always been there, it premiered with no explanation of its own rules. (“Oh, you must know all about me already! I have been standing by this punch bowl all night. Really!”) In the not highly rated debut, Kelly Clarkson, Robin Thicke, John Legend and Sugarland’s Jennifer Nettles — a quartet referred to at every possible opportunity as “superstars”—  each selected two amateur singers with whom to perform a duet. The amateurs then received feedback from the other superstars on their performances. At the end of the night the eight contestants were ranked on a “chart.” How were the rankings on the chart determined? What were they a measure of? Would the contestants at the bottom be kicked off the show? Would the contestant at the top win something? Would the contestants in the middle have to perform a cappella while doing an interpretative dance about the word “superstar” and hanging from a trapeze? Who could say? No one who watched the show.

Tonight’s episode of “Duets” then, in which the rules are largely, if not entirely explained, effectively works as a do-over. Each week, the performances are graded — anonymously — by the superstars, and it is their feedback that determines the amateurs' chart standings. (There is a moment in tonight’s episode when the first performer of the night is told her place on the chart. Anti-climactically, it’s the top one, because she is the only person yet to have sung. “Duets” is still working out its showmanship kinks.) Starting next week, the two contestants at the bottom of the chart will have to face-off in an a cappella duel (no trapeze sadly), and the loser will be kicked off the show. In six weeks' time, “Duets” will go live and the audience will begin to vote on the outcome of each episode. (As to how the victor of the duel will be determined or what the ultimate winner will win, see the “not entirely explained” clause above.)

When written out, these rules may sound boring enough to seem like the sort of yawn-inducing information a TV show could reasonably hope to spare its audience. But they matter. On all the other major singing competitions, after the winnowing down of the audition rounds — those dark weeks when it becomes clear that America lacks for neither competent singers capable of melisma or the disturbed and delusional — it’s the audience that decides who stays and who goes. On “Duets,” for the next six weeks four relatively articulate performing professionals will be the deciders. “Duets” is temporarily putting off the rowdy, democratic voting process, and its tendency to favor sleepy-eyed white boys, to practice the more aristocratic style of expert judgment found on Bravo’s competition shows. “Duets” may be ABC’s answer to “Idol” and “X Factor,” but in rare moments, it’s also the singing version of “Project Runway.”

Though the four judges are too nice (they start and finish each comment with something like, “I love you,” or “you’re great”) they are also informed. They give feedback — the singing is pitchy, too perfect, too scared, the mic is too close, the dancing is bad. “Duets” does not embrace the sort of serious crit sessions seen on “Runway,” “Top Chef” or “Work of Art,” and it would be much better if it did. The judges seem up to it — not only does Kelly Clarkson effortlessly remain more likeable than anyone who has ever appeared on reality TV, I suspect that there is a Nina Garcia lurking inside of John Legend, whose high standards and perfectionism are belied only by the goofy, childish, wide-eyed expression he gets whenever he is watching a performance he enjoys. Real criticism would also rescue the show from its current in-between state, in which it drags on like any bloated musical performance show, but without the energy or stakes of one since, thus far, “Duets” is pre-taped.

The judges' participation adds a nice new wrinkle to the format. Though it may mean that we will never get to know the amateur contestants well (this show could be called “Singing with the Stars,” despite the reversal of expertise), it should fuel some future sharp exchanges. Kelly Clarkson may not want to lay in to a reality TV contestant, but she can feel no such compunction about digging in to the over-confident Robin Thicke.

That the judges are performers delivers the same message --albeit at a much softer, less-compelling volume -- as those Bravo shows: Talent is great, but greatness is hard, hard work. Robin Thicke may seem most concerned with making himself appear sexy, and Jennifer Nettles may not be able to contain her inner cheeseball, but they, like Legend and Clarkson, are professionals in the most complimentary sense of the word: reliable, knowledgeable, focused, dedicated. What they demand of their duet partners is surely nothing compared to what they demand of themselves. Clarkson, especially, is the embodiment of this. Exactly a decade ago she won the first season of “American Idol,” and she is now back on reality TV mentoring the two least polished, most insecure contestants on “Duets.” She chose them, she says, because they both reminded her of herself. She may be right, but they have lots and lots of work to do before before I see it.