Origins of a healthcare lie

The unknown history of the argument against the individual mandate 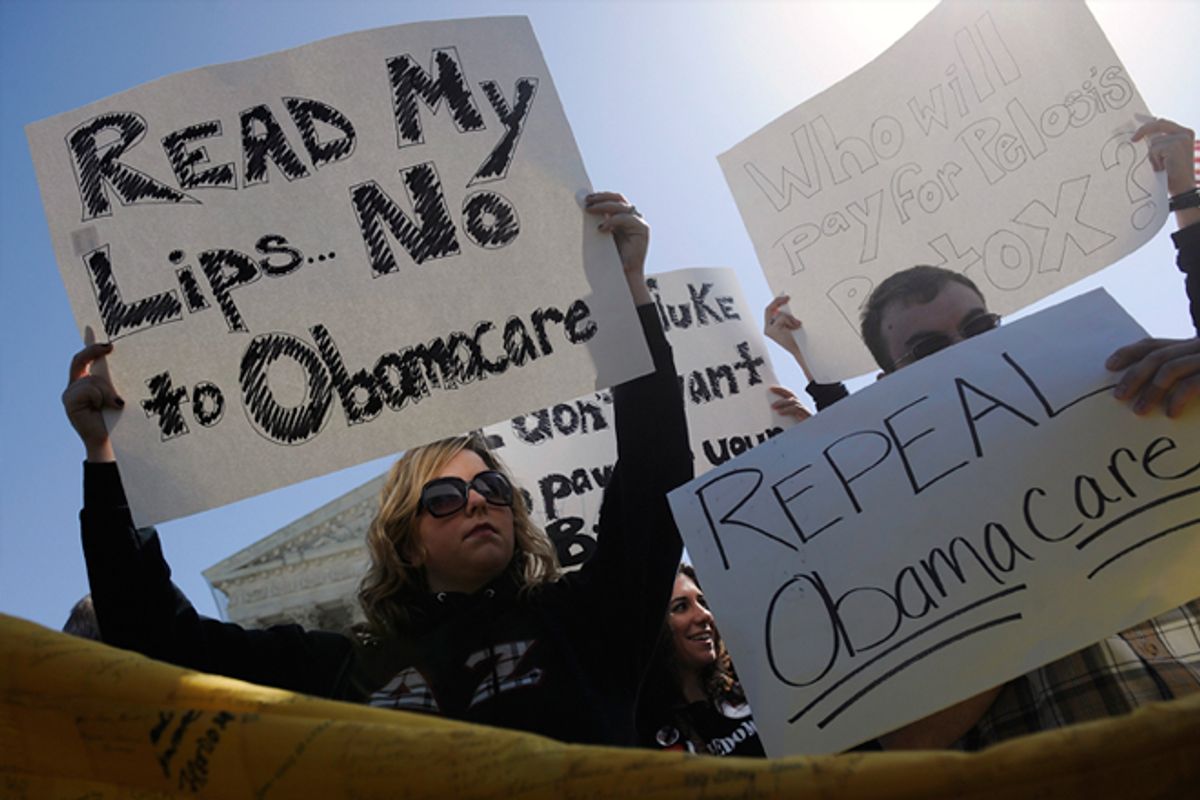 Professor Michael McConnell, the distinguished constitutional theorist, has weighed in, to my knowledge for the first time, on the healthcare reform case pending in the Supreme Court. He writes in a recent Wall Street Journal op-ed that “[t]he drafters and defenders of the health-care law have only themselves to blame for this mess.” This is because “they did not take seriously their obligation to legislate within the limits set by the Constitution.”

Prof. McConnell's essay includes some uncharacteristically sloppy statements, as Sam Bagenstos points out. But he asks a good question: Why didn’t the Democrats see this trouble coming?

I’m now working on a book on the constitutional objections to the Affordable Care Act, which will be published in the spring of 2013 by Oxford, and I’ve been researching this very question. What I’ve found may be surprising.

The constitutional limits that the bill supposedly disregarded could not have been anticipated because they did not exist while the bill was being written. They were invented only in the fall of 2009, quite late in the legislative process.

The first exploration of Congress’s authority to enact a mandate was a paper by Mark Hall, which he posted on SSRN in February, 2009. (I have not been able to find even a hint of the constitutional objection before Obama's election, even though mandates have been proposed, mainly by Republicans, since the early 1990s.) He concluded that the mandate easily followed from existing commerce clause jurisprudence. His piece is extensively footnoted, but it cites no authority to the contrary. Republicans had no constitutional objections. Senator Charles Grassley said in June 2009, “I believe that there is a bipartisan consensus to have individual mandates.”  (He later changed his mind.)

The first published claim of unconstitutionality that I have been able to find is a July 10, 2009, Federalist Society paper by Peter Urbanowicz and Dennis G. Smith. They created the now notorious action/inaction distinction, declaring that “Congress would have to explain how not doing something – not buying insurance and not seeking health care services – implicated interstate commerce.” But they made only a modest effort to rebut the obvious response based on text and precedent, and their bottom line was that a mandate “might be susceptible to an ‘as applied’ challenge from individuals who (1) never access the health care system or (2) are able to pay for their health care without using insurance.” Not only does this not suggest a facial challenge of the kind that the Court is now considering -- even they weren't that bold -- but the hypothetical individuals are fanciful.  No one who is not a multimillionaire can know for certain that they will be able to pay for all their future healthcare needs out of pocket.

On July 14, the House committees generated a unified healthcare bill, and the next day the bill passed the Senate Health Committee. On July 24, a Congressional Research Service memo, determinedly evenhanded, declared that the power of Congress to require the purchase of a good or service was “a novel issue.”  It, too, developed no substantive argument for unconstitutionality.

An August 17 blog post by Rob Natelson offered a litany of briefly stated constitutional objections, most of which were never heard from again. It was quoted sympathetically, but without elaboration, by David Kopel on the Volokh Conspiracy blog – the first post on that blog to suggest that there could be a constitutional issue. (The importance of the Volokh blog to the healthcare issue has already been noted, here.) On August 22, David Rivkin and Lee Casey wrote a Washington Post op-ed declaring that “[t]he federal government does not have the power to regulate Americans simply because they are there.” There were some follow-up posts on Volokh Conspiracy by Jonathan Adler and Ilya Somin, both of whom reluctantly concluded that the bill was clearly authorized by current law. (Both later changed their minds and will now tell you that the mandate is obviously unconstitutional!)

On Sept. 18, Randy Barnett entered the fray for the first time, with a post on Politico and a follow-up on Volokh. Suddenly the meme went viral. On Sept. 21, CBS News reported that, “In the last few days, a new argument has emerged in the debate over Democratic healthcare proposals.” CBS observed that the O’Reilly Factor and Fox News had picked up on the story. Suddenly there was an outpouring of pieces, on Volokh and elsewhere, developing the constitutional objection. But even at this point it was a soundbite, not a legal argument.

The bill passed the Senate Finance Committee on October 13, and the full House of Representatives on November 7.

The first sustained legal argument was published by Barnett and two coauthors in a Heritage Foundation paper on Dec. 9, 2009. This was no casual blog post. It carefully engaged the cases and the literature and closely tracked the argument that eventually was brought before the Court. Barnett deserves the credit he has gotten: Like so much of his work, the argument was witty, sophisticated, creative and clever. There had been nothing like it before. But it had little basis in existing law, and its flaws came to light almost immediately. Rivkin and Casey made a similar argument (which didn't add much, on the crucial commerce power issue, to their earlier op-ed) in a piece (undated) on the Pennsylvania Law Review's web edition. Jack Balkin wrote a devastating reply, to which Barnett posted a link and response on Dec. 11.

None of these writings said much about the most powerful basis for Congress’s authority: its broad power under the Necessary and Proper Clause, which has been well established since 1819. Barnett’s paper was a work in progress. By the time he wrote his Supreme Court brief in February 2012, he implicitly acknowledged this unfinished business by struggling for more than 30 pages with the problem.

The bill passed the Senate on Dec. 24. The rest of the story is familiar: On January 19, 2010, Scott Brown surprisingly won the special Senate election in Massachusetts, depriving the Democrats of their filibuster-proof majority. It took some time for them to figure out how to respond, but the legislative obstacles were surmounted, and the bill was signed in March 2010.

The Democrats might, I suppose, have jettisoned the mandate. Certainly by early 2010 they knew that constitutional arguments were being made. McConnell suggests that “the drafters of the legislation should have stayed within the generous bounds of authority established by prior precedent.” But that’s just what they did do. As Balkin noted in July 2010, Barnett was trying to shift the boundaries of what counted as an off-the-wall argument.

Dropping the mandate also would have defeated one of the law’s primary purposes. A Congressional Budget Office report indicated that eliminating it would raise the uninsured population in 2019 by 16 million, with insurance rates rising by 15 to 20 percent for those who bought insurance individually. McConnell thinks that the Democrats have only themselves to blame, because they did not toss these people over the side as soon as there was a whisper of a constitutional issue. As the oral argument made clear, the case against the mandate requires a remarkable degree of callousness, obsessively focusing on the minor burden imposed by the mandate while determinedly ignoring the fact that the unavailability of insurance kills thousands of people annually. Now we are told that the Democrats were unreasonable because they did not immediately capitulate to their opponents' newly crafted assumption that this callousness is written into the Constitution.

To say that the Democrats have only themselves to blame for not anticipating these newly minted constitutional claims is like saying John F. Kennedy had only himself to blame for not getting a second term as president because he should have anticipated Lee Harvey Oswald.