The D.C. paper thinks a story about Ann Romney's horse habit is worse than an exposé of the president's "kill list" 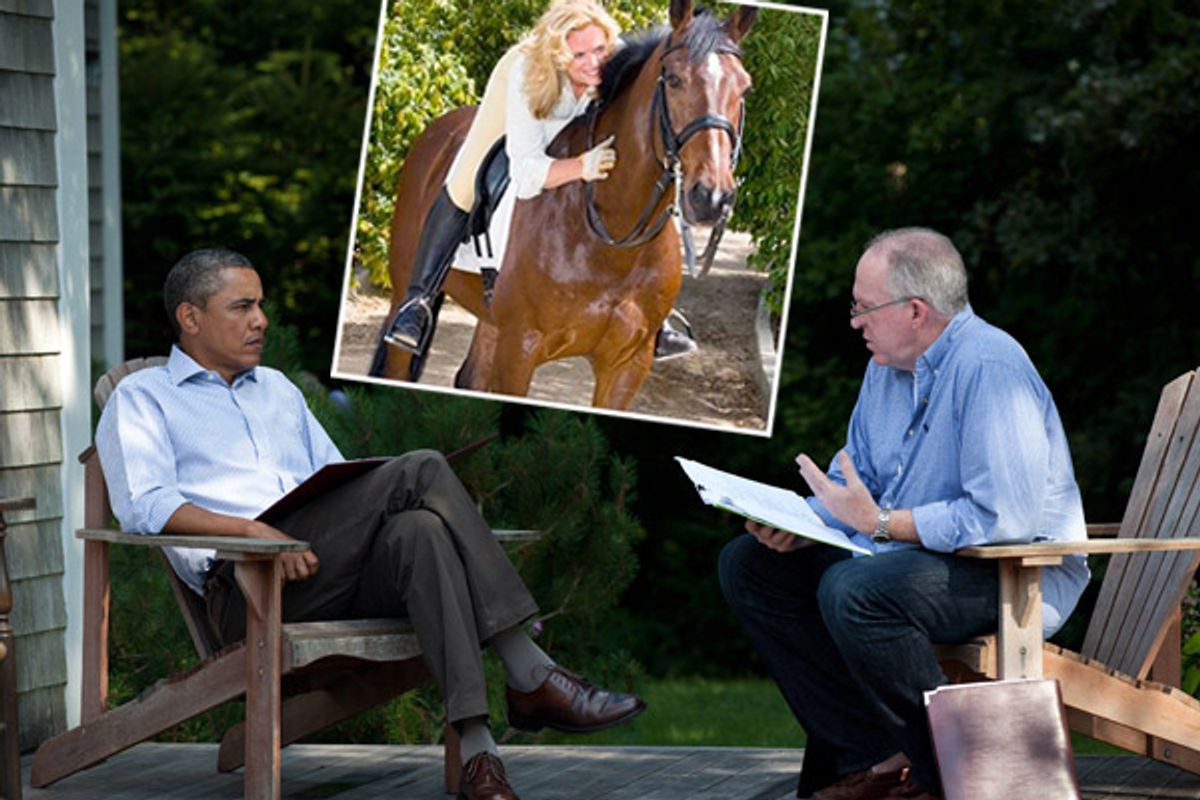 Jim VandeHei and Mike Allen have a really nice gig at Politico, so I don't know why they're trying out for a job with the Andrew Breitbart media empire. But that's what their deeply stupid piece decrying media bias against Mitt Romney, particularly at The New York Times and Washington Post, reads like. It could be the latest installment of Breitbart's whiny, posthumous "Nobody Vetted Obama So We Have to Do It by Printing Stuff We Know Is False!" investigative series.

The piece is just factually wrong. First of all, the Project for Excellence in Journalism tracked Obama-Romney media coverage this year and found that the president received far more negative coverage than Romney did. GQ's Devin Gordon took apart VandeHei and Allen here. He said everything I wanted to about the piece – most notably, the Times took the lead in reporting on Obama's ties to Rev. Jeremiah Wright, starting with Jodi Kantor's piece in April, 2007. Gordon found 2,950 references to Wright in the Times archives. Even if Gordon's math is off by a factor of 10, that's a lot of coverage.

Politico's faux-outrage that both the Post and Times "ignored" David Maraniss's story about Obama epic high school weed-smoking is silly, too: The future president inoculated himself against almost all drug revelations by revealing them himself in "Dreams from My Father." The memoir leaves little doubt that Barry Obama was a lost stoner in high school. Who cares?

Meanwhile, Matt Drudge's favorite journalists are angry that the Post published revelations about Romney's high school bullying. They seem to think high school behavior matters in the case of Obama but not Romney, just another example of the pervasive partisan double standard in media. But I don't want to say I learned nothing from the piece: It features populist Haley Barbour defending Ann Romney from the mean Times this way: “The New York Times does a huge exposé that Ann Romney rides horses. Well, so does my wife, and a few million other people. Watch out for equine performers!” You are so fricking losing the dressage vote, Team Obama! Take that!

The ultimate moral vacuum at the heart of the story is its failure to care that just two days after its "exposé" of Ann Romney's fondness for seven-figure horses and the silly costumes that go with them, the Times ran a chilling investigative piece about Obama's "kill list" process, with damning details about how the president decides on drone strikes and other methods of killing suspected terrorists.

The Times piece revealed that the administration has minimized its reported civilian casualties by counting all males killed, including minors, as "militants." It contains the detail that echoes George Zimmerman's thoughts about Trayvon Martin – that any young men in the vicinity of suspected terrorists must be "up to no good." The single most haunting revelation, to me, was the fact that political guru David Axelrod sits in on the "Terror Tuesday" meetings, evidence that the president's process is at least partly political. Oh, and "Terror Tuesday" isn't my juvenile label for the meetings; according to the Times, that's how they're known in the White House. I hope they got that detail wrong. It even quotes Bush CIA director Michael Hayden praising the president but urging a little more transparency in his process. When a Bush-Cheney intelligence operative is telling you you're keeping too many secrets, you maybe ought to think about it. (I'm going to write more about Obama, the Democrats, national security and "kill lists" next week.)

Politico's only mention of the piece comes within Times editor Richard Stevenson's email rebuttal to its charges. Clearly, VandeHei and Allen think a story about the president's controversial drone policy is less grave and potentially damaging than a close look at Ann Romney's dressage hobby. I can't think of a better example of the mindset that drives trivial, democracy-degrading political coverage. Politico didn't create that world, but it's the news outlet that was most deliberately invented and perfected to make sure we continue to live in it.