But I'm a good Mormon wife

Sean and I had the perfect life. Then his faith started to crumble -- and mine did, too 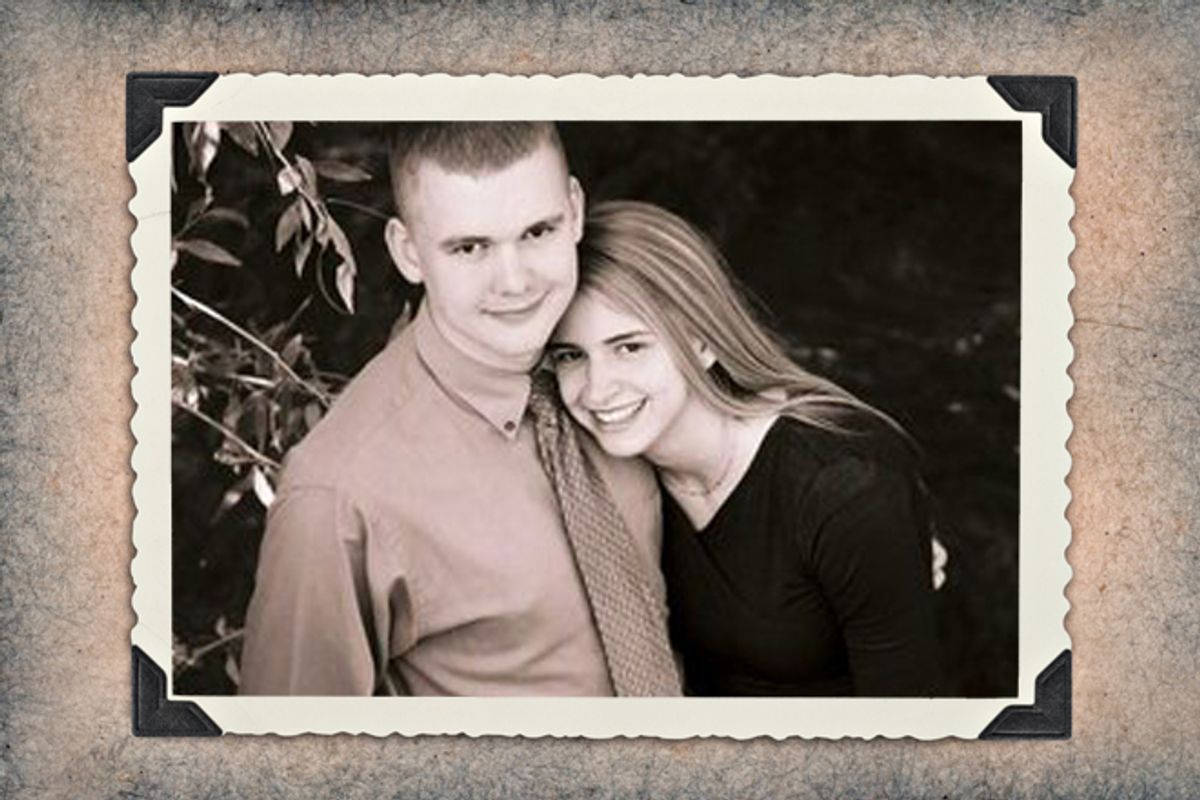 “I don’t believe in God,” my husband whispered in the darkness of our bedroom.

My breath caught, and I was afraid to look at him, this boy I met and married eight years ago.

I was only 19 on the day we were sealed for eternity, the wet snow blowing into our faces as we exited the Portland, Ore., temple. I imagined a life of Church service, my husband at my side as we finished our BYU degrees, raised our children, and served missions together in our old age. On the night we got engaged, we struck a deal. “I’ll get you to heaven,” I said. “But you have to keep me here on earth.”

Now his confession hung over our nuptial bed. And though I’d known this was coming -- he’d been struggling with his faith for at least two years -- I’d never considered what I’d say. Sean had always been the rational one, a brilliant computer scientist who spoke sense when I was in the throes of clinical depression. Now, my thoughts went still as I groped for his hand. Before I could process what I was saying, forbidden words slipped off my tongue. “You are more important to me than the Church,” I said.

I wondered what my pioneer ancestors would say if they could hear me, these grandparents so faithful that they abandoned their East coast relatives for a life here in this Utah desert. Some of their graves stood a few blocks from where I whispered my betrayal, but I didn’t care. I loved Sean, and that had to be enough.

But in the weeks that followed, there was a distance between us. We stepped lightly around conversation, kept talk to the kids, work and the mundane. Our friendly touches in the kitchen disappeared. My acceptance shifted to bitterness and anger.

I spent my morning runs worrying about what was being said around my Mormon neighborhood. We lived 20 minutes south of BYU’s desert campus, and most of my running partners had husbands high up in the Church hierarchy. I waited anxiously for them to mention my heathen family, wondered if they’d heard that my eternity with my husband was now in jeopardy, that in the hereafter I'd likely be pawned off to some other righteous man as a plural wife -- probably my ex-boyfriend; hopefully not Brigham Young. And all the while I couldn’t stop thinking. Why, Sean? I didn't sign up for this. You promised me we’d spend eternity together, and now you might as well be gone.

That sinister word flickered around in my head: divorce. It manifested itself onto my notebook paper as I scribbled out my daily morning pages. I didn’t want it, but sometimes I thought both of us would be happier if we said good-bye.

Sean and I spent our time in the usual way, taking long summer walks along Hobble Creek. While our two eldest sons raced ahead on their bicycles, we followed with the baby (okay, the two-year-old) in the stroller. Sean obsessed about death. “I’m so terrified of losing you and the boys,” he said one day after waving hello to our neighborhood women’s leader. He looked over at me and said, “I couldn’t bear it.”

Confused sadness flickered in my eyes. His fears were utterly foreign to me. We’d both been taught from an early age that death was simply the gateway back to God. How could he not see -- as I did -- that this was true? I know we'll be together again, I wanted to say. Instead I said gently, “I hope for your sake that you die first. Then you won’t have to deal with the grief of losing us.”

Sean was as supportive as an atheist could be. He even went with me for the first hour of church to help with the Squirmy Ones. But when he’d leave early, I’d cry in the bathroom, feeling completely alone. I never said that word aloud: Atheist. My heart clenched just thinking it.

We rarely talked about religion, yet it consumed us. When Sean replaced his temple garments -- the sacred underwear he’d promised to wear day and night -- with boxers, I couldn’t take it anymore. It was too much betrayal. I called up a neighbor with a husband like mine and cried. But instead of empathy, she offered questions that stunned me into silence. Was Sean addicted to pornography? Watching R-rated movies? What sin had brought him to this terrible place?

My tears stopped. Her questions were so off-base that they seemed absurd. She was sincere, and trying to help, but she believed what the Church teaches -- that a man would only leave because he’s disobeying the commandments. She couldn’t understand this was a rational inquiry. She saw everything as the result of sin.

This started my brain twitching. I knew Sean was still a good person, that he still maintained the same moral standards he had when he married me. The Church was wrong about him. What else might they be wrong about? I shoved the thought away.

But I wanted to understand him. This was Sean, the man who stood by me during years of clinical depression. The man who pretended to be a dinosaur while he chased our shrieking sons around the room. He wasn’t some heathen. I couldn’t believe that. I wouldn’t believe it. He’d always been a skeptic, and even though I didn’t agree with him, I knew intellectually that he’d never make this decision without careful consideration of the facts.

As summer shifted to fall, I often found him hunched over his iPad reading everything he could find on Mormon origins. I started to join him in his nightly bath, and the information would seep out. He’d pause from our usual safe topics and bite his lip. “I’m sorry, but I just have to tell you. Did you know that ...” and then he’d tell me what he’d been reading. About how Joseph Smith mistranslated some Egyptian hieroglyphics that are part of our canonized scripture. About how he translated the Book of Mormon while looking at a stone inside of a hat.

I listened half-heartedly, questioned his sources, though I wasn’t about to go looking at them myself. Our prophets had made it clear that anything written outside church documents was suspect and anti-Mormon, fabricated for the sole purpose of destroying faith. Yet Sean continued, until one night it was about polygamy, my archnemesis.

“Did you know that Joseph Smith married a 14-year-old girl against her will? Did you know that he’d send men on missions and marry their wives in secret when they were gone?” I sat there silent as he kept talking, a horror growing in my gut. I knew that if Sean was right, then Joseph Smith was a fraud. I saw no difference between his acts and the modern-day acts of Warren Jeffs, whom I abhorred. And if Joseph Smith was a fraud -- then what did that make the Church?

I left the bath early and went straight to bed, feeling a magmic pressure building inside me. The scholar in me couldn’t let it go. I had to know.

I already did know.

When I finally broke down a few weeks later, Sean was the one to hold me as I wept into my pillow and traipsed down the familiar road to despair, wondering what my life even meant if the Church wasn’t true.

“It’s OK, Maren. It’s OK. I’m here,” he said as he stroked my hair, whispering into the darkness. What felt like an end, though, slowly opened up into something else.

Over the next few days our usual mile walk turned to four as my brain tornadoed through discovery, my conversations stopping mid-sentence with “Whoa, then that means ...” Whoa, we suddenly have 10 percent more income. Whoa, our weekend free time just doubled. Whoa, we can try alcohol, coffee and tea -- the trifecta of forbidden drinks.

The sad whoas came, too. Whoa, will my father ever talk to me again? Whoa, what will my friends say? Whoa, we are going to die.

My transformation consumed me for the next month, and we stayed up late talking every night. When I shed my garments for slippery Victoria Secret panties, my self-esteem skyrocketed, and our late nights shifted to other things. We were finally adults, taking our firsts together, learning about each other without barriers.

Ironically, the Mormon Church teaches that marriage can only thrive if God is an equal part of it. But when we left God out of it, we were free to love each other completely, to share the burden of our grief as two individuals with no one else.

It’s been seven months now, and I don’t know what the future holds. I have never been more uncertain in my entire life. But one thing is clear to me. Whatever happens, wherever we go, Sean will be at my side, holding my hand as we face it together -- and alone -- for the first time.

Maren Stephenson is a writer who loves hiking, camping, and mountain biking in the Utah desert. She is currently working on her third book.